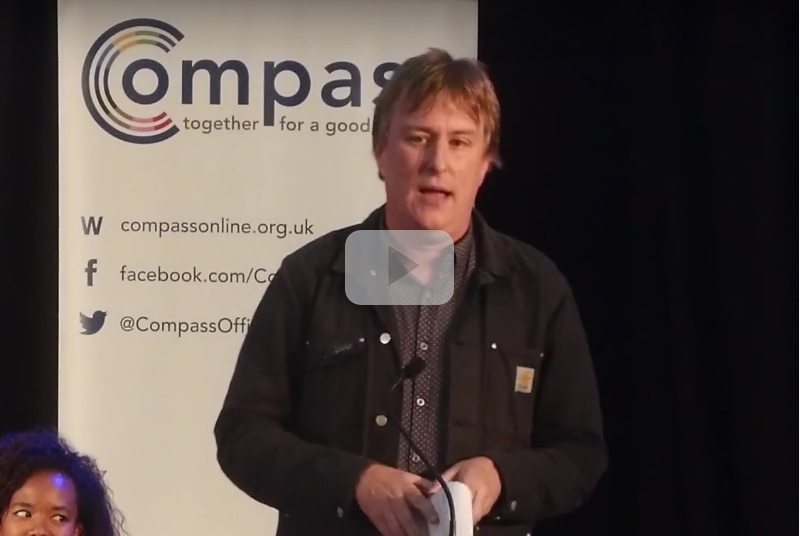 On 5 July, representatives from Britain’s main centrist and centre-left parties came together to discuss the need for a ‘progressive alliance’ at a London event called ‘Post-Brexit Alliance Building’.

Organised by non-partisan campaign group Compass, the forum explored exactly what a progressive political alliance could look like in today’s Britain. And one of the speakers in particular – journalist John Harris – gave a damning verdict on the current political environment in the country, explaining exactly why such a platform is more necessary now than ever before.

Speaking alongside Shadow Defence Secretary Clive Lewis, Green party MP Caroline Lucas, the SNP’s Tommy Sheppard, and the Liberal Democrats’ Vince Cable, Harris spoke about what had led certain working class communities in Britain to vote Leave in the recent EU referendum. Explaining the desperation of areas suffering from decades of industrial decay, he called on those who voted Remain to let the issue rest, saying:

If you woke up on Friday morning [24 June] thinking that the country you live in was suddenly being controlled by a social tribe you didn’t know much about – and you suddenly felt terrified about the future, bear in mind that that’s how millions of people in this country have lived for decades.

Having previously spoken of a “working class revolt” over the EU referendum – related to a feeling of voicelessness and anger at an out-of-touch political establishment – he urged people not to paint all Leave voters with a racist brush:

Please, let’s not think about the vast majority of people that I’ve talked about who voted Leave as stupid, or deluded, or bigoted and hateful.

Calling for the referendum result to be respected, and criticising the Labour party’s significant shift rightwards in recent decades, he said:

Please understand that the Labour party has left a vacuum in these places – a vacuum which has been growing for ten or fifteen years. And if this referendum is denied… UKIP… or something even nastier, may well clean up. It’ll sweep through these places, and the terrain for meaningful, progressive politics in this country will be pretty much destroyed. That’s how high the stakes are.

If you haven’t got progressive politics which speak to places which embody the inequality we all fight against, it’s not worthy of the name.

Finally, he called for a “collective resolution” from all progressive forces in Britain, based on:

going to places we… have forgotten about for far too long, listening to people, and beginning the process of coming up with a politics that finally… addresses their predicament and the awful inequalities that have defined this country for too long.

And making the case for a progressive political alliance to lead the upcoming Brexit negotiations, he said:

Let’s go out into the country and reinvent our politics.

Harris’ comments were met with rapturous applause, and came as a number of politicians and commentators have been calling for an alliance of progressive voices in the wake of the Brexit vote.

The Green party, for example, has been very vocal on the issue of creating a progressive alliance, urging:

politicians from the Labour Party, the Green Party, SNP, Plaid Cymru, the Liberal Democrats and other progressive parties to immediately begin talks about building an alliance ahead of the next election [with] a commitment to proportional representation [and the aim of] preventing the formation of a Tory-UKIP-DUP government that would seek to enact an ultra-right Brexit.

the best or only prospect for victory in the onrushing general election could be a broad progressive alliance or national unity platform of citizens and parties from the centre to the left.

And the Guardian‘s George Monbiot has argued that the divided Labour party of today must abandon its hopes of governing alone, insisting that:

Reshaping the political landscape with a progressive alliance and unity candidates is the best way for the British left to gain power.

If you belong to any of Britain’s progressive parties and agree that some form of alliance is necessary, make sure they know how you feel.

– See the full stream of the ‘Post-Brexit Alliance Building’ event, and more from John Harris at ‘Anywhere but Westminster‘.

– See other Canary articles on proportional representation and electoral reform, and support The Canary so we can continue to report on the issues that matter.