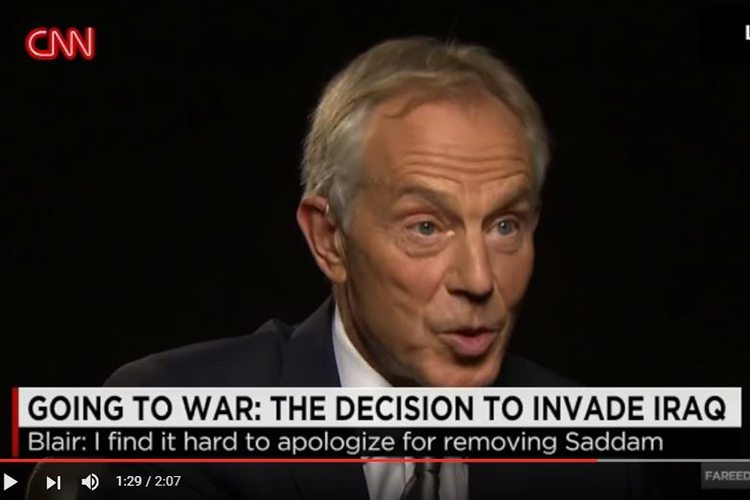 In the wake of the “polite but damning” statement made this morning by Sir John Chilcot, reflecting on his 2.6 million-word report into the British government’s policy decisions in the Iraq war, Tony Blair released an initial statement. It contained a quite stunning about-face.

Last year, Blair made a statement in which he conceded that the Iraq war was in fact influential in the rise of terrorism. Now, he has recanted. In his effort to counter the wave of responsibility imminently approaching his door, Blair now claims that the Iraq War is not the cause of terrorism in the Middle East.

Blair began the written statement by defending himself, outlining a few of the findings of the report that supposedly “lay to rest allegations of bad faith, lies or deceit”, and then acknowledged the Inquiry’s “real and material criticisms”.

I do not believe this is the cause of the terrorism we see today, whether in the Middle East or elsewhere in the world.

Later, in his longer public address, Blair instead blamed the continuing unrest in the region on the Arab Spring, despite previously acknowledging that his actions had contributed.

In an interview with CNN’s Fareed Zakaria last year, Blair said that there are “elements of truth” to the argument that the rise of ISIS is linked to the destabilisation that resulted from the prolonged military conflict in Iraq, and that “of course, you can’t say that those of us who removed Saddam in 2003 bear no responsibility for the situation in 2015.”

However, this was the defence he used as part of his response to the findings of the Chilcot report.

Blair has always staunchly defended his decision to invade and occupy Iraq. He has consistently claimed that he did not lie either to his cabinet, the government, or to the British public, and that he made the best decisions with the information he received at the time. In the CNN interview, Blair apologises not for his decisions, but “for the fact that the intelligence we received was wrong”.

Blair’s defence in the CNN interview last year was that it was “better that [Saddam] is not there than he is there”. On the question of ISIS, he had again referenced the role of Arab Spring:

It’s important also to realise: 1) the Arab Spring which began in 2011 would also have had its impact on Iraq today, and 2) ISIS actually came to prominence from a base in Syria and not in Iraq.

Blair’s ambiguous response on the ISIS question last year demonstrates how complicated, and ultimately frustrating and fruitless, any attempts at intervening (or not) in foreign conflicts can be. But his backtracking and refusal to accept any responsibility for the ongoing and devastating effects of Britain’s role in destabilising the Middle East, on the day of the Chilcot report, is a perfect illustration of why the public are so frustrated with the cold and detached behaviour by politicians. It does not fill us with confidence that they are willing to face the reality of their conduct on others lives.

The public want accountability from leaders for their actions – and in contrast, Blair’s attempts to defend his legacy, given the lack of evidence of weapons of mass destruction and the continuing unrest in the region, appears irresponsible. The more he ignores the fact that he did not have the required supported of the UN, nor the necessary oversight for the intelligence used to justify his decisions, much of his defence comes across as a self protection, something he appears to deem more important than accountability, responsibility, trustworthiness and atonement.

I will express my profound regret at the loss of life and the grief it has caused the families, and I will set out the lessons I believe future leaders can learn from my experience.

He reiterated his regret in his public address, outlining the timeline of events that informed his decision making, tearfully saying there was

no room for deliberation or negotiation […] it was my decision as Prime Minister […] I believed it was the right thing to do based on the information I had.

He also said that modern politics has “an addiction to believing the worst of everyone.”

The biggest lesson for current and future leaders is not that Blair’s decisions were easy and he simply took the wrong path, but how complicated his decision was, and how important it is to co-operate with external, neutral bodies; how crucial rigorous investigation of intelligence is; that without a follow up plan in place, any decisions are doomed to instability (which has been reflected also in the vote for Brexit); and that we should always, always follow non-military paths to resolution from a position of strength.

If military action is unavoidable, then it is so – but in this instance, it was not, and the Iraq war has proven that we need a revolution in our approach and thinking about our relationship to adversarial situations.

In the wake of a devastating decade, British people want a new direction for politics. They also want closure, acceptance and responsibility. They won’t get it – especially not from Blairites.

Read The Canary’s international articles, and articles about ISIS.