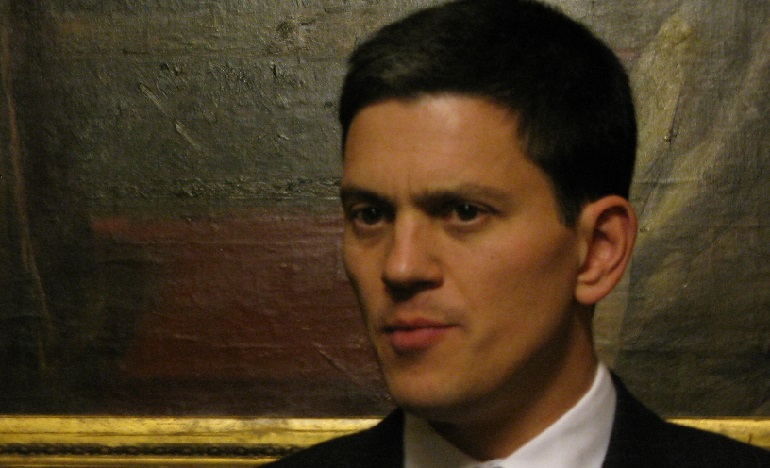 On 7 March, former Labour MP David Miliband called the new incarnation of Donald Trump’s Muslim ban “a propaganda gift for extremists”. And he’s right. It absolutely is. But worryingly, Miliband appeared to sense no irony at all when he spoke. Irony which is obvious to all those aware of the role that he and his ideological bedfellows played in forging the world we live in today; a world in which both ethnic and religious extremism are currently thriving.

The past gifted the present with extremism

David Miliband is the Labour leader who never was. The man people have called a “threadbare sock puppet of Blairism”, a “Blairite standard bearer“, “the heir to Blair”, a “core Blairite”, and a “smug, archetypal Blairite”. And while some have said it’s “misleading and unfair” to call him a ‘Blairite’, the label has stuck. Why? Because he believes it’s “a mistake” for the Labour Party to move away from the right and towards the left; and that “one can achieve more radical and substantive change through a different set of positions” (i.e. positions further to the right). To most, that will sound exactly like the philosophy of millionaire war criminal and former Prime Minister Tony Blair.

One of the most ‘substantive changes’ under Blair, of course, was the radical transformation of Iraq. His government’s participation in the invasion of that country – over unproven claims about former Western ally Saddam Hussein having weapons of mass destruction – truly paved the way for Daesh (Isis/Isil). The war killed over a million Iraqis and reportedly left thousands of children with deformities and cancer. And amid all that death and destruction, the context of anti-occupation resistance and the dissolution of the Iraqi army and state gave the forerunners of Daesh incredibly fertile ground to grow.

David Miliband consistently voted in favour of the invasion of Iraq and other military interventions abroad.

The wildfire continues to rage

Today, we are seeing the horrific effects of the extremist wildfire sparked by the war in Iraq:

In short, Blair’s invasion was one of the biggest gifts for extremists in recent history. And even Blair himself has acknowledged the link between the war and the rise of Daesh.

David Miliband recently said “Labour is further from power than at any stage in my lifetime”. And while the party’s membership has grown rapidly (to around 528,180) under Jeremy Corbyn’s leadership – making it the largest party in western Europe, it does indeed face massive challenges. But it was the likes of Blair and Miliband that created those challenges.

It was their New Labour government which used token progressive policies to hide its true right-wing nature. It was they who abandoned and ignored working class communities; continued financial deregulation to please wealthy elites; kick-started the privatisation of the NHS; propped up the very structures which created the capitalist crisis of 2007–2008; and lost five million voters between 1997 and 2010. And it is they who have taken every opportunity to undermine the popular and progressive alternative offered by Jeremy Corbyn, while failing to oppose the increasingly extremist Conservative government.

Blairism created a vacuum in working class communities. And its failure to bring real improvements allowed nationalists to gain ground, falsely arguing that ethnic outsiders were to blame for workers’ economic problems. Blair’s government was a real gift to these extremists.

In the US, meanwhile, the Democratic Party decided in 2016 to back America’s own version of Blairism; Hillary Clinton’s campaign of personality over policy. It consciously ignored arguments that democratic socialist Bernie Sanders could easily beat Donald Trump. And in doing so, it essentially gifted victory to Trump and the ethnic extremists who follow him.

How to really stop extremism

The fact that Jeremy Corbyn has not immediately overcome the obstacles created by New Labour does not mean that Labour should suddenly go running back to Blairism. It means that Labour has not yet overcome its toxic legacy; and that Labour right-wingers throwing their toys out of the pram have damaged the party’s image.

But Corbyn stands for something. He stands for a principled alternative to Blairism. For democratic public ownership and an end to privatisation. For a peaceful foreign policy. And for creating jobs that tackle climate change.

David Miliband and others like him, however, have failed for way too long to see that their ideology is the real gift to extremists. And that is an absolute tragedy for all of us.

– The fightback starts with us. To change the current political and economic system, we also need a media revolution. Please read and support the work of independent news outlets which seek to hold the powerful to account while informing and inspiring the struggle for an alternative. If you believe in our mission here at The Canary, please consider supporting us.