With one simple gesture, women sum up how they're going to destroy Daesh [VIDEO] - Canary 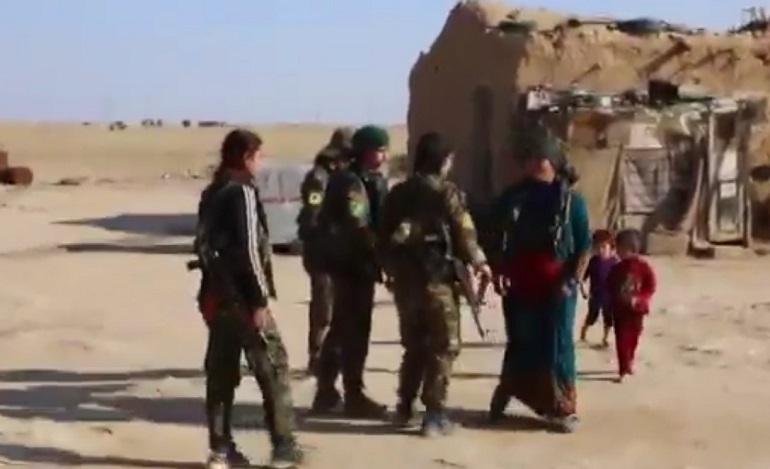 Female fighters in northern Syria are currently advancing on the self-proclaimed Daesh (Isis/Isil) capital of Raqqa. The multi-ethnic but Kurdish-led Women’s Protection Units (YPJ) form part of the Syrian Democratic Forces (SDF). Their goal, however, isn’t just to defeat Daesh and the oppressive ideology it represents on the battlefield. It’s also to create a radically feminist alternative at the same time.

And as a sign of the alternative system the YPJ believes to be the antidote to chauvinist oppression, fighters marked International Women’s Day on 8 March by handing out roses to women in liberated villages around Raqqa.

The meaning of the rose

But this gesture wasn’t just a propaganda stunt. The rose has real meaning for the YPJ. As Kurdish activist Dilar Dirik explains, the group has developed “a woman-centred philosophy of self-defence” called the ‘Rose Theory’ – which is fundamentally opposed to “colonialism, racism, nation-statism, capitalism, and patriarchy”. Dirik says:

Every living organism, a rose, a bee, has its mechanisms of self-defence in order to protect and express its existence – with thorns, stings, teeth, claws, etc. not to dominate, exploit or unnecessarily destroy another creature but to preserve itself and meet its vital needs.

To preserve women’s lives and meet vital needs, she insists that:

legitimate self-defence must be based on social justice and communal ethics with particular respect to women’s autonomy… In the eyes of Kurdish women fighters, ISIS cannot be defeated by weapons only but by a social revolution… In Rojava, alongside the YPJ, even grandmothers learn how to handle AK47s and rotate among themselves the responsibility to protect their communities within the Self-Defence Forces (HPC), while thousands of women’s centres, cooperatives, communes, and academies aim to dismantle male domination.

And she sums up:

in a world system of intersecting forms of violence, we have to fight back.

The front line of the ideological battle

ISIS has gathered the captive women in Raqqa as sex slaves. Their approach to women is clear, they want them to sit at home and have children and look after them. What we are saying is that women have their own will and are autonomous beings… ISIS sees women as property while the capitalist system views us as objects. Both perspectives think it is legitimate to use, abuse and persecute women… this foremost is an ideological war. As Kurds, Arabs, Syriacs, Turkmen and others… Our slogan is ‘Women, Life, Freedom’.

The YPJ General Command, meanwhile, marked International Women’s Day 2017 by stressing that it was:

celebrating 8th of March with the goal of liberating Raqqan women and children from the oppression of Daesh.

Every woman should wage an ideological struggle against all kinds of sovereignty and domination, especially against Daesh, and should have a basic duty of growing women’s defence.

In short, the fight against Daesh is not only physical. It’s ideological, too. And women in northern Syria are on the front line of both of those battles.

– Read more Canary articles on Syria and Rojava. See more international reporting from us at The Canary Global. And learn more about Rojava (the progressive revolution in northern Syria that the YPJ is defending) in the featured book.