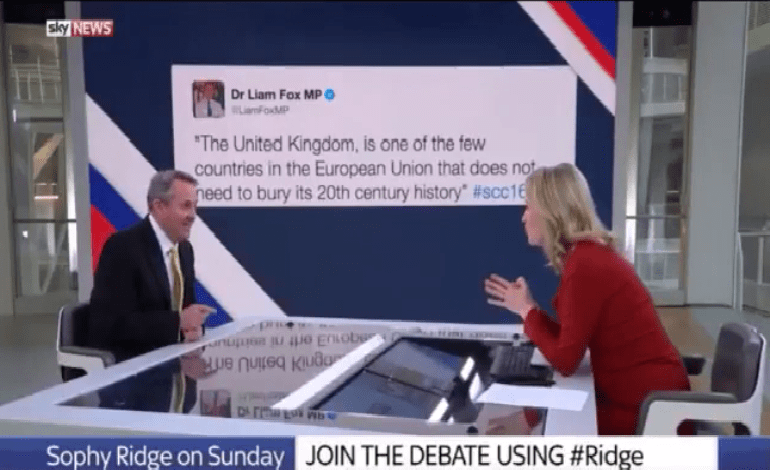 Conservative Cabinet Minister Liam Fox can’t have noticed the screen right behind him on the Sophy Ridge On Sunday show on 12 March.

The Secretary for International Trade outright denied sending out an embarrassing tweet on Britain’s colonial history. He should’ve glanced behind him:

Unaware of the image behind him, he continued:

It was taken from a speech I gave about a year and a half ago and it was tweeted out, I think, by The Guardian.

Right. As well as on the screen, the tweet remains on his page:

"The United Kingdom, is one of the few countries in the European Union that does not need to bury its 20th century history" #scc16

And the embarrassment goes further, given the nature of the tweet. When Fox first made the comment, The Canary offered him a crash course in Britain’s colonial history.

But it appears Britain is already well on its way in burying the past. In 2012, an official review concluded that thousands of documents showing the horrific crimes committed in the dying days of the British empire had either been “systematically destroyed” or hidden away for 50 years in a secret archive.

The treatment of people from India is one example. Under the British empire, up to 29 million Indian people died of starvation as wheat was sent over to Britain in the midst of famine. In 1943, Winston Churchill diverted medical aid and food away from starving citizens in British-controlled Bengal, sentencing up to four million Bengalis to death in the process.

Back to school for Fox

The crimes of the British empire were extensive. And social media users had a few other lessons for the Cabinet Minister:

[email protected] 'The United Kingdom is one of the few countries in the European Union that does not need to bury its 20th century history #scc16 pic.twitter.com/g2ilNjP09Q

There was something else striking about the Sky News gaffe. Host Sophy Ridge did not even correct Fox’s bald-faced lie. And what makes this worse is the worrying impact comments like Fox’s can have, combined with a blinkered education system. A 2016 YouGov poll revealed that 44% of Brits are still proud of the country’s history of colonialism, while only 21% regret it.

There are innovations, for example, that Britons should be proud of. But colonialism isn’t one of them. We must strive to educate people on the crimes of the past. Otherwise, they could be repeated.