If the Brexit Secretary can say that to Andrew Marr, no wonder we’re in this mess [VIDEO] - Canary 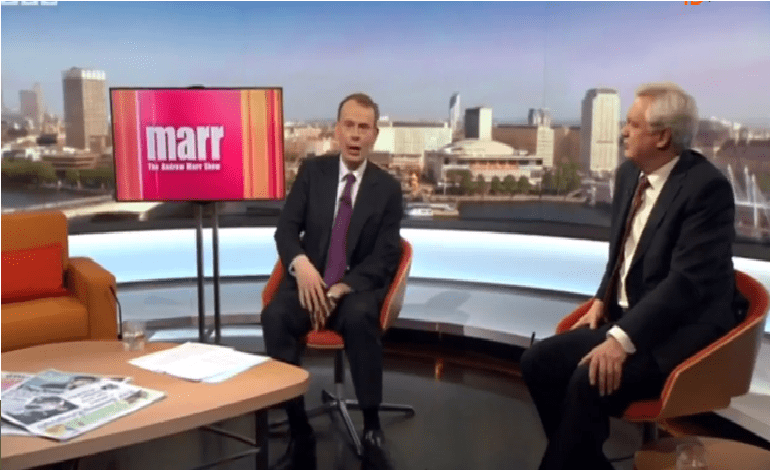 Apparently on the BBC, the Brexit Secretary can get away with pretending to have no knowledge of allegations that could lose his party its parliamentary majority. With such uncritical broadcasting, no wonder we’re in this mess.

Andrew Marr failed to challenge David Davis when he claimed to “know nothing about” alleged Conservative electoral fraud. Even though the scandal has been growing for over a year now and Davis is a cabinet minister. And there are 29 seats currently under police investigation.

Last week, two Tory whistleblowers came forward in the electoral fraud scandal. Louise and Gregg Kinsell were Conservative campaigners in the 2015 general election. They say the party is “lying” and is now involved in a “cover up” over allegations that law-breaking helped the Conservatives win power.

As The Canary previously reported, dozens of Tory MPs face accusations that they illegally overspent in the 2015 general election campaign. One part of the ongoing investigation is the failure to declare costs associated with the Conservative campaign ‘battle buses’. If the allegations are true, the MPs and their agents could face a year in jail and/or an unlimited fine. In addition, there could be a three-year ban on their holding elected office. This could potentially trigger by-elections across the country and lose the Conservatives their majority in parliament.

There are two types of election spending limits: national and local. If the buses classify as a national expense, then they would not break the national limit. Last year, then Prime Minister David Cameron said:

Lots of political parties have these bus tours – you know, buses that go round different constituencies and that is a national expense.

If people are saying, and the MPs concerned in these areas are saying it was part of a greater expense nationally for the Conservatives, that is a lie and an obvious falsehood. In that case I feel especially motivated to go to the police and go to the Electoral Commission.

Spending limits are crucial to ensure a level playing field in an election. Otherwise, parties like the Conservatives with huge financial backing can steamroll smaller parties.

The couple says there is now a “code of silence” among party activists about what happened. Still, relevant accounts go beyond the Kinsells. For example, a book entitled Why the Tories Won: The Inside Story of the 2015 Election confirms that the buses were used specifically to campaign in marginal seats:

So they are telling lies about what we did – and we duped people on the doors, it feels like cheating.

We went down and worked for individual candidates who then won their seat. If they hadn’t won their seat, the Conservatives may not have won the election.

And the wider allegations go beyond the battle buses. They include hotel expenditure, leaflets, letters signed by Cameron himself, along with food and transport for activists.

They’ve cheated and formed a government that affects the whole of the country: money, education, NHS, everything and they’ve cheated. How does that make them right to form a government? It doesn’t. It doesn’t and it wouldn’t matter what party they were that stands.

We are cooperating with the ongoing investigations.

But that hasn’t always been true. Despite two statutory notices, time extensions and a legal obligation, the party withheld information from the Electoral Commission relevant to its investigation in May 2016. The Conservatives only handed over the information after the watchdog applied for a High Court order.

On top of this, Conservative Party lawyers opposed a request from Kent Police for an extension to the time limit for their investigation. But Kent Police were eventually granted the 12 month extension.

If the Conservatives have nothing to hide, why would they obstruct the investigation? The Tory whistleblowers are adamant: the battle buses should be declared as a local expense. The police investigations are approaching their deadline in around two months. They could result in a number of by-elections, threatening the Conservatives’ majority in parliament.