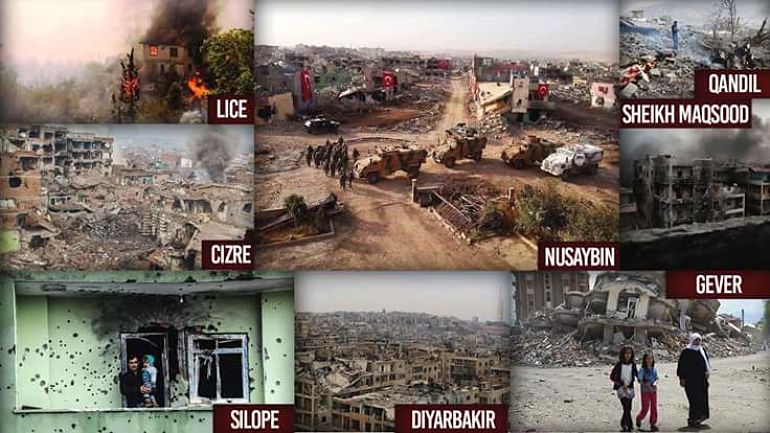 These featured images above are not from World War 2. They show Kurdish-populated cities in Turkey, destroyed by NATO’s second biggest army. A military that Britain continues to arm. And now, a report from the Office of the United Nations High Commissioner for Human Rights has condemned the Turkish state for its devastating assault on hundreds of thousands of Kurds.

The report begins by detailing a long list of crimes. Over an 18 month period, until December 2016, the conflict killed an estimated 1,200 local residents in Kurdish communities:

However, the UN report admits this figure is based on limited information, due to restricted access to affected places (see section 7, p3). Hence, the figures are just a sample.

The report graphically describes the destruction of Kurdish cities and towns (section 33, p10):

The most intensive period of destruction started… when the authorities reportedly… brought in machinery to raze entire city quarters to the ground, including lightly damaged buildings and cultural heritage. The centres of towns and cities across South-East Turkey have been described as empty moonscapes and vast parking lots.

Heavy weapons, air-dropped munitions and heavy machinery were all used to destroy these cities.

Displaced people whose property state forces destroyed, meanwhile, have to sign a document saying that it was ‘terrorists’ who were responsible for the destruction, or they receive no financial compensation (section 39, p12).

The report also examines conditions since the start of the post-coup purge in 2016. For example, the removal from office of democratically elected officials (section 81, p24):

Other significant concerns include the use of counter-terrorism legislation to remove from office democratically elected officials of Kurdish origin; the severe curtailment and harassment of independent journalists; the closure of independent and Kurdish language media and citizens’ associations; and the massive dismissals of civil servants, including teachers, on unclear grounds and without due process.

The report makes a number of recommendations, such as how the open-ended, 24-hour curfews should end immediately (section 86, p24). And how the Turkish authorities should (section 94, p25):

Carry out an independent review of the effects and extent of the counter-terrorism legislation… which result in severe limitations upon the work of journalists and academics; the closure of Kurdish language media; citizens’ associations and universities.

The big question now is, will NATO and the EU also condemn Turkey for the repression of its Kurdish communities? Or will they simply continue to turn a blind eye and allow this repression to escalate even further?