One academic is so sick of BBC bias, he's taking legal action - Canary 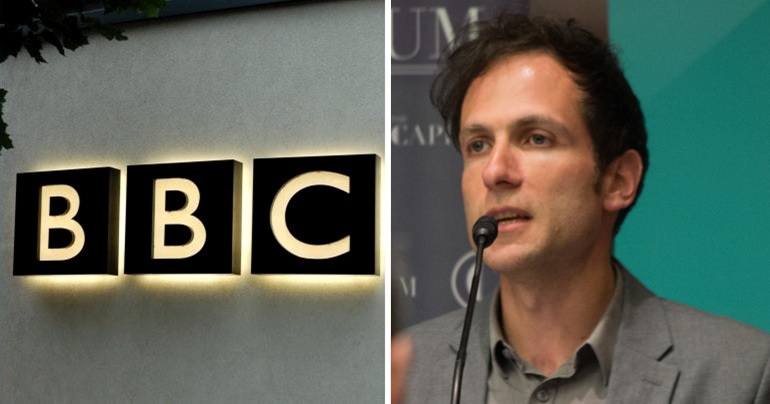 One academic thinks the BBC‘s treatment of Labour leader Jeremy Corbyn has been so vile that it’s time to act. So he’s launching a legal challenge.

The BBC‘s anti-left bias has gone into overdrive in recent years. And despite its director general trying to paint criticisms as “conspiracy theories”, people across the UK simply can’t ignore the evidence of appalling BBC bias during the 2019 election.

Justin Schlosberg is a Journalism and Media lecturer at Birkbeck College, University of London. He’s also a co-author of Bad News for Labour. Antisemitism, the Party and Public Belief. And he’s been scathing about the “unprecedented and relentless war on truth” that helped to deliver the 2019 election to Boris Johnson. Now, he’s planning:

A formal legal challenge to Ofcom’s decision not to investigate complaints about the BBC’s Panorama programme ‘Is Labour antisemitic?’

As The Canary reported previously, this Panorama episode faced intense criticism. The BBC admitted receiving over 1,500 complaints about the programme over a two-week period, which many saw as a ‘hatchet job‘ against Corbyn’s Labour.

Corbyn is a peace–prize winner who has fought against antisemitism all his life. And under his leadership, Labour took strong action to stamp out the small amount of racism in the party. But while true antisemitism always requires condemnation, Corbyn and his supporters faced constant right-wing smears which weaponised and amplified antisemitism allegations to undermine his public popularity. This is a tactic that the pro-Israel right has been using heavily in recent years to attack Corbyn and other left-wing allies of the occupied Palestinian people. Schlosberg, along with other prominent Jewish left-wingers, has vocally opposed this propaganda campaign.

His crowdfunder is approaching 30% of its funding target.

“Gross breaches” from the BBC

This was the third Panorama edition since 2015 that was focused on, and wholly critical of Jeremy Corbyn’s leadership of the party. It contained gross breaches of the BBC’s legal commitment to due impartiality and due accuracy rules

But he says complainants faced “obfuscation and irrational argument” from the BBC, and many turned to regulator Ofcom as a result. Ofcom then “took an extraordinary 12 weeks to reach a decision simply not to investigate“. This, he stresses, “can and must be legally challenged” because “it represents a wholesale failure of accountability”.

If the challenge succeeds, meanwhile, “all donations will be refunded”.

The future of our democracy hinges on our public service media offering fair and accurate coverage of political controversies, and a regulator that properly holds them to account.

Schlosberg isn’t the only one seeking to hold the BBC to account, though. One petition – Stop the anti-Corbyn bias on the BBC – currently has over 22,000 signatures. Its founder John Han told The Canary:

The BBC handled the election in an appalling way. People were so outraged by their performance that in one week alone over 7,000 people signed our petition. If many did not think the bias of the BBC was an important issue before the election, they did by the time the election was over.

Among unfavourable analysis of the BBC‘s election coverage was a YouGov poll showing that only 44% of Britons now trust BBC News reporters to tell the truth. This fell by 7% between October and December 2019.

Dr Richard House, meanwhile, recently started a petition to Demand a full independent inquiry into the BBC’s coverage of the 2019 General Election. House told The Canary that:

the amount of sheer anger, if not outrage, that’s around about the BBC’s dereliction of its democratic duty to provide political balance is just enormous. It’s clear that many thousands of citizens feel that our democracy has effectively been captured and stolen by the Establishment and its supine media lackeys – which includes the BBC. … We’re just not going to countenance a repeat of this democratic outrage ever again at future general elections.

Han and House are currently planning “shared action” while reaching out to other groups opposing BBC bias.

If we want democracy, we need to act

Through legal action and petitions, people are trying to end the BBC‘s despicable bias. And if we want a democratic future, we must support them. Because true impartiality at the BBC is vital.