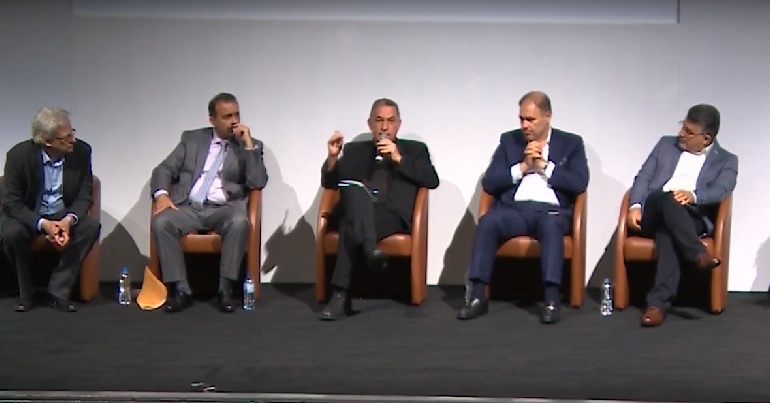 “We shouldn’t surrender to those labels”

If Corbyn becomes UK prime minister, Levy said, this could “be a major change”. But he also pointed out that:

Corbyn is a victim of a systematic campaign.

[Corbyn] is portrayed in Israel as Hitler’s deputy – not much less than this, antisemite, and you name it.

We shouldn’t surrender to those labels – to those accusations – because they are there in order to blackmail, in order to fight anyone who dares to criticise Israel.

The veteran Israeli reporter was speaking at the Palestine Expo (6-7 July) in London.

Antisemitism exists throughout society. And we should all firmly oppose it whenever it rears its disgusting head. But as Levy highlighted, accusations of antisemitism have in recent years become a favourite tactic among Israel apologists and propagandists to “blackmail.. anyone who dares to criticise Israel”.

Many prominent Jewish figures, meanwhile, support Levy’s view. Renowned Jewish academic Noam Chomsky, for example, explained this same concept at the UN in 2014. Citing an article that Israel’s then ambassador to the UN wrote in 1973, Chomsky said:

He advised the American Jewish community that they had two tasks to perform. One task was to show that… criticisms of the policy of the state of Israel were antisemitism… Second task: if the criticism was made by Jews, their task was to show that it’s neurotic self-hatred – needs psychiatric treatment… So we have to be treated for our psychiatric disorders and non-Jews have to be condemned for antisemitism if they’re critical of the state of Israel.

The same Israeli politician also argued that “anti-Zionism is merely the new anti-Semitism”.

Jewish activists: “Anti-Zionism is not antisemitism”

As left-wing Jewish group Jewdas wrote in its guide on How to criticise Israel without being anti-semitic:

It also explained that:

The basic definition of Zionism is the belief that there should be a Jewish state in Israel. Many Jews are not Zionists, and political Zionism is a comparatively new movement within Jewish thought (150~ years old). To equate Judaism with Zionism is misleading – Jews do not have a responsibility nor a natural tendency to be Zionists.

Activist organisation Jewish Voice for Peace, meanwhile, has stressed quite simply that “anti-Zionism is not antisemitism”.

The smear campaign is a “disgrace”

The way charges of anti-Semitism are being used in Britain to undermine the Corbyn-led Labour Party is not only a disgrace, but also – to put it simply – an insult to the memory of the victims of the Holocaust.

So as Corbyn’s opponents keep using this dirty tactic, we should stand firm. Because he is the most progressive leader of a mainstream political party in many decades. And by folding under attacks from the right, we would be letting down everyone in the UK and around the world who desperately needs a politician like Corbyn; a man who has worked – and will continue to work – tirelessly to oppose all forms of injustice and oppression wherever they exist. That’s why, as Levy stressed, we must not surrender.