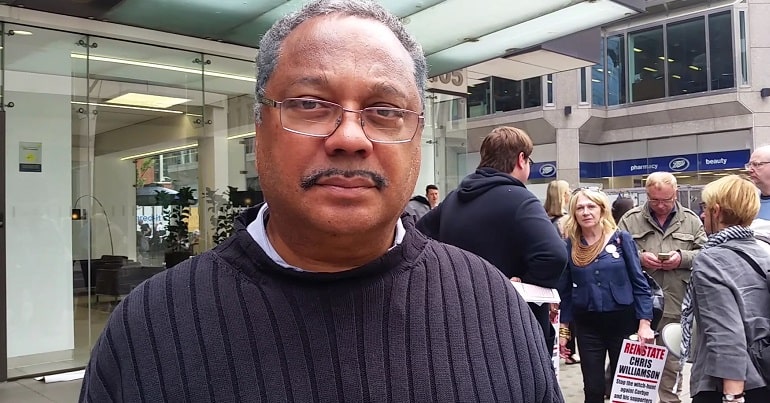 On 9 July, demonstrators outside Labour HQ said the party’s leadership needs to “get a backbone” and come out in support of its membership.

People on the scene told The Canary that up to 200 people were there to ask the National Executive Committee (NEC) to readmit Chris Williamson into the party. The Campaign for Chris Williamson reported that the NEC is expected to make its decision on 9 July.

“Stop apologising” and “don’t buy into their lies”

While Labour is not immune from antisemitism, it is taking more action than other parties (including the ruling Conservatives) to avoid and prevent discrimination of all types. The establishment media, meanwhile, has faced serious accusations of “misleading”, ‘distorted’ and “inaccurate” coverage of alleged antisemitism in the Labour Party. According to numerous reports, antisemitism exists across society, but most antisemitic discrimination comes from far-right groups. Accusations of antisemitism in Labour reportedly relate to 0.1% of the party’s 540,000-strong membership.

Among those present outside Labour HQ was Tony Greenstein, a Jewish anti-racist campaigner. Greenstein told The Canary:

I’m here to protest against the re-suspension of Chris Williamson. Singling out an anti-racist MP… I think is outrageous.

When The Canary asked what message Greenstein had for the leadership, he responded:

I’d say get yourself a backbone, stand up, stop apologising, don’t accept this antisemitism nonsense. When they talk about antisemitism what they mean is criticism of Israel and apartheid. You shouldn’t buy into their lies.

Marc Wadsworth to Labour leadership: “get a backbone”

This message was later echoed by Marc Wadsworth, another person expelled from the Labour Party. Wadsworth told The Canary:

If I could speak to the leadership of the Labour Party I would tell them to get a backbone. That they should stop appeasing, apologising, and capitulating to bullies. Because that’s what the gang in the Parliamentary Labour Party [PLP] are.

“They will never accept a Corbyn-led Labour Party”

Wadsworth continued by saying that those who are anti-Corbyn in the PLP:

will never accept a Jeremy Corbyn-led Labour Party, despite Jeremy being twice elected by the membership.The last time by 60%, which is the largest percentage for any leader in the Western world. And it’s appalling that they will not accept that democratic vote. And I say to them: if they don’t believe in Labour, they should leave. And if they won’t leave, they should be de-selected.

Anti-racist campaigners in solidarity with each other

Wadsworth, a journalist and long-time anti-racist campaigner, told The Canary that:

Chris Williamson has been an amazing ally of mine… since before I was expelled, wrongly, by the Labour Party. He actually came to my hearing and gave evidence in my favour. Along with other Labour MPs – Keith Vaz and Clive Lewis.

How the Labour leadership deals with the constant smears, suspensions, and expulsions of anti-racist members of its party may well determine the future of Labour – and therefore British politics – for years to come.