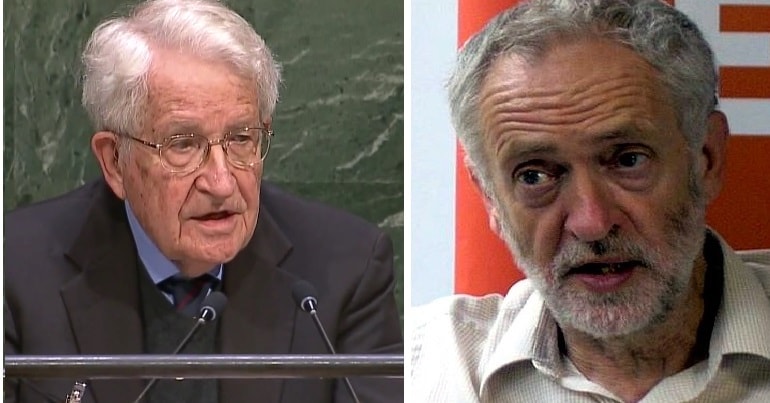 Addressing the United Nations in 2014, Chomsky revealed how some Israeli politicians have explicitly sought to smear critics of Israel as antisemitic.

Presently, Corbyn is under fire from the press, the right of his party, and the conservative Board of Deputies of British Jews. The Labour leader has stood firm against pressure to adopt the International Holocaust Remembrance Alliance’s (IHRA) examples of antisemitism in full.

Strengthening Corbyn’s position, 36 Jewish groups from around the world said on 17 July that the IHRA definition can be perceived to “intentionally equate legitimate criticisms of Israel… with antisemitism”.

Back in 2014 at the UN, meanwhile, Chomsky showed where the smear campaign began:

Citing an article that Israel’s then ambassador to the UN wrote in 1973, Chomsky said:

He advised the American Jewish community that they had two tasks to perform. One task was to show that… criticisms of the policy of the state of Israel were antisemitism… Second task: if the criticism was made by Jews, their task was to show that it’s neurotic self-hatred – needs psychiatric treatment. And he gave two examples of the… latter category. One was I.F. Stone, the other was me. So we have to be treated for our psychiatric disorders and non-Jews have to be condemned for antisemitism if they’re critical of the state of Israel.

These are precisely the allegations that face critics of Israel today, as Chomsky points out.

Corbyn, a stalwart of Palestinian rights, is on the verge of becoming prime minister. For those in Britain who support the actions of the Israeli government, he’s no doubt enemy number one.

– Campaign with Free Speech on Israel.