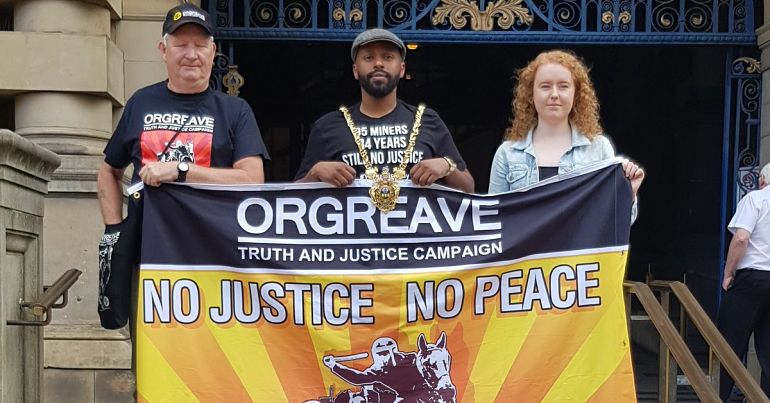 On 1 August, which was Yorkshire Day, the Green lord mayor of Sheffield, Magid Magid, wrote an open letter to home secretary Sajid Javid. It was to demand an inquiry into the ‘Battle of Orgreave‘ in the most ‘Yorkshire way he knew.’ Magid, a proud immigrant and charismatic character, said in his open letter to Javid “our Orgreave miners and their families have been waiting too long.”

Magid posted a copy of his handwritten letter on Twitter alongside a photograph of him in his signature squat pose:

On this #YorkshireDay I've written to @SajidJavid in the most Yorkshire way I know, to demand an inquiry into #OrgreaveJustice

For more info check out @OrgreaveJustice

Magid used Yorkshire dialect in the letter and greeted the home secretary with:

Our Orgreave miners and their families have been waiting too long. It’s time they were given the justice they are owed for all their suffering, all their pain and all their hurt!

Now I know your government is famous for ruining lives, but if you have a heart, you’ll do the right thing for once and give the miners and their families a proper, decent and fair inquiry.

He also stood behind the Orgreave Truth and Justice Campaign (OTJC) banner stating the North “won’t be silenced”:

Please do the same and let him know that #TheNorthRemembers and that we won't be silenced. pic.twitter.com/8jRQ1qxm04

In October 2016, former home secretary Amber Rudd decided against an inquiry into the events at Orgreave:

In a statement at the time, Rudd said:

Over 30 years later, policing is very different and one of my key concerns as Home Secretary is to ensure there is a policing system which works effectively and fairly now. The policing landscape has changed fundamentally since 1984 – at the political, legislative and operational levels. The same is true also for the wider criminal justice system

‘The Battle of Orgreave’

The ‘Battle of Orgreave’ is the name given to the clash between police and striking miners outside a coking plant just 8 miles outside Sheffield. The incident took place on 18 June 1984 during the UK-wide miners’ strike. This particular picket was organised because of the suspected closure of 70 pits by the National Coal Board (NCB). It was also to block the supply chain of coke from Orgreave to Scunthorpe.

As the picket took place, the police had surrounded the field and left only one escape: over a narrow bridge into Orgreave village. The police officer in charge of the operation, Assistant Chief Constable Clement, ordered officers mounted on horseback to charge the field. Police officers with dogs were strategically placed and “paramilitary” style officers ran in behind the mounted police officers. A high number of miners sustained injuries. The mounted police officers held long truncheons and ignored orders to hit “bodies, not heads”. As well as police brutality, 95 miners were arrested; 55 of them were charged with “riot” and 40 with “unlawful assembly”. The charges were dropped after trials took place in May 1985. The Orgreave Truth and Justice Campaign believes that senior police officers colluded to cover up the events that happened at Orgreave.

Why is an inquiry so important?

In 2015, police officers who had been present at Orgreave brought new evidence to light. The Independent Police Complaints Commission said at the time that there was:

evidence of excessive violence by police officers, a false narrative from police exaggerating violence by miners, perjury by officers giving evidence to prosecute the arrested men, and an apparent coverup of that perjury by senior officers

Orgreave veteran Ken Capstick described the ‘battle’ as a “one-sided contest” between police and strikers. It has also been compared with the Hillsborough disaster, where 96 football spectators were unlawfully killed in 1989. Both incidents fell within the jurisdiction of South Yorkshire Police. The Hillsborough inquiry eventually took place and passed judgement on 26 April 2016, 27 years after the tragedy.

The victims and the families affected by the events at Orgreave deserve truth and justice. Let’s hope that Magid’s attempt to proposition the home secretary will result in an inquiry. 34 years after the event took place, he believes they deserve justice. And many would not disagree with him.

– Support The Orgreave Truth and Justice campaigns, if you agree with their cause.