Sky’s Kay Burley was too late intervening. The Mail columnist’s smear against Corbyn had crumbled. - Canary 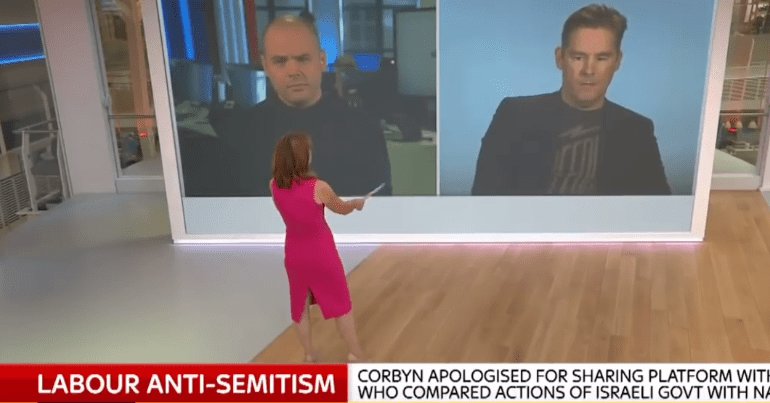 Hodges was apparently suggesting that Corbyn is antisemitic for hosting a parliamentary event on Gaza in 2010:

The event… was framed as ‘from Auschwitz to Gaza’. It was specifically framed in a way to align the actions of the Israeli government… with the actions of the Nazis. And that is in clear breach of the code. Jeremy Corbyn organised the event. He hosted the event. My understanding is he was warned about the nature of the group before he even attended the event… I think this is the crucial thing of all: Jeremy Corbyn agreed and helped facilitate the event to take place on Holocaust Memorial Day, which was obviously deliberately designed to cause maximum offence to the Jewish community…

But Butler pointed out that Corbyn was actually hosting a Jewish Holocaust survivor, who was addressing Jewish people:

This was a meeting that was addressed by a Jewish Holocaust survivor addressing a room predominantly of Jewish people, who were naming and discussing their own history in relation to Israel’s actions in Gaza. This was immediately after the Gaza war in which the Israeli government had used white phosphorus munitions… It is far from my right and I think it’s certainly far from your right to suggest that Jewish people themselves are not able to talk about their history in this way… You’ve just suggested that what was said there was antisemitic.

So when Hodges attacked the “nature of the group” and said the event caused “offence” to the Jewish community, he was actually attacking Jewish people themselves.

To which Butler interjected:

What is your suggestion about what Jeremy Corbyn did or didn’t say?

With Hodges fumbling, Burley was forced to intervene:

Hold on, James… you want him to make the point… let him do it and we’ll come back to you.

The exchange quoted above starts at 4:24:

The latest form of the anti-Corbyn smear campaign comes with a twisted irony. The establishment is somehow suggesting that Corbyn is antisemitic for hosting the views of Jewish people at the Palace of Westminster.

There was a similar incident in April. Labour Party leader Corbyn had attended Jewish group Jewdas’s Seder (a traditional Passover feast). The Conservatives, the Labour right and the mainstream press launched an onslaught against the Labour leader for attending the progressive Jewish gathering. Again, mainstream commentators apparently considered those Jewish people the ‘wrong sort of Jews’.

On Sky, Butler exposed the equally ridiculous nature of the most recent attack line. The corporate media is insulting the intelligence of British people by painting Corbyn as antisemitic for facilitating Jewish political discussion at the seat of parliament.

The neoliberal establishment is facing an existential crisis in the Corbyn-led labour movement. The increasing desperation of the powers-that-be is a sight to behold.