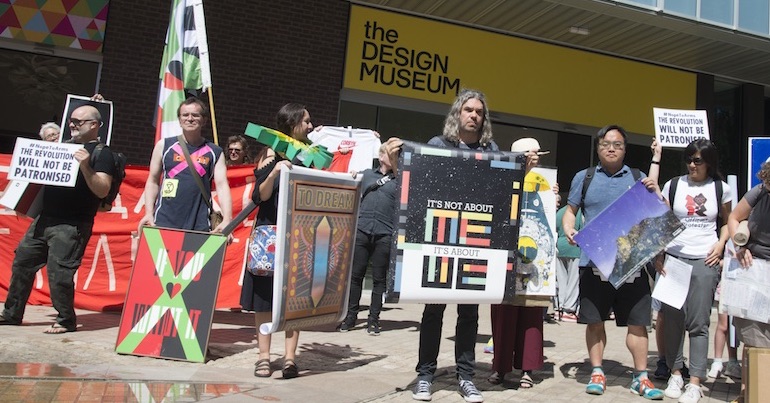 At 11am on 2 August, over 40 world-famous artists withdrew their work from the Design Museum in London. This move was a powerful and unprecedented act of resistance against the arms trade. The artists challenged the museum’s abysmal response after it hosted a private event for the world’s ninth largest arms company, Leonardo.

The Design Museum misunderstood the essence of this exhibition. It was about resistance, not acquiescence.

Over 40 artists, including the designer of the iconic Obama ‘HOPE’ poster – Shepard Fairey – and Grenfell justice campaigners, removed work. And the artists demanded that a powerful written statement should be put up in place of their art:

The artist has asked for their work to be removed because the museum recently hosted an arms trade event. The artist views this as a violation of their personal ethics and ethics that should be the norm for arts institutions. It is the artist’s hope that the museum will now establish a new policy stating that they will not take money from the arms, fossil fuel and tobacco industries or use art to legitimise those profiting from war, repression and destruction.

The artists’ work was part of the Hope to Nope exhibition, which runs until 12 August. But, as The Canary previously reported, the museum hosted a reception for Leonardo on 17 July. The company has armed human rights-abusing regimes around the world, including Saudi Arabia, Turkey and the Philippines. And when they found out about the conference, the artists signed a public letter on 25 July, demanding that the museum remove their work, and stating:

It is deeply hypocritical for the museum to display and celebrate the work of radical anti-corporate artists and activists, while quietly supporting and profiting from one of the most destructive and deadly industries in the world. Hope to Nope is making the museum appear progressive and cutting-edge, while its management and trustees are happy to take blood money from arms dealers.

We refuse to allow our art to be used in this way.

But the museum’s response pushed them to take further action. They formed the Nope to Arms Collective. Since they’re responsible for a third of the art in Hope to Nope, withdrawing their art is a significant action. 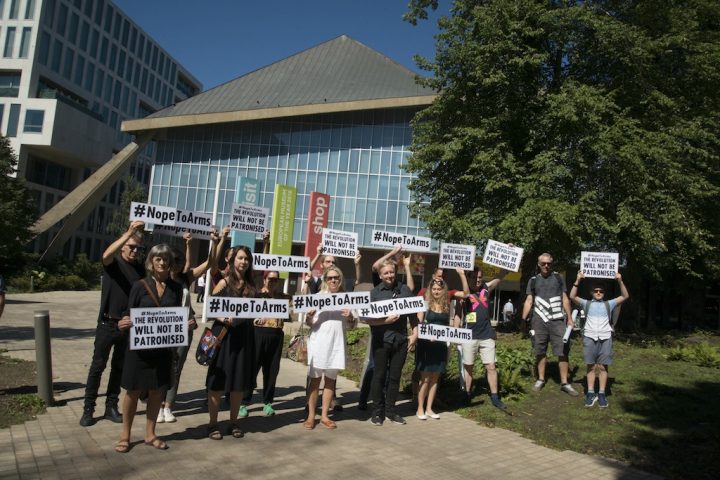 ‘The Revolution Will Not Be Patronised’

As Campaign Against Arms Trade (CAAT) reported, the Design Museum said it was “reviewing their due diligence policies”. But it would only commit:

not to have any arms, fossil fuels and tobacco corporate hires in the museum for the period of time during which we undertake our review.

The artists criticised this response. On 30 July they sent a second letter saying:

While we welcome this small step, it does not go nearly far enough.

As museum directors, you have the authority to decide immediately that these industries are not appropriate sources of funds for the museum, to make a public statement along those lines and to call an Extraordinary General Meeting of the trustees to agree such a policy now.

Peter Kennard, one of the artists, went further, in a response seen by The Canary:

I have read the public statement you have put out and am appalled at your attitude to the artists and collectives in Hope to Nope. You put on an exhibition of work by brilliant and committed artists, all people who are taking on the horrors and iniquities of our time and they get absolutely no mention in your statement. Instead, you harp on about activists, even ‘professional activists’ running the whole protest. This is all complete rubbish as you must know, not worthy of a Daily Mail leader.

Many carried signs declaring ‘The Revolution Will Not Be Patronised’ – and their action shows this is far more than just a slogan.

The artists have received widespread support for their action.

The @DesignMuseum put on an exhibition of radical protest art. Then they hosted an event for an arms company.

That's why over forty artists in the show have demanded that their artwork is taken down.

#hopetonope #nopetoarms get the arms industry out of the museums! pic.twitter.com/pX7W3ahs1X

The artists’ action is powerful and it sends a strong message out to profit-making corporations and arms traders that the tide is changing. Political art truly did get political. And long may that continue.

– Write to Theresa May and your MP. Ask them to cancel and stop approving arms sales.

– You can also support Campaign Against Arms Trade to help make that happen.

Featured image via Luke Forsythe or #lookforsight with author’s permission