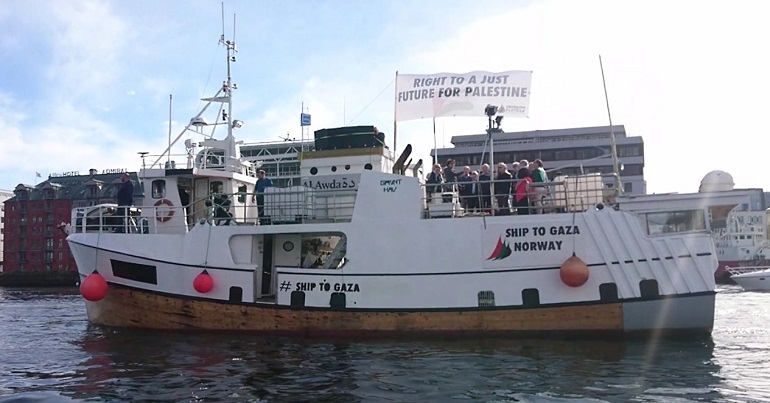 On 29 July 2018, the Israeli military raided a Gaza Freedom Flotilla in international waters and kidnapped its 22-member crew and passengers.

Up to the moment of publication, Britain’s Foreign Office had apparently remained silent on the matter – even though a British citizen was among those captured.

Al Awda (The Return) is a Norwegian-flagged ship, and Norway’s government has apparently been contacted to secure the release of the ship, its passengers and cargo.

According to a statement released by Right to a Just Future for Palestine (JfP) on 30 July:

Prior to all of our electronic communications being cut to and from our boat, at least four warships had appeared. Following some unlawful radio directives to our captain and our insistence that we had a right of innocent passage in international waters, armed, masked soldiers boarded ‘Al Awda’ without permission.

The statement then refers to Israel’s military as ‘IOF’ (Israeli Occupation Forces):

They assaulted several unarmed participants by hitting them and using tasers as some of our participants lawfully endeavoured to resist this attempted hijacking, drawing upon two days of non-violence training in Palermo. Other participants were also hit by soldiers in this anything but peaceful exercise by the IOF, for what may have been a range of ‘reasons’.

As most of the participants and crew from AlAwda (The Return) are being deported from their unlawful detention at Givon prison in Israel, we now have a clearer picture of just how much violence was used by… IOF in their attack on the first Freedom Flotilla ship on Sunday. Some participants were repeatedly tasered, including in the head. Others were punched or had their head beaten against a wall by IOF soldiers. Zip-cuffs were used in a manner which cut off circulation.

While the silence from the British political and media establishment has largely been deafening, people from around the world took to Twitter to condemn the action.

BREAKING….#AlAwda boat has been boarded and hijacked in international waters by Israeli pirates trying to enforce an illegal blockade on Gaza.

And some highlighted that British citizen Dr Swee Ang Chai was among those taken:

Dr Ang Swee Chai author of from Beirut to Jerusalem has been illegally detained by the Israeli authorities for taking part in the Freedom Flotilla taking medicines to Gaza. We demand her release with the other detainees. #freedomflotilla #gaza #palestine #medicalaidtopalestine pic.twitter.com/g5F84CIOFU

Passengers on the flotilla come from all over:

Filmmaker Jason Soon back in #Singapore; deported from #Israel. He was filming Dr Ang Swee Chai on a boat that was trying to break the blockade on Gaza. They were intercepted by the Israeli forces. Dr Ang has also been deported to the UK. pic.twitter.com/KPpivi8w63

#SOSFreedomFlotilla "Update (0800/30 July): Zohar is now out on bail from Israeli police custody. Please campaign for the release of all of the people who were aboard #AlAwda as well as all political prisoners from Israeli prisons." pic.twitter.com/hteU40SPqU

The Israeli navy has illegally detained 22 humanitarian volunteers, including a British citizen. My letter to the FCO demanding their freedom & freedom for Gaza: https://t.co/QyVzsZPLX8 #freedomflotilla

There is a total media blackout in the UK about the fact that Dr Swee Ang, a British citizen, has been tasered and hit by Israeli soldiers in international waters…

It tells us first and foremost that the British Establishment looks benignly on Israel’s breach of the UN Convention on the Law of the Sea. It also tells us that British citizens are expected to do the same. It tells us exactly how the British Establishment views the brave people who year after year risk their lives to bring the imprisoned Gazan people not only much-needed medical supplies but also humanity’s hope for their freedom.

Others also spoke out. A member of Veteran Intelligence Professionals for Sanity (VIPS), Elizabeth Murray, also tweeted to her own foreign secretary:

@StateDept @SecPompeo please demand that Israel Immediately release USS Liberty survivor Joe Meadors, who was dragged off the Al-Awda, on a peaceful mission to Gaza. An eyewitness to & survivor of Israel's 1967 attack on the Liberty, Joe knows the truth & is in grave danger. https://t.co/LLaZjThbAX

Joe Meadors was a sailor and survivor of the hours-long massacre by the Israeli Airforce and Navy on the USS Liberty Communications ship during the 1967 war.

The memorial website for the attack (in which 34 people were killed) says that, on 8 June 1967:

Fortunately, no one has been killed this time around.

As the majority of the hostages are currently being released (and deported), it is arguable that the upwards pressure from below has had an effect.

As int'l #FreedomFlotilla crew members from al-Awda are deported, the true horror of Israel's terrorism is revealed https://t.co/tYR0QMQJcY

One victim of the Israeli assault, meanwhile, is apparently planning to file charges:

Ship to Gaza Activist Charles Andreasson in Stockholms Airport on his way to a polis station to file a complaint after being kidnapped, tasered, punched and molested by the Israeli navy on international waters. His belongings, credit card and driving licens have been stolen. pic.twitter.com/MwB8u487zw

Another boat that makes up the Freedom Flotilla (‘Freedom’) is still making its way to Gaza.

It has not been smooth sailing

As The Canary previously reported, two of the ships that are part of the ‘Freedom Flotilla’ were refused docking in Paris and harassed by authorities there, as well as by German authorities. But this military assault by Israel, in apparent violation of the UN Convention on the Laws of the Sea [pdf, p57], is by orders of magnitude more severe; as is the deafening silence by the press and politicians within allied states that continue to provide Israel with limitless military and political support.

– See who the participants on the Freedom Flotilla are.

– Write to your national or local politicians to share your concerns and ask where they stand.