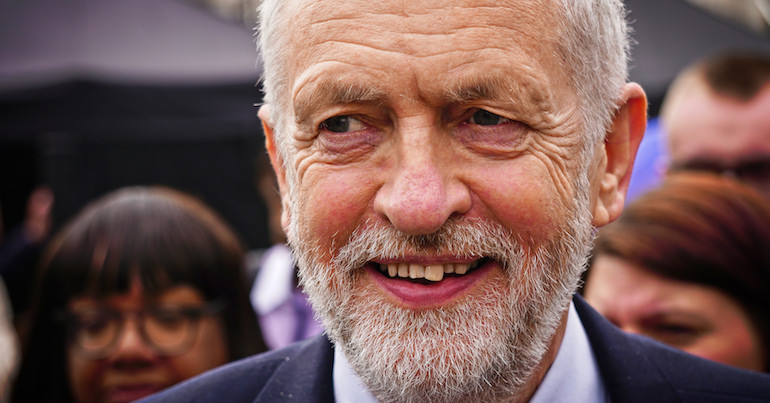 As The Canary reported, a call went out to show support for Jeremy Corbyn across social media on 2 August. It happened and it was huge – thousands shared #WeAreCorbyn images, comments and memes.

In fact, for several hours the hashtag was trending globally. Although the mainstream media took no notice, and press coverage is filled with anti-Corbyn attacks yet again, the show of support for the Labour leader was extraordinary.

From Labour voters to members of the shadow cabinet, thousands joined in the Twitter storm.

Right-wing papers such as the Mail, the Express and the Sun appear intent on portraying a split between shadow chancellor John McDonnell and Corbyn. But this seems far from the truth:

#WeAreCorbyn I am proud to stand in absolute solidarity with my comrade and friend, Jeremy Corbyn, who has stood with me and so many others for decades in campaigns for peace, justice and against all forms of oppression and discrimination.

Jeremy Corbyn stood behind the miners in 1984/85, when others turned their backs on the historic struggle which saw many workers receive criminal records and other striking miners killed.

For that alone you have my full support!#WeAreCorbyn

And other Labour MPs offered support too:

A leader with integrity that fights for justice, equality and against discrimination. I'm honoured to call him my friend and our Labour leader. We are for the many not the few. #WeAreCorbyn

Just got home and it seems my boss is trending #WeareCorbyn pic.twitter.com/7jsrqSdcUJ

Tonight's Wakefield Labour Party meeting that I attended took a moment out to participate in the #WeAreCorbyn Twitter storm. Unanimous support for Jeremy Corbyn and the full #JC9 slate

So the anti Corbyn Progress Portland bots are angry this morning because they were swamped and #WeAreCorbyn trended at No1 GLOBALLY. We Are Many Ye are Few.

The response was phenomenal. It was trending at No. 1 on Twitter in the UK and – for several hours – globally:

I don’t think I’ve ever seen a response to a hashtag like #WeAreCorbyn before.

#WeAreCorbyn is trending on Twitter. Was number one in the UK an hour ago and is now number one worldwide. Make yourself feel better, have a look at why so many people are tweeting #WeAreCorbyn

Not only has #WeAreCorbyn been #1 in UK trending all night, it's so viral it reached #3 Worldwide.

We want a better, fairer Britain with opportunities for all, not ruinous hard-right dogma, discredited neoliberal dogma & deliberate establishment barriers to social mobility.

In the face of continued media attacks and criticism, the hashtag’s ranking on Twitter shows how strong grassroots Labour support really is.

For the many. Not the few.

The tweets showed a range of support for Labour policy under Corbyn. People expressed support for its stance on the rights of sick and disabled people, the NHS, education, and ending the misery caused by austerity. Voters came out in force to share their views.

Meanwhile, many shared this now iconic image of Corbyn:

Jeremy Corbyn didn't oppose apartheid in South Africa because he was anti-Afrikaners.

He doesn't oppose apartheid in Israel because he's anti-Semitic.

And others gave their own reasons for believing in Corbyn:

#WeAreCorbyn – this is the kind of Prime Minister I want. pic.twitter.com/aFqOpGfp51

The media seem to want to ignore the fact that many people joined the Labour Party only because Corbyn became leader. So, while some critics have argued that this support is simply a ‘cult of personality‘ trend, they’ve ignored something vital.

It’s hard, if not impossible, to imagine an “I support Theresa May” hashtag trending on Twitter. While people march in their thousands to support the NHS, no one marches to defend Tory cuts or austerity. But no matter how hard the right-wing press come after Corbyn, his grassroots support grows even stronger.