The tabloids launched an attack on the SNP's baby boxes. The Royal College of Midwives disagrees. - Canary 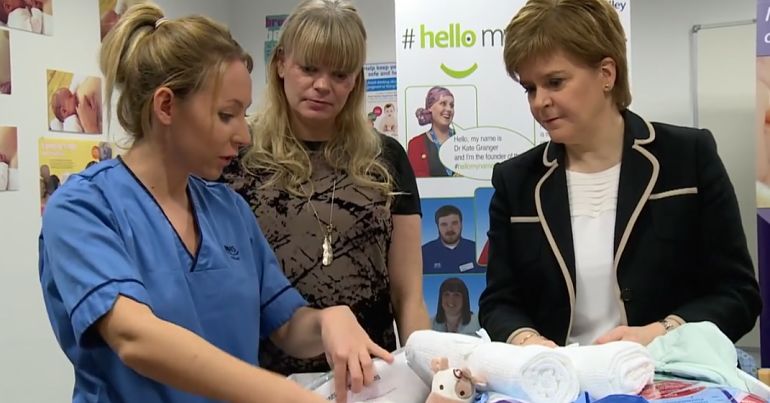 On 2 August, the Royal College of Midwives (RCM) suggested all new mums in the UK should be given a baby box. As the BBC reported, the RCM claims the box could reduce the risks attached to co-sleeping, and particularly benefit babies from deprived backgrounds. The Scottish government has already adopted this policy. The box includes essentials for new babies born in Scotland.

Whitford also hit back on the BBC’s Twitter feed. She accused the BBC of ‘joining the Tories’ in condemning the policy in Scotland:

The SNP @scotgov already do – but you joined the Tories in attacking them for it! What’s changed?

The SNP administration piloted the project in January 2017 and rolled it out across Scotland the following August. The Scottish Sun attacked the scheme, reporting claims from a “cot death expert” that the baby box was unsafe for babies to sleep in. He also said the baby box could be a fire risk.

Dr Peter Blair was quoted in the Scottish Sun saying:

Blair went on to claim there is “little evidence” to suggest that the baby boxes are safe to be used as cribs.

On 3 May, the BBC covered the safety concerns over the baby box in its Scottish newspaper review. It was this coverage that prompted Whitford’s tweet. The BBC repeated the claims that the baby box was a fire risk and unsafe.

For that reason, SNP voters took to Twitter to show their frustration with the BBC and highlight the contradictions:

Remember, in England baby boxes are a great way to reduce infant deaths, but north of the border they are flammable deathtraps that are a complete waste of taxpayers money.

Anything progressive in Scotland is either ignored, downplayed or attacked by the 'lovely' aunty beeb!

Some people made jibes about flamethrowers due to a video released by the Scottish Sun. The video showed a baby box being set on fire to ‘prove’ the point.

Don't English parents realize baby boxes can be deadly when they come into contact with ordinary domestic flamethrowers?

The Scottish government adopted the policy owing to the successful Finnish tradition that dates back to the 1930s. The Finnish government gives every new mum, regardless of their background, a box with baby essentials which provides a safe place for the baby to sleep. It is thought to help deliver Finland’s low infant mortality rate, which is one of the lowest in the world. However, the Lullaby Trust has criticised the move because no British safety standards have been “drawn up for the boxes.”

A baby box is a positive gift which signals that every baby is important and welcomed. Providing them will help many families whatever their background, and provide a more equal start to life for the baby

She went on to comment about the baby box project in Scotland:

The Scottish baby box contains a number of very useful baby items that can support the health and wellbeing of new babies including an electronic thermometer, a baby-carrying sling, a bath thermometer and a range of clothing. Most importantly, by enabling parents to give their babies a safe sleeping space, baby boxes may reduce unsafe co-sleeping or babies sleeping in an inappropriate place such as a sofa

Perhaps we should embrace this universal policy [paywall] adopted by the Scottish government, but listen to the advice and concerns of professionals. Some opposition parties have put forward constructive suggestions to improve the baby box. Scottish Labour MSP Monica Lennon suggested using the baby box to promote breastfeeding and claims it provides a “unique opportunity” to encourage younger mums and those from poorer backgrounds to breastfeed.

Meanwhile, Dr Philippa Whitford might be waiting a long time for a response from the BBC about her and voters’ frustrations.