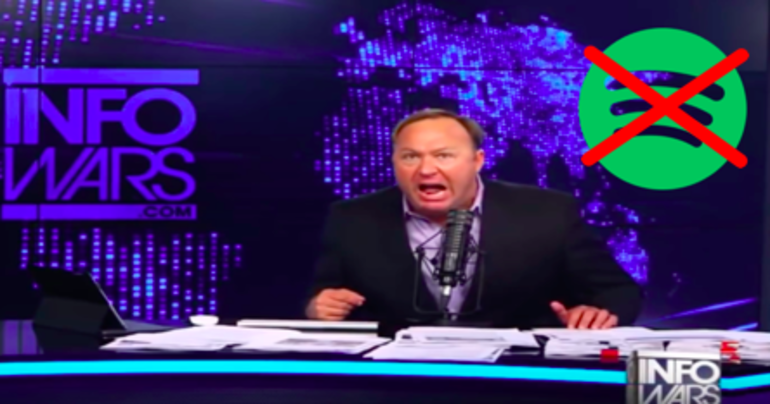 Spotify has removed some episodes of The Alex Jones Show following outrage and boycotts from its customers. This comes only days after the show was added to the platform. The streaming service claims certain episodes were removed because they violated its hate content policy.

We take reports of hate content seriously and review any podcast episode or song that is flagged by our community. Spotify can confirm it has removed specific episodes of ‘The Alex Jones Show’ podcast for violating our hate content policy

Spotify does not permit content whose principal purpose is to incite hatred or violence against people because of their race, religion, disability, gender identity, or sexual orientation.

Jones founded InfoWars in 1999 and The Alex Jones Show has since become one of the most popular conspiracy theory and fake news platforms with over 2.4 million subscribers. In what was arguably his lowest moment, Jones told his subscribers that the Sandy Hook massacre that left 26 people dead was a hoax. He argued it was a left-wing false flag attack in order to support gun control arguments.

Sandy Hook is a synthetic completely fake with actors, in my view, manufactured. I couldn’t believe it at first. I knew they had actors there, clearly, but I thought they killed some real kids.

The parents of children killed in the tragedy have suffered relentless abuse from Jones’s cultist fan base. The most notable example is the case of Veronique De La Rosa and Leonard Pozner. Their child, Noah Pozner, was killed during the attack at Sandy Hook. InfoWars called De La Rosa a “crisis actor”. And since Jones’s hoax claims, the couple has received constant death threats and online harassment. The harassment has forced the couple to relocate seven times.

In a video posted by InfoWars on 17 April 2018, Jones said: “I believe Sandy Hook happened. And early on, I was being bullied by internet folks and others to say nobody died.” But the damage had already been done.

Angry Spotify customers, meanwhile, took to Twitter to vent their dismay at Spotify’s recent decision to add Jones’s podcasts to its platform.

Hey @Spotify – I am a customer and heard that you are allowing Alex Jones air a podcast through you. If this isn’t pulled within a week, I will cancel your service.

Alex Jones has been responsible for harassing parents of Sandy Hook children, Vegas shooting victims and threatening to kill the Special Counsel. And you’re now hosting his podcasts?? https://t.co/dAIYiNKdXP

Looking for a replacement for @Spotify since they're hosting Alex Jones's podcast. Recommendations?

These comments prompted Spotify to remove some of Jones’s podcast. Some customers were content with this, while others were furious that some podcasts still remained:

Who woulda thunk that a man who harassed victim’s families of a tragedy he claims is a “deep state hoax” would be considered hateful?

Thank you for your humanity @Spotify.https://t.co/HmxQWnUXM6

The same Alex Jones who terrorized parents grieving over the murder of their children at Sandy Hook Elementary. THAT Alex Jones.

Not good enough. Not even close.#DeleteSpotify

I don't love that @Spotify is taking the strategy of removing episodes of InfoWars shows instead of simply booting it / Alex Jones off their platform. Why doesn't his track record of abuse prompt tech companies simply to refrain from having *any* relationship with him?

Jones is currently being sued for defamation by parents of the children who died in the Sandy Hook tragedy, including Veronique De La Rosa and Leonard Pozner. However, Jones wants the lawsuit dismissed under Texas free speech laws. And he is also seeking $100,000 from the parents to cover court costs.

With a potential defamation lawsuit and an increasingly restricted platform, this could be the beginning of the end for Alex Jones. And his credibility continues to plummet. But with fans including Donald Trump and a dedicated following of over 2.4 million YouTube subscribers, taking Jones’s fake news down will be a tough job.

Removing videos and podcasts is a step in the right direction, but companies such as Spotify, Facebook and YouTube need to do more, and they need to do it fast.

– Read our other articles on Alex Jones.