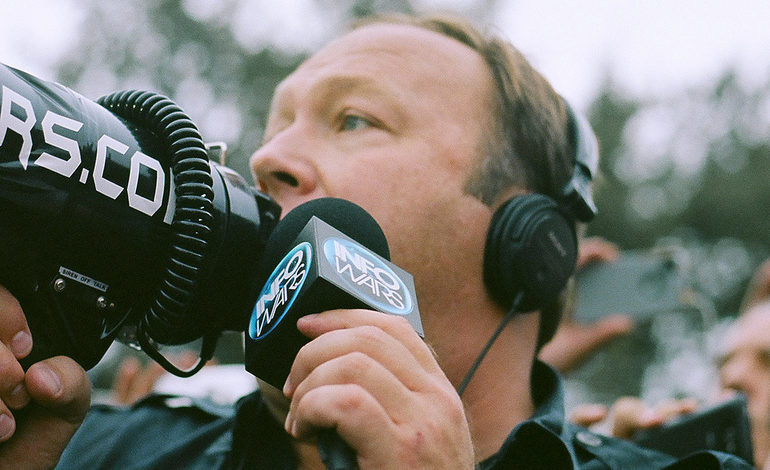 Millions of people follow Alex Jones’s InfoWars site. Even the US President is allegedly a fan. But Jones is a conspiracy theorist. And his wild, right-wing rants have got his site a reputation for being ‘fake news’. Now, it appears Jones may have just been acting all along.

It turns out that the InfoWars host may not be all that he seems. He is currently embroiled in a custody battle with his ex-wife Kelly for their three children. She maintains that he is not a “stable” person, and has used clips from his show as evidence. In response, Jones’s lawyer has said:

He’s playing a character. He is a performance artist.

If this is true, and the real-life Jones is actually not the same as his InfoWars persona, it raises serious questions about exactly who has the ear of the US President.

InfoWars has helped to spread ‘news’ such as the Sandy Hook massacre being a hoax and the Democrat Party having ties to a paedophile ring organised in a pizza restaurant. Jones has since back-peddled on the Sandy Hook theory. But the so-called ‘Pizzagate’ scandal was such a popular claim during the 2016 election that one of Jones’s fans even went down to the restaurant with a rifle ready to uncover the truth – which was, of course, that it was all made up.

One of the most worrying things, however, is that Jones has ties with Donald Trump – another man known as somewhat of a conspiracy theorist. According to Jones, Trump has even called him directly to ask for advice.

Trump also appeared on Jones’s show in 2015 after announcing his candidacy. He called Jones’s reputation “amazing”. And in return, Jones promised that his audience would vote for him.

In a video filmed on his way to court, Jones appeared to dispute his attorney’s claims about acting by insisting “I am completely real and everybody knows it”. In another, he said he is not the “right-wing extremist” that people think he is; but that he believes the conspiracy theories he propagates.

There is no doubt that Jones performs, though. Some of his most notable videos, for example, feature him grunting and taking off his shirt. And his ex-wife claims he also removed his shirt during a family therapy session.

And that wasn’t even the most ridiculous thing revealed about Jones that day. When asked why he had failed to remember basic information about his kids in a deposition – like what grade they’re in at school, he said it was because he’d eaten “a big bowl of chilli” at lunch.

In short, whether Jones is a “performance artist” or not, serious questions remain about exactly who has the ear of the US President. And thanks to the ongoing court case, we’ll probably hear a lot more about Trump’s favourite conspiracy theorist in the days to come.