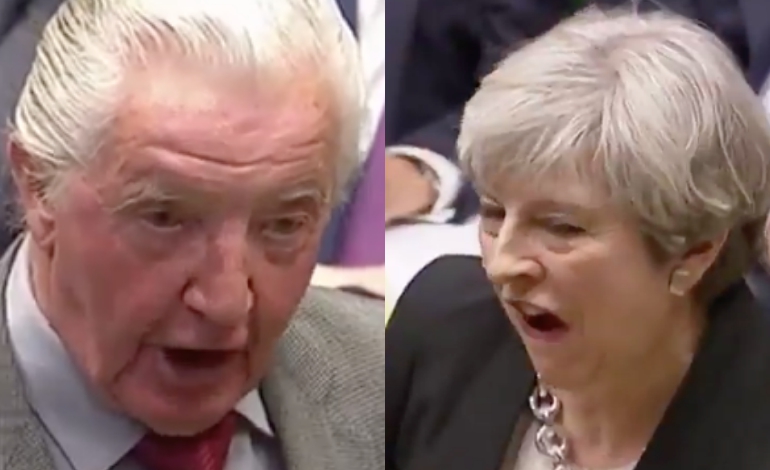 Dennis Skinner has called out Theresa May for trying to “kid people” into believing the upcoming general election is about Brexit. And the veteran Labour MP doesn’t mess about when giving what he thinks is the real reason for the snap vote on 8 June.

‘Tedious Theresa’ is ‘kidding’ us

In an interview with The I, Skinner says he doesn’t believe “the fairy story put forth by Tedious Theresa”. The PM has said that she called a general election to “seek support” for the government’s Brexit plans; and that the other political parties were “game playing” to try and derail her plans. But Skinner says that’s “not true”:

She tried to kid people, especially the media, over why she’s having an election… I sit there every day. I know what happens in the Commons. The idea that somehow she’s had to battle to get Brexit through is nonsense.

So just what does Skinner believe is the real reason May has called an election? He says:

It’s quite clear: it’s because the Crown Prosecution Service are due to make a decision on Tory election expenses… She could be in power one week, and if they’re charged, she’ll be out next week.

Wheels falling off the battle bus?

Skinner’s intervention comes after he asked the PM if Tory MPs being investigated over alleged election fraud would be allowed to stand on 8 June:

As The Canary has documented, the Crown Prosecution Service (CPS) is considering charges against 30 MPs and agents. It is unknown how many of these are agents and how many are MPs. But the CPS will make its decision during election campaigning. This could mean it may prosecute MPs at the same time they are standing for re-election.

‘The country has a right to know’

I would hope the press would be smart enough to write the proper story… the country has a right to know.

But whether the press will report on Tory election fraud properly remains to be seen. Even though it should be at the heart of this election. Because not only could it derail the 2015 election result, it could also severely undermine the legitimacy of this year’s. If ever there was a time the public needed veteran MPs like Skinner speaking out, it’s now.

– Read more from The Canary on election expenses and the general election 2017.