Our country just jailed a homeless woman for six months over 50p. This is why the Tories have to go. - Canary 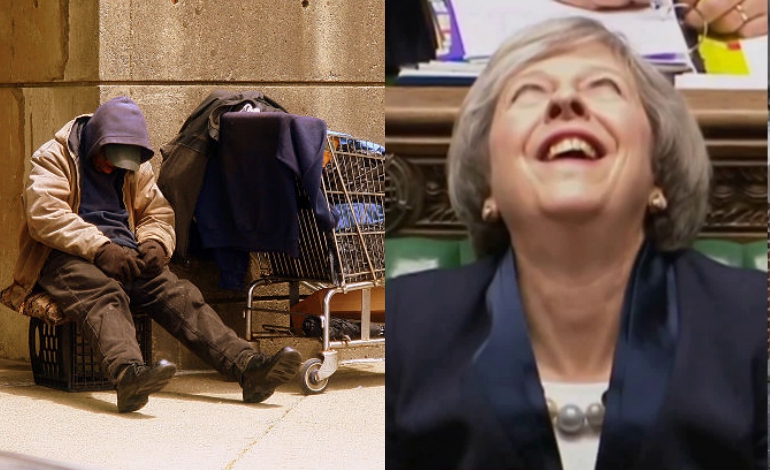 A homeless woman has been jailed for six months for asking for 50p. Despite having difficulties with reading, writing, and understanding, the woman did not have a lawyer. The case is the epitome of everything that is wrong with the Conservative government.

Marie Baker was subject to an injunction after begging from vulnerable and older people. But the injunction didn’t just cover aggressive or targeted begging. It included all begging.

The case centred around Baker asking two people for 50p in Worcester, following that injunction. Baker claimed that she had an alibi and there was CCTV evidence. She alleged the matter was a subject of mistaken identity partly due to a police officer who was targeting her. But without a lawyer, she was unable to present or investigate the evidence that might have acquitted her.

And while District Judge Mackenzie said he was “disturbed and concerned” that she didn’t have legal aid, he sentenced her to six months imprisonment regardless. He further stated:

The breaches themselves, if not trivial, are at a very low end of the scale and something which the court would be very loathed to send Ms Baker to prison for, if anything else could possibly work but this court cannot simply give repeat injunctions and allow people to go continuing begging, continuing to persist in a nuisance to the population, without some real teeth being given to the injunction.

Since 2010, the Conservative government has slashed legal aid. Figures from 2015 show that about one in five people facing criminal charges in magistrates courts did not have a lawyer. And magistrates have expressed concern that justice is being eroded. One stated that self-represented defendants:

do not understand fully the process, don’t feel as though justice has been served and you get the impression they are forced to plead guilty because of the fear of fees and court costs, even when they feel they are innocent.

There were added difficulties in Baker’s case because the breach of an injunction is a civil rather than criminal offence. Mackenzie explained:

The President of the Family Division made it clear that legal aid in these sort of cases, though it is for a civil contempt, is criminal legal aid. That has caused some difficulty, because of the way legal aid works with solicitors getting fragmented franchises for dealing with specific types of work.

And he attests to it being a common problem:

This court has experienced, on more than one occasion, great difficulties in getting a solicitor who is prepared to deal with criminal legal aid for a committal in breach of Housing Act injunctions. It has proved somewhat difficult.

Meanwhile, issues such as benefit cuts, sanctions and the bedroom tax – to name but a few – have all contributed to rising homelessness. Figures from 2016 show a 16% increase in the number of homeless people from the previous year.

And as Jon Sparkes, the chief executive of homelessness charity Crisis, points out:

Behind these statistics are thousands of desperate people, sleeping in doorways, bin shelters, stations and parks – anywhere they can find to stay safe and escape the elements.

This is what the Tories have done to our country. We are now living in a society where a vulnerable person is unable to get legal aid. And because of this, she is now spending six months in prison.

Meanwhile, cuts to welfare have led to homelessness and poverty. People who need help the most are being denied assistance and are forced into appalling conditions. These cuts are wrecking lives, making people ill, and causing deaths.

But we have an opportunity. We have seven weeks to mobilise people to get rid of this Conservative government. And we have to grab this opportunity. These are not statistics – these are our friends, relatives and neighbours. These are our communities and our services that are being decimated. And it is down to all of us to ensure the Tories do not have a mandate to continue this destruction.

Featured image via Wikimedia and screengrab