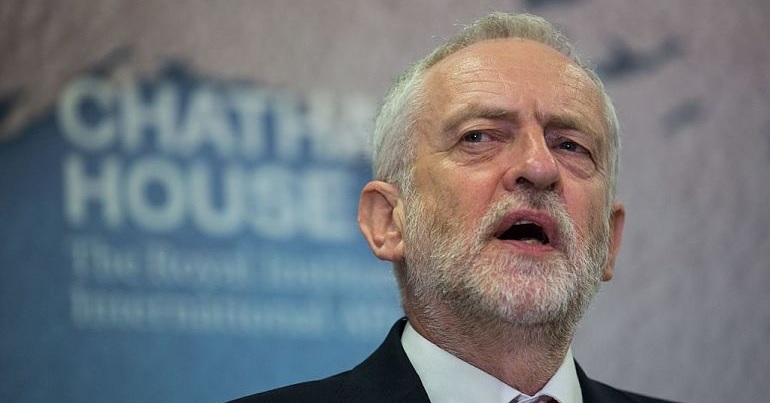 Rupert Murdoch’s media outlet reports that the Labour leader is under fire for a speech he made in 2010. In fact, it quotes a member of the campaign group Labour Against Anti-Semitism saying that, under certain circumstances, Corbyn could be “suspended – and even face expulsion” for his comments.

And it’s not the first time of late that critics have used this sort of language about Corbyn. It appears that efforts to oust the Labour leader are not far off.

Corbyn spoke at a rally outside the Israeli embassy in 2010; a year after the country had obliterated Gaza in Operation Cast Lead. As Noam Chomsky describes, this devastating assault was “one of the most cowardly and vicious exercises of military force in recent memory”. At the rally, Corbyn spoke of his visit to Gaza after the operation. He said:

I was in Gaza three months ago. I saw the mortar shells that had gone through the school buildings, the destroyed UN establishments, the burnt-out schools, the ruined homes, the destroyed lives, the imprisoned people, the psychological damage to a whole generation who’ve been imprisoned for as long as the siege of Leningrad and Stalingrad took place.

This is a war crime that is being undertaken, but this time on live television.

The Labour leader’s office says he highlighted the Nazi siege of the two Russian cities to compare “the conditions of civilian populations in besieged cities in wartime”. But critics claim the comment amounts to a comparison of Israel to Nazi Germany and is antisemitic.

It’s not the only time recently that someone has made this sort of accusation. Serial Corbyn-critic Dan Hodges also suggested, in a Sky News debate, that the Labour leader is antisemitic because he hosted a parliamentary event on Gaza where a Holocaust survivor likened Israel’s actions to those of the Nazis.

The basis for these critics’ argument is that the International Holocaust Remembrance Alliance (IHRA) includes comparing Israel’s current policies to the Nazis’ as an example of antisemitism in its definition document. In its code of conduct, the Labour Party doesn’t include this as an example of antisemitism. But it does recommend Labour members should “resist” making such comparisons because it carries a “strong risk” of appearing prejudicial.

A spokesperson for the vehemently anti-Corbyn Labour Against Anti-Semitism, however, pointed out what it believes could happen if Labour did adopt the IHRA example:

It looks increasingly clear that if the IHRA definition were re-adopted by the Labour Party then Jeremy Corbyn might himself be suspended – and even face expulsion.

Is that why it is being so strongly resisted?

For those who would rather see the back of Corbyn, a promising opportunity is looming. A number of Labour MPs have engineered a vote in September to force party members into adopting the full IHRA definition. Labour peers in the House of Lords are also reportedly planning to do the same.

Following the uproar from some over its code, the Labour Party has already said it will revisit it. And Corbyn’s party denies that the examples given so far show him comparing Israeli policy to that of the Nazis.

But now, people are openly musing about how this situation could bring Corbyn down. And there’s no smoke without fire. He’s already survived two coup attempts since becoming Labour leader in 2015. It’s not hard to see how a third might be on its way.

Whether Labour members and the wider public would turn against Corbyn in those circumstances, however, is another matter entirely.