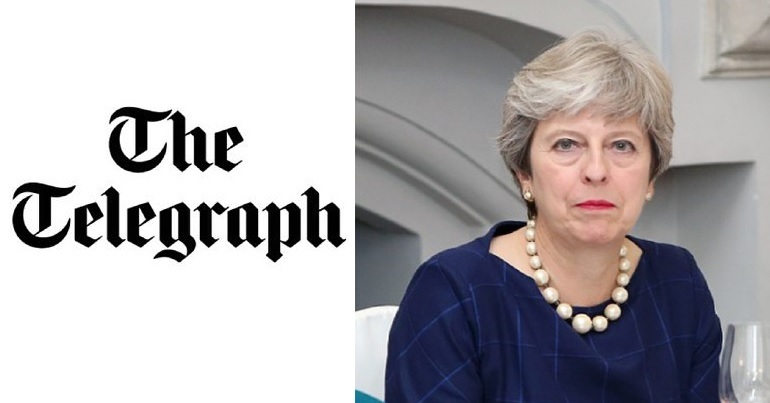 The former editor of the Telegraph has written an article questioning [paywall] why Etonians have been “shunned” from the Cabinet. Charles Moore also asked where “new talent” will come from.

Championing pro-Brexit old Etonians like Boris Johnson and Jacob Rees-Mogg, the article also makes a bizarre dig at Theresa May.

“Where will the new talent come from?”

Moore was previously editor of the Telegraph, Sunday Telegraph and Spectator. All three are owned by the billionaire Barclay brothers.

In the article, he bemoans the fact [paywall] that now Johnson has gone, “for the first time ever, we have a Conservative Cabinet with no Old Etonians in it”. He celebrates the connections between Eton and UK politics. But his ‘argument’ actually sounds more a rallying call for the Bullingdon Club.

Moore attacks non-Etonian MPs – including May. According to ex-editor of the Telegraph, it’s [paywall]:

a mistake for Mrs May (who seems instinctively to dislike talent, and has certainly done little to promote it) to close off her party’s Etonian supply on principle.

But he doesn’t stop there. Taking a swipe at comprehensive schools, Moore says those who don’t go to Eton, which costs around £40k a year, shouldn’t suffer from the [paywall]:

wilful poverty of expectation which was endemic from the first in the imposition of comprehensive schools.

And he claims [paywall]:

These poor old Etonians face a “Darwinian fight for survival”, Moore laments. Even though he says Etonians, like [paywall] Johnson and Rees-Mogg, are “funnier, more human, more raffish” and “enjoyable” than the “stupifying boredom” offered by non-Etonian political figures.

People had plenty to say to Moore on Twitter.

For a start, they raised the fact that Eton only admits boys:

Really, is this a question in a country of 65mil? Well, with no women policy at Eton, and limited BAME surely that’s no representation of the countries diversity https://t.co/BXcFIGoSJG

Yes, that. Plus, what an insult this question is to women & girls. "If we can't select from Eton, where will the talent come from?" *Hand wringing* While 50% of the population goes "ummmm, hello? Are we fucking invisible?"

Some pointed out what a total shambles the UK is in thanks to Etonians:

Looking at the utter, utter mess ex-Etonians have caused over this Brexit disaster, I’d say the state sector.

This rather arrogantly implies that the only talent comes from Eton. If David Cameron and Boris Johnson are the best Eton can offer we could do with a rest from that kind of 'talent': they've created the biggest peacetime mess I've known in my lifetime.

And others were scathing about the ‘values’ they believe Eton instills in people:

perhaps having been to public schools like Eton etc should mean you CAN'T be an MP because clearly they learn values like greed, self-service, non-empathy to others, self entitlement and all the other attributes that make them truly despicable specimens

Meanwhile, a few observers took down the whole concept of elitism and privilege:

Nice to see the @Telegraph attempting to perpetuate the myth that Eton produces talent and leadership, when all it produces is a network that maintains privilege and power in the hands of a few

"There are good reasons why so many prime ministers were from Eton – while none have come from comprehensives" – this one sentence explains so much about the problems in this country. Privilege and a sense of entitlement. This has to change.

And one tried to provide an answer to Moore’s question:

Who will govern us? Whatever shall we do?? Save us! Save us!!

Just kidding. They can fuck off back to Eton

Beyond elitism, there’s a dangerous undercurrent to Moore’s article. Johnson is currently top of the polls to become the next Tory leader. Johnson has also recently been in contact with prominent fascist Steve Bannon. So too has old-Etonian Rees-Mogg.

Moore’s article suggests that some old-school tie sharks are circling around May. Meanwhile, speculative discussion of Johnson as leader has crept into other right-wing outlets. The Times [paywall], the Spectator [paywall] and other articles in the Telegraph [paywall] have all sowed seeds of doubt in May and championed Johnson. While few will miss May, however, the prospect of Johnson as PM is truly horrifying.

Featured images via EU2017EE/Flickr and Wikimedia