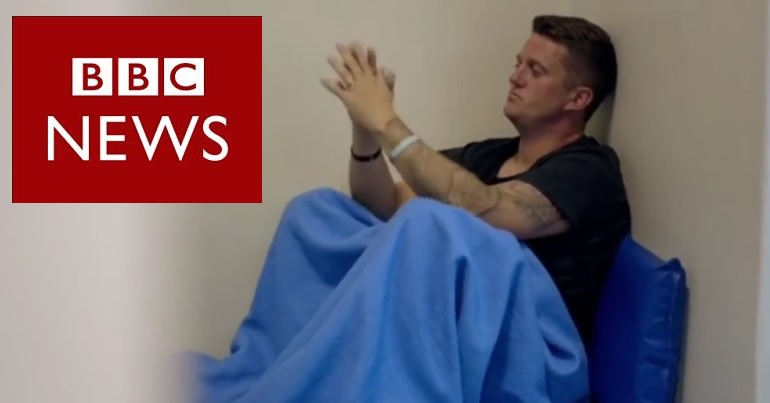 The BBC has suffered the mother of all humiliations over Stephen Yaxley-Lennon (aka Tommy Robinson). Many people have called out the public broadcaster for its sympathetic coverage of the former leader of the English Defence League (EDL) since he got out of jail.

But the BBC‘s disgrace doesn’t come mainly from this criticism. No, the broadcaster’s shame lies in the fact that even the Sun managed to rustle up a more decent reaction to the extremist‘s release than the BBC.

As one social media user commented, we really have now entered a parallel universe.

The Sun shines for a change

Yaxley-Lennon landed himself in jail for contempt of court earlier this year. He was live-broadcasting outside a sexual abuse trial at the time. But he had already been in trouble with the law. So as Snopes reports:

He was jailed for violating a court order, breaching the terms of an existing suspended sentence, and potentially risking the collapse of an ongoing trial.

His supporters have tried to paint the Islamophobe as a wronged martyr during the case. But as its political editor points out, the Sun doesn’t agree:

The Sun Says today: Tommy Robinson is not a freedom fighter. He is a nasty thug and a grandstanding idiot. pic.twitter.com/Ad6tCPcoL7

The Sun says it has “no sympathy” for Yaxley-Lennon because he “blatantly flouted” reporting restrictions and “almost wrecked” the trial. For obvious reasons, the Sun didn’t condemn Yaxley-Lennon for his xenophobia. And it’s a bit rich that the tabloid, whose now-closed sister paper hacked the phone of a murdered schoolgirl, is lauding the justice system. But it’s a valid, and surprising, criticism nonetheless.

I'm no fan of The Sun but they've hit the nail on the head here.

The BBC‘s coverage of Yaxley-Lennon’s release, however, hasn’t won it any fans. People have criticised it for providing a platform for his supporters without challenging their depiction of the ex-EDL leader as a freedom-fighting free-speech advocate.

Just listening to @BBCr4today. Why is no other guest countering @RaheemKassam on Tommy Robinson? Why is he being allowed to make out he's a legal expert commenting on legal policy? Why wasn't he described as as involved with Breitbart? What on earth is going on?

If this shocker thinks your outfit is 'improving' because you went easy on a racist thug, you should probably take a look at how you platform the far-right #BBCNewsnight https://t.co/1YTEf5oIs1

But as Guardian journalist Owen Jones pointed out, it’s certainly not the first time the BBC has normalised a dangerous far-right figure:

The BBC made Nigel Farage. He'd be nothing without them. And now the media is going to normalise the new far right of Steve Bannon and Tommy Robinson. https://t.co/WPeBi0da1x

The skewed reporting on Yaxley-Lennon is particularly striking right now. Because it’s happening at the same time that the media is doing its best to portray Labour leader Jeremy Corbyn as a rampant antisemite.

This is the state of BBC News: the soundbite clips on the BBC1 6pm news:

On Labour anti-semitism: 1 positive voice John McDonnell vs 2 attackers
On Tommy Robinson: 1 anti racist vs 3 Robinson supporters inc one from the US + Robinson himself

All paid for by us!#BBCBias

So in this strange new world, a long-time anti-racism campaigner is allegedly the enemy of tolerance. And a man only famous for his intolerance of Muslims and refugees is a freedom fighter.

No wonder that, in this alternate reality, the public broadcaster scores below one of the country’s worst tabloids on decency and truth. Because it’s apparently a topsy-turvy world we live in now.