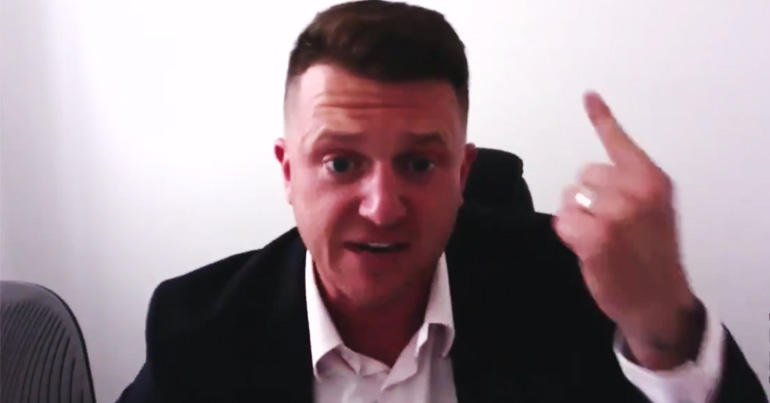 Stephen Yaxley-Lennon (aka Tommy Robinson) is trying to escape prison by asking US president Donald Trump for “political asylum”. The irony is obvious. But it also reveals something deeper about his true motivations.

Senior judges found Yaxley-Lennon guilty of contempt of court at the Old Bailey on 5 July. It resulted from Yaxley-Lennon’s livestreaming outside Leeds Crown Court during a series of grooming gang trials on 25 May 2018. The far-right figure denied any wrongdoing. But judges said he was guilty of breaking reporting restrictions on the trial.

On 9 July, the judges said Yaxley-Lennon’s actions encouraged “others to harass a defendant” and to undertake “vigilante action”. A day before on 8 July, Yaxley-Lennon appeared on far-right website Infowars to talk about his situation. And without a hint of irony, he pleaded with Trump for “political asylum” in the US:

For those that think the rumours of #tommyrobinson seeking asylum in the United States may be exaggerated, hear it from the "man " himself.
Trust me, it's the funniest thing you will have seen all day 😂😂😂😂😂😂😂😂😂😂😂😂and pic.twitter.com/uyj2flf1eL

Yaxley-Lennon has previously called for “an end to Islamic immigration” to the UK to stop “preachers of hate”. He led the short-lived UK branch of anti-immigration group Pegida. And he’s also been closely associated with fascist group Generation Identity. Nonetheless, he said on Infowars that he felt like he was being “sentenced to death” and pleaded for “evacuation” from the UK before being sent to jail. Contempt of court carries a maximum two-year sentence.

Twitter was filled with joy at Yaxley-Lennon’s appeals. Many users pointed out the obvious irony of his attempt to become a ‘refugee’:

Not sure there's enough irony in the world to cover the fact #TommyRobinson is now desperately requesting refugee status. pic.twitter.com/4OUbmaL8T2

The idea that Tommy Robinson is now trying to seek asylum in the US really warms my heart. U either die racist or live long enough to see ur self become the refugee

So, a guy who has built a career demonizing immigrants and refugees suddenly seeks refugee status!https://t.co/3zwBO7jgFs

Some cut through the laughter and rhetoric to offer insight on what’s really going on:

Tommy Robinson fans supporting his decision to seek asylum in the USA is testament to the fact that indeed they are ALL racist. Fundamentally their problem is not with refugees or asylum seekers taking jobs/space, it's the idea of black and brown people doing it. Period.

'Tommy Robinson' is the classic schoolyard bully – thinks he's a big man when he's got numbers behind him, yet the minute he's challenged, goes running to a parent.

It's really not any more complicated than that.

While others took the chance for irreverent jokes:

Tommy, love, how many safe countries did you pass through before reaching the US to ask for asylum? https://t.co/VLEVfMNPhB

I firmly believe Tommy Robinson should be offered the same welcome as any other refugee seeking asylum in the United Staes, and be locked in a cage and treated like garbage.

There is SO much irony in Tommy Robinson’s case:
He thinks he’s above the law, can’t respect British laws, and wants to seek “political asylum” in the USA. This is the same guy who’s accused minorities of not respecting British law & has routinely demonised asylum seekers. Lol 🥴

Anti-fascist podcast 12 Rules for WHAT pointed out that Yaxley-Lennon’s actions are different from many other far-right figures and groups in the UK. Groups such as the BNP have tried to create a movement against immigration and non-white people. Instead, Yaxley-Lennon’s created a “movement that’s not really a movement, it’s like an audience”. He’s managed to establish a public platform in which “the entire world becomes… mediated through Tommy Robinson”. As a result, his supporters form a ‘cult of personality’ around him, rather than specific messages or ideologies.

This means Yaxley-Lennon’s supporters can easily ignore hypocrisy in favour of supporting whatever claim he’s making at the moment. He then uses this to take huge amounts of money from his fans.

The latest plea for “political asylum” in the US – even after previously trying to illegally enter the country – is the perfect example of this. As Guardian journalist Hannah Parkinson said, Yaxley-Lennon “becoming an asylum seeker” would be a fitting end for his story of hypocrisy and double-standards. But it’s more likely he’ll end up in prison, subject to the same justice he’s demanded is applied to others.