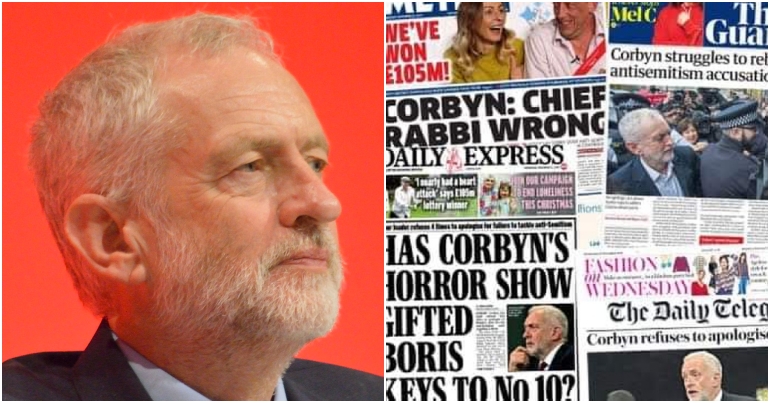 This article was further updated on 28 November at 12:55 to include a new copy of the letter with corrected contact details.

This article was updated on 28 November at 10:23 to include a statement from United European Jews after the authenticity of this letter was disputed online.

Following the Chief Rabbi’s comments and Jeremy Corbyn’s interview with Andrew Neil, allegations of antisemitism in the Labour Party have once again dominated the mainstream media.

But there’s one letter from a rabbi that probably won’t make headlines in most of the media. And it’s a letter that everyone who’s ever condemned Corbyn regarding antisemitism needs to read.

‘We totally condemn and reject these remarks’

The letter, written to Jeremy Corbyn, is signed by Rabbi Mayer Weinberger on behalf of the Executive Board of the United European Jews organisation. It describes the Chief Rabbi’s comments that British Jews are “gripped by anxiety” at the thought of a Labour government as “unusually disturbing”.

Please note that we totally reject and condemn in no uncertain terms these remarks, which does not represent the views of the mainstream chareidi Jews that live in the UK.

“Propaganda with a political and ideological agenda”

The letter doesn’t pull any punches in regard to the reasons behind the attack on Corbyn, saying:

We believe that such assertions are due to propaganda with a political and ideological agenda. An agenda, which, I might add, is diametrically opposed to fundamental Jewish values as well as the opinions of tens of thousands of Jews in our community.

And it thanks Corbyn for his:

numerous acts of solidarity with the Jewish community over many years and also welcome your assurances that Labour will do everything necessary to defend the Jewish way of life and protect our rights to practise our religion. 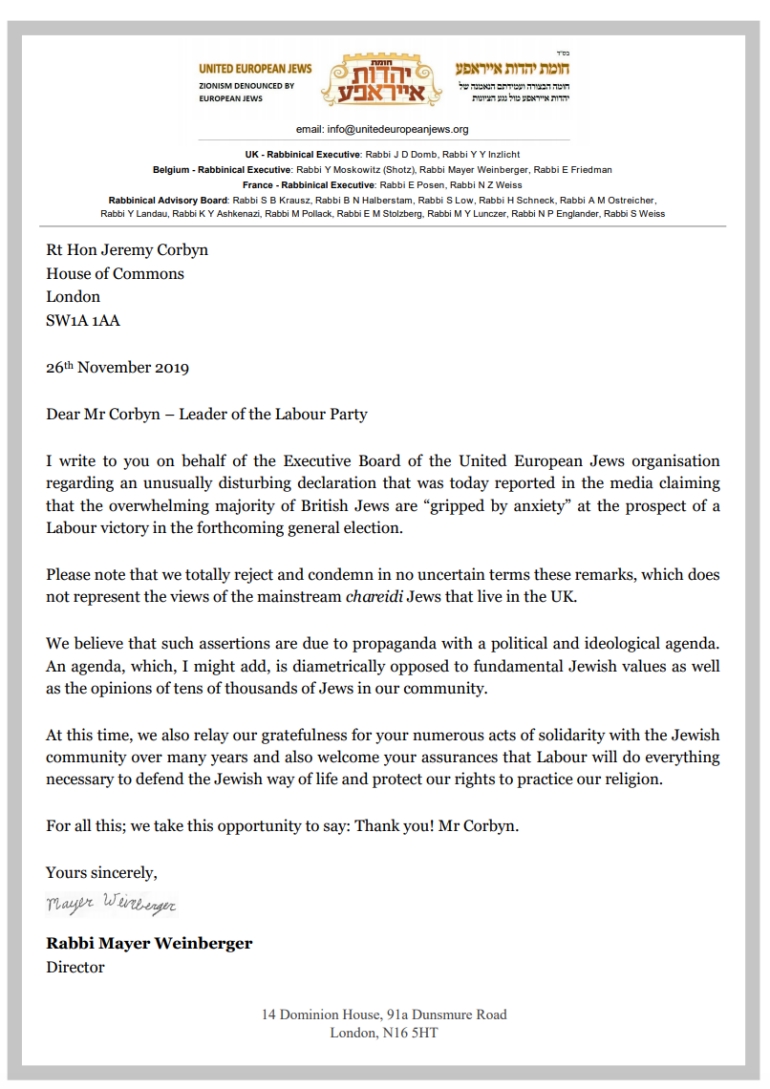 The authenticity of this letter has been challenged online. United European Jews told The Canary:

The letter was signed by our Executive Director Rabbi Meir Weinberger of Antwerp, Belgium. Our organization represents the views of tens of thousands ultra-orthodox Jews throughout Europe. The letter, written to Jeremy Corbyn and referring to it as “unusually disturbing,” states that Mirvis’ opinion does not represent “mainstream chareidi Jews.” There are about 70,000 chareidi Jews living in the UK.

The Chareidi community, which is often reclusive and whose voice if often underrepresented in the mainstream media, is particularly susceptible to misrepresentation on the part of officials who purport to speak in their name.

The letter, which declares Mirvis’ pronouncement as “propaganda with a political and ideological agenda,” and expresses gratitude toward Mr. Corbyn for his “numerous acts of solidarity” with the Jewish community, has been condemned online by Corbyn opponents as fraudulent, but its authenticity can be verified with the organization (www.unitedeuropeanjews.org).

Our organization is represented by 19 distinguished rabbis who lead prominent and respected congregations. This is not the first time chareidi declarations of gratitude to Corbyn were alleged to be forgeries. Earlier this year, a letter to the Times signed by 12 holocaust survivors and a letter signed by over two dozen rabbis were suggested as forgeries by the Jewish Chronicle and the Jerusalem Post, but turned out to be authentic.

Either papers have yet to issue an apology.

It added that the reason some people had problems with contacting it is that it had “just moved into new premises and our lines are not yet up and running.”

Our media is broken

This letter should be given the prominence the Chief Rabbi’s letter was given. But it won’t be. Because unlike the letter from the Chief Rabbi, who had previously described Boris Johnson as “a longstanding friend and champion of the Jewish community”, this letter won’t further the interests of the billionaire press.

And as one of those British Jews who disagree with the Chief Rabbi, this is devastating. Because I can see my identity being twisted by right-wing media outlets that directly promote racism and bigotry. There are so many of us who don’t agree that there is an antisemitism ‘crisis’ in Labour. Despite the fear of social media, many of us are speaking out. And I’m very grateful to Weinberger and the Executive Board of the United European Jews for writing something that so badly needs saying.