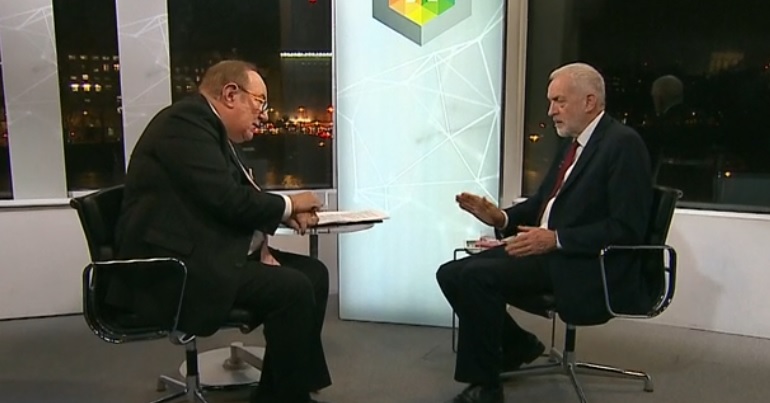 Andrew Neil has faced criticism for his interview with Jeremy Corbyn on 26 November. The BBC host has come under fire for “conflating” different sorts of debt while confronting the Labour leader on the party’s spending policies. The accuracy of Neil’s comments on one example he gave of antisemitism in the Labour Party has also been called into question:

The 'sting' of tonight's @afneil interview with Corbyn was based on an apparent falsehood. Neil claimed Lesley Perrin got off with a 'formal warning' for sharing Holocaust-denying material. In fact she resigned her membership as soon as the party opened investigation 1/

Most of all, people fumed over Neil not giving Corbyn chance to answer questions properly. A look at the journalist’s register of interests, however, makes some sense of him not giving the Labour leader an open platform.

Labour’s manifesto is extensive and transformative. Its nationalisation plans could reduce housing, energy, water, transport, and even broadband costs for many people and potentially save the country billions. Meanwhile, the party’s plans for workers, such as a Real Living Wage, higher public-sector wages, scrapping zero-hour contracts, and strengthening union rights would not only protect but embolden workers.

Labour also has a bold plan to resolve the housing crisis. It pledges to build over one million homes, with no less than half of them for social rent. For private renters, which it says amounts to 11 million people, it promises:

These policies would potentially benefit millions of Britons. But landlords who make a mint out of tenants, highly-paid bosses of poorly-paid workers, and mega-corporations profiting from the current government’s outsourcing of public services would likely lose the sort of profit margins they currently enjoy.

Effectively, the elite aren’t catered to in Labour’s manifesto; the people are. And Neil is among Britain’s elites. As the New Statesman reported in April:

thanks to his work for the BBC and Press Holdings and his chairmanship of ITP Media Group, which owns more than 60 magazines across the Middle East, he is a multi-millionaire. His private company boasts net assets of £8.8m and cash-in-hand of more than £900,000, according to the latest accounts. He and his Swedish wife Susan Nilsson, whom he married in 2015 and who is more than 20 years his junior, are the sole directors and shareholders. He has a flat in Chelsea, west London, a New York apartment, and a seven-bedroom house in the south of France, complete with gym, swimming pool, jacuzzi and satellite TV in every room.

Meanwhile, the journalist’s list of interests, published on parliament’s website, shows he doesn’t stray far from elitist circles in his work. He is, for example, the chairman of the Addison Club. The New Statesman says this is a “dining and networking group” that’s invited the likes of Michael Gove and Arron Banks to join them on occasion.

The interests list also details what events Neil has spoken at, chaired, hosted, and received fees for between August 2018 and July 2019. The BBC presenter gave speeches to investment company Jeffries, asset management company Vanguard, the Annual Conference of Insurance Brokers, and HSBC, among many others. And he gave speeches for entities connected to the housing market, such as property advisers Christie & Co and estate agent Knight Frank. Meanwhile, he was chair at a conference for the UK Landlords’ Federation.

Neil has the longest list of interests of all the journalists featured on the parliament register.

Half empty or full?

It’s generally understood that turkeys don’t vote for Christmas (i.e. that elites aren’t going to welcome a government that hands power (and money) back to ordinary people). What’s less commonly understood is that many who work in the mainstream media, or own it, are the elite too. Even less recognised is that, if the elites could look past their own short-term financial interests, there’s a lot in a people-centred policy approach to government that could benefit them too: a happier, healthier workforce and better infrastructure for their companies and employees to use, to name a couple.

But given the reaction to Labour’s platform, Britain’s elites don’t appear to be that forward-thinking. So any reaction to Corbyn and his party’s ideas should be seen in that light – including Neil’s interrogation.