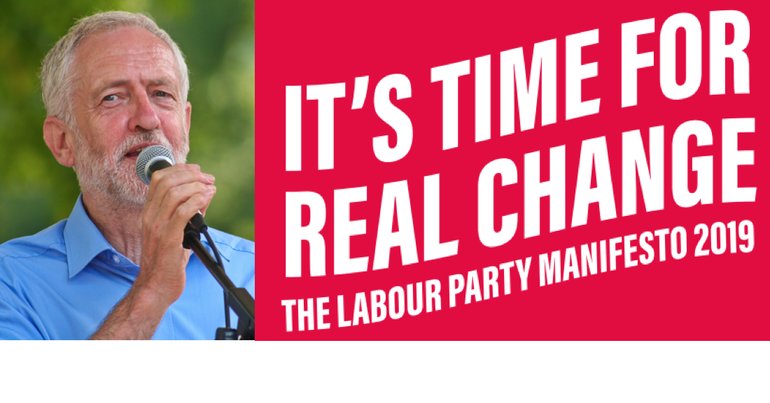 The Labour Party has released its manifesto for how it will rebuild Britain if elected into power on 12 December 2019. And if the public response is anything to go by, Boris Johnson and the Tories have a problem. Because Labour just reminded voters what it feels like when a party has a plan for the entire country.

Labour’s manifesto focuses on policies that will benefit the many, not the few.

The crony privatisation of our utilities has seen the cost of living sky rocket. Worse, in most cases the taxpayer is still footing the bill, while private companies reap the profits. Privatised water alone costs £2.3bn a year more than necessary. In energy, private companies have quadrupled their profits since 1996. Meanwhile, household bills for electricity and gas have soared by a third and a half (in real terms) respectively.

Ever-increasing energy, water and rail bills from private companies are out of control. But no more. Because Labour will renationalise these natural monopolies, together with mail and broadband.

Labour leader @jeremycorbyn pledges to nationalise rail, mail, water, energy and broadband if he wins a majority in this election https://t.co/BjffXNquzm pic.twitter.com/nA60Zvka6P

But rather than a nostalgic move to recreate the past, these plans are distinctly 21st century. The manifesto reads:

We will put people and planet before profit by bringing our energy and water systems into democratic public ownership. In public hands, energy and water will be treated as rights rather than commodities, with any surplus reinvested or used to reduce bills. Communities themselves will decide, because utilities won’t be run from Whitehall but by service-users and workers.

And reaction to the proposals has been a welcome one.

What I’m loving about #GE2019 is that the Tories have ZERO market-based solutions to counter Labour’s collectivist proposals.

Whether it’s housing, utilities, education or health & social care, the market has been a catastrophe for each and every sector.

This is why the big energy corps oppose us. Because Labour under Jeremy Corbyn will bring:

A truly transformative policy. The internet should be a public utility like our roads, rail and energy. Hyper fast broadband for all, free at the point of need will help to unlock this country's potential. #broadbandhttps://t.co/XWMWKoFXFD

Public services have been asset-stripped by nearly a decade of Tory austerity. If Labour wins on 12 December, they will be rebuilding those services. A National Education Service will scrap tuition fees, reintroduce maintenance grants, and promote lifelong learning.

A National Education Service, still my favourite policy from the stack of wonderful proposals in the #LabourManifesto – transforming lives for the better through skills and knowledge.

Labour will value technical education as highly as academic learning and will bring back maintenence grants. And yes, let's be clear, we will scrap university tuition fees!

Jeremy is on fire 🔥#ManifestoOfHope

If elected on 12 December, Labour has promised to scrap NHS privatisation and return to a publicly-funded, publicly-run health service. Shadow health secretary Jon Ashworth has pledged a fully-costed £26bn yearly cash injection to the NHS, along with a 10-point plan to reverse the impacts of austerity. The plans will return the NHS to the public.

As a lifelong advocate of patient safety, it is my responsibility to warn you that society cannot risk another 5 years of the Tories in charge of destroying our NHS. It's time to put our trust in the party that created the NHS. #LabourManifesto

Great response for Jeremy Corbyn just now as warns that Boris Johnson is preparing to sell off our NHS. The audience chants “Not for sale! Not for sale!” before he can even say the words himself. #VoteLabour #GE2019 #LabourManifesto pic.twitter.com/Qf08nVjdnQ

✅Fast & free fibre-optic broadband for all

A place to live, and a place to work

Labour’s manifesto looks to bring an end to the decade of falling wages and evaporating job security. Labour will use a windfall tax on Britain’s biggest polluters to create a million climate jobs. A Corbyn government would implement a Real Living Wage for all working people, and scrap the zero-hours contracts currently trapping almost 900,000 people. The party would also deliver a pay increase for all public-sector staff, who’ve seen their pay stagnate since 2010.

We will create a million climate jobs in every region and nation of the UK – good, skilled jobs that will bring prosperity back to parts of our country neglected for too long.

We will bring in a Real Living Wage of at least £10 per hour for all workers – with equal rights at work from day one on the job. We will end insecurity and exploitation by ending zero-hours contracts and strengthening trade union rights.

And there are a string of measure to tackle the housing crisis as part of a £75bn “housing revolution”. The manifesto reads:

Labour will deliver a new social housebuilding programme of more than a million homes over a decade, with council housing at its heart.

This is really important and so desperately needed…

Labour pledges to spend £75bn over 5 years on a "housing revolution" with the biggest council house building programme to end the crisis and transform the lives of millions of people.#GE2019 #VoteLabour 🌹 pic.twitter.com/JUsBEz95Ka

Labour will make tackling child poverty a priority.
👶Provide 30 hours free childcare a week to all 2-4 year olds,
🥪 Free school meals to all primary school children
💰Introduce a real living wage of at least £10 per hour for workers aged 16 and over. https://t.co/d3gETIYM1J

The excitement surrounding the manifesto launch is a much-needed reminder. This is how we should feel about the future: excited, prepared and determined. The terror and anxiety that’s come with every budget day for this past decade is not normal. It’s time to rebuild, repair, and renew a country torn apart by ideological austerity. It’s past time.