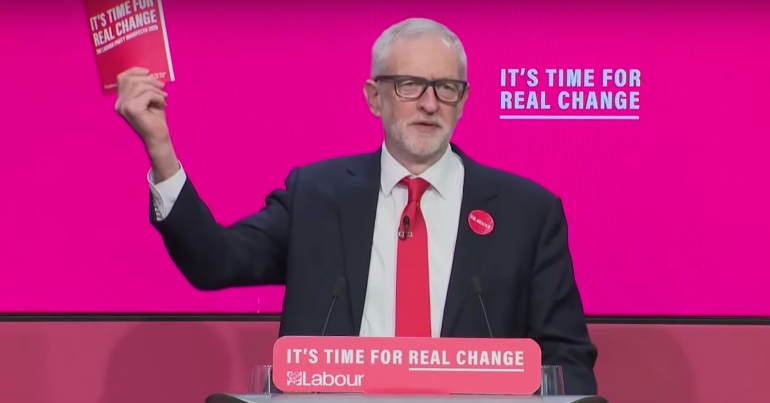 The Labour Party launched its manifesto on 21 November. It’s been billed as a “manifesto of hope”. And it’s exactly this. It’s a manifesto for real change for people and planet – not just in the UK but across the world.

Many of these policies – renationalising our services, the green new deal, and investment in our public services – will hit the headlines. And quite rightly, as they’re exactly what our country needs.

But there’s also some real buried treasure in the manifesto. And it’s these policies that will make the world a better and safer place for so many of us.

Changing the rules of the game

Right from the beginning of the manifesto, Labour makes it clear that it’s changing the rules of the game:

Labour will rewrite the rules of the economy, so that it works for everyone.

Because as Jeremy Corbyn says in the foreword:

I am not prepared to put up with communities blighted by lack of investment, endless cuts to vital services and millions struggling to make ends meet, while tax cuts are handed to the richest.

This game-changing attitude is evident in all parts of the manifesto. For example, as part of Labour’s green industrial revolution, it will ensure that:

Social justice will define Labour’s approach. We will make sure that the costs of the green transition fall fairly and are mostly borne by the wealthy and those most responsible for the problem.

And it makes it clear that:

Just 100 companies globally are responsible for the majority of carbon emissions. We won’t be afraid to tackle this wanton corporate destruction by taking on the powerful interests that are causing climate change.

Labour believes in climate justice. Wealthy countries like the UK bear the greatest responsibility for the climate emergency. Countries in the Global South that have done the least to cause climate change are already facing the worst impacts, such as rising sea levels, more frequent hurricanes and greater food insecurity. We have a duty to right this wrong.

In tackling the climate crisis, Labour will “put people and planet before profit”, ensuring that our national resources cannot be exploited for profit.

To help people enforce their rights, we will restore all early legal aid advice, including for housing, social security, family and immigration cases.

It also gives hope to anyone spied on by the police, promising that:

We will require judicial warrants for undercover operations and retain the Mitting Inquiry into undercover policing.

Perhaps most importantly, it recognises the causes of crime:

Conservative cuts to services have eroded the fabric of local communities. The rate of school exclusions has increased, as has social inequality – crime rates are driven by both.

And it gives the following commitment:

And it’s not just UK citizens who’ll benefit from the Labour manifesto. Because Labour puts human rights at the heart of its foreign policy. As well as immediately suspending arms sales to serial human rights abusers like Saudi Arabia and Israel, the Labour Party will ” immediately recognise the state of Palestine”.

It also sets out a clear programme to ensure that we learn lessons from the past, including:

a judge-led inquiry into our country’s alleged complicity in rendition and torture, and the operation of secret courts.

As well as issuing a:

formal apology for the Jallianwala Bagh massacre, and hold a public review into Britain’s role in the Amritsar massacre.

Conduct an audit of the impact of Britain’s colonial legacy to understand our contribution to the dynamics of violence and insecurity across regions previously under British colonial rule.

Labour’s manifesto also ensures that refugees are treated with the respect and humanity they deserve, stating:

Refugees are victims of wars, environmental catastrophes, famine or persecution… We will work with others to resume rescue missions in the Mediterranean, co-operate with the French authorities to put an end to the horrific camps, and establish safe and legal routes for asylum seekers

Go on, vote. You know it makes sense!

It’s hard not to like the Labour manifesto. Whether it’s any of the above, free bus travel for under-25s, scrapping Universal Credit, or investing in the NHS and education, it’s what this country so badly needs.

Unless, of course, you’re part of the 1% elite who earn over £160k a year. Only 310,000 people in the UK fall into this category. And they are “disproportionately male, middle-aged and London-based”.

Unfortunately, the billionaire press barons fall into this category, with just three corporations dominating 83% of newspaper reach in the UK. So don’t expect the establishment press to tell you the brilliant things in the Labour manifesto. It’s not in their interest. But it is in the interests of 99% of the population.

We’ve got a real opportunity on 12 December to vote for something that’s really radically different for both people and planet. So go on, vote. You know it makes sense.