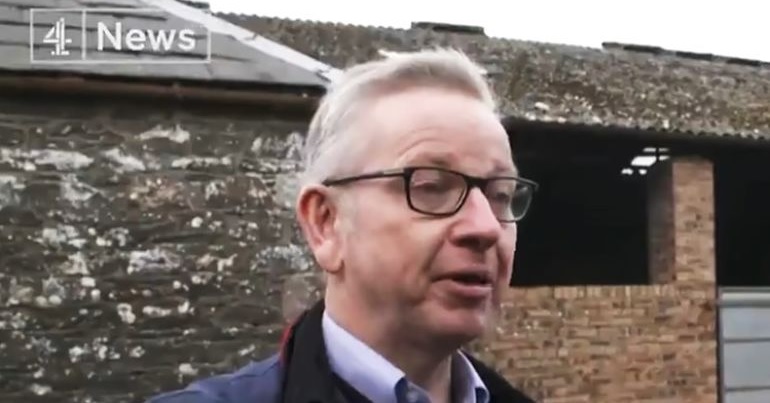 Channel 4 interviewed Michael Gove on 21 November. The outlet’s correspondent Ciaran Jenkins cornered the minister on the party’s lies. Gove’s response was beyond sinister. He painted Jenkins – and Channel 4 as a whole – as biased, left-wing zealots. Gove’s characterisation wasn’t in response to Jenkins behaving like any of those things, though. It was in response to the journalist asking him to confirm or deny a simple fact.

In the US, Donald Trump developed a strategy to counter media criticism. He branded outlets “fake news“. Now he refers to the media as a whole as “fake news”, and effectively pardons any reporter or outlet who writes sympathetically about him on a case-by-case basis. And that narrative has taken hold amongst his supporter base.

With the UK being a different animal to the US, however, right-wing politicians in the country are seemingly using a different approach. Gove’s interview with Channel 4 illustrates it perfectly:

“What you're doing…is mounting a rigorous left-wing case for a particular political point of view.”

Michael Gove responds to @C4Ciaran asking him whether the Conservatives will build six or 40 new hospitals. pic.twitter.com/fneKuNIuL2

In the interview, Jenkins asked Gove about the Conservatives’ alleged plan to build 40 new hospitals. To be clear, the party is categorically not building 40 new hospitals, The party plans to upgrade six existing hospitals and has allocated £100m in seed funding to 21 hospital trusts so they can “develop their business cases” for hospitals. In short, the government’s plans won’t mean people see new hospitals springing up around them. It means new buildings may appear at existing hospitals and some trusts will get to make plans for future development.

40 new hospitals. Is that true or false?

Gove affirmed the lie, then said:

It’s called scrutiny, Mr Gove. We’re just asking you simple questions about what is true or not so the voters can make up their minds.

Gove then doubled down:

you’re using this interview as an opportunity, and I completely understand it, to mount an argument… That’s perfectly fair journalism. What it’s not, is objective.

The minister went on to say that Jenkins was repeating a “Labour line” in his supposed argument. The correspondent pointed out that the BBC and independent fact-checkers came to the same conclusion as Labour on the veracity of the 40 new hospitals claim. Extraordinarily, Gove responded to this by highlighting his own party’s recent impersonation of a fact-checker on Twitter, saying that was “independent corroboration”. In Gove’s final flourish on Jenkins’ ‘polemics’, he said:

I think people will know exactly what you’re doing, Ciaran, which is fine, which is mounting a rigorous, left-wing case for a particular political point of view.

Don’t fall for it

So rather than tackling Jenkins’ question face on, or dodging it with the standard political non-answer answer, Gove used a different tactic. He painted the interviewer as left-wing, and aligned with Labour, for even asking that particular question. And he painted himself as the ‘good guy’ who has no problem with a reporter behaving that way, as long as Jenkins is honest with the public about that alleged bias. He also branded his own party as “independent” on facts. Essentially, he avoided being held to account over his party’s lies by smearing the reporter and spreading another lie about Jenkins’ motivation.

Furthermore, Boris Johnson has scuppered Channel 4‘s planned Leaders Debate by refusing to show up. The Tories are not only smearing the outlet, they’re no-platforming it:

Gutted we’ve had to cancel a planned Leaders debate on @Channel4 for this Sunday. @jeremycorbyn had agreed to take part but, after many weeks of intense discussion, we were unable to secure agreement from @BorisJohnson team. @krishgm wld have presented 1/2

In a country with a predominantly right-wing media landscape anyway, this behaviour isn’t healthy for democracy. Channel 4 is one the few outlets in the UK that isn’t overtly or consistently biased towards the right.

But Trump would be proud of the Tories’ trickery. Let’s just hope it doesn’t gain ground in the British public’s consciousness, like Trump’s has in the US.