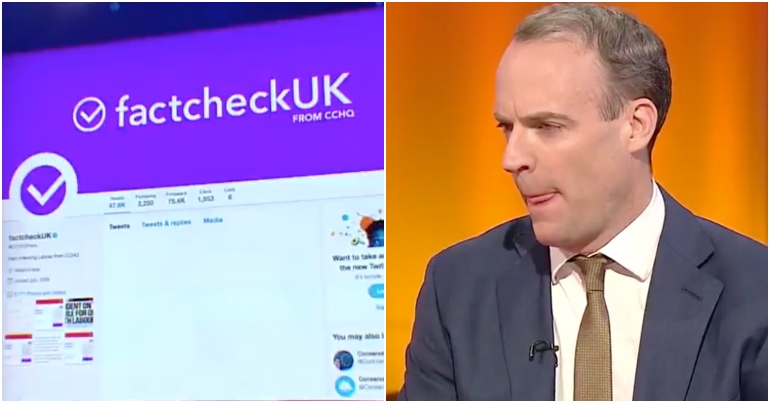 Foreign secretary Dominic Raab appeared on BBC Breakfast on 20 November to defend his party’s decision to temporarily rebrand its Twitter page as a “factcheckUK”.

But 11 words from Raab summed up why no one can trust the Tories – let alone rely on them to check facts.

‘Who really cares about this social media business anyway?’

Raab was repeatedly asked about why the party had decided to pull the Twitter stunt. But the best line he seemed to be able to muster was:

But as comedian David Schneider pointed out, this statement doesn’t quite stand up to scrutiny:

“No-one gives a toss about the cut and thrust of social media which is why we’re spending millions on it” pic.twitter.com/RVHLxtZT6g

And as other people pointed out, it also doesn’t match the reality of what we know about companies such as Cambridge Analytica:

Raab: "No one gives a toss about the cut and thrust of social media"

Oh yes, no one cares. Of course.

Raab’s line is obviously nonsense. And just one look at the figures the Conservative Party is spending on social media shows how far from the truth his comment is.

According to the Guardian, the Conservative Party spent £142,977 on Facebook and Instagram advertising in the first 18 days of the election campaign. And in the year prior to the June 2017 election, the party spent £2.1m just on Facebook.

That’s an awful lot of money to spend on something people apparently don’t “give a toss” about.

But this wasn’t the only ridiculous line Raab delivered during the interview. After being confronted with genuine fact-checker Full Fact’s comments on what happened, Raab stated:

Well who said Full Fact is the final arbiter of what the public get to see? … They’re not, there’s no god-given right set in law.

Well, Raab is right – there is ‘no god-given law’ – but unlike the Conservative Party, the public has good reason to trust Full Fact. It’s a registered charity that:

actively seek[s] a diverse range of funding and are transparent about all our sources of income.

And it has “a cross-party Board of Trustees and safeguards in place at every level of our organisation to ensure our neutrality”.

But given that the site regularly exposes Boris Johnson’s blatant lies with actual, you know, facts, Raab’s attitude is hardly surprising. For example, during the leadership debate, the site pointed out that Johnson said corporation tax was the lowest in Europe:

while Jeremy Corbyn “would whack it up to the highest in Europe”.

We don’t know Labour’s policy for corporation tax as its manifesto isn’t out yet, but its proposal at the last election was to raise corporation tax to 26% by 2020/21, which wouldn’t be the highest in Europe. For example, in France, it’s currently between 31% and 33.33%.

Hardly a fact the Tories’ fake account was likely to highlight.

You can’t trust the Tories

Raab’s response to the Twitter scandal shows why no one should ever trust the Tories. But if you’ve lived through nearly ten years of austerity and seen the brutality that successive Conservative-led governments have inflicted on this country, that should be clear already.

It’s time for a change. And it’s time to kick these smug, lying, elitist arseholes out of power for good.