While we’re on the subject of fact-checking, Boris Johnson just lied 3 times in 45 seconds - Canary 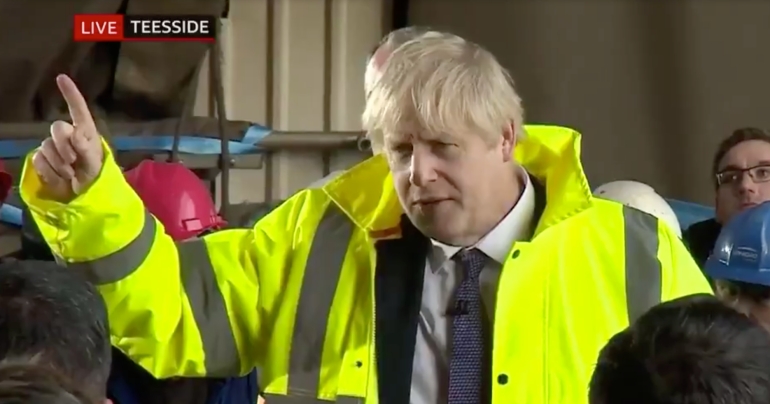 On 20 November, Boris Johnson hit the campaign trail in Teeside. And while we’ve all been distracted by the Conservative Party’s fake fact-checker Twitter account scandal, Johnson lied. Again. And again.

One voter nailed a crucial issue when they questioned Johnson, asking:

To begin with, Johnson was just incoherent:

I mean low tax for people of the working people.

During a Q&A on Teeside, Boris Johnson reveals Conservative plans to raise the amount people can earn before they have to pay national insurance from £8,628 to £12,000https://t.co/LYn4EbXmfh pic.twitter.com/OWNd77FueM

Then, however, Johnson obviously thought it’d be a lot easier if he just started lying.

I would just remind you that Jeremy Corbyn and the Labour Party would whack up borrowing and whack up spending so high that they would put a £2,400 tax burden on every family.

But there’s a problem with the £2,400 figure. Because it’s entirely made-up. Or in the words of Full Fact – the genuine fact-checkers, it was:

largely meaningless as the calculations and assumptions behind it have a number of flaws. …

They can’t know what the Labour party’s policies will cost because Labour hasn’t released its 2019 election manifesto yet and we don’t know exactly what all its policies will be.

The Conservatives’ calculation includes a number of policies that Labour hasn’t so far said will be in its manifesto, and one which it has ruled out.

Other calculations made by the Conservatives seem overstated, either by double counting costs or assuming Labour would introduce the fully-fledged policy from day one, rather than phasing it in.

And as the Guardian points out:

It also implies that all taxpayers would pay an equal amount towards Labour’s programme, which is not the case.

Now Johnson was in his stride, the lies just kept coming. He said that people should check Corbyn’s voting record because:

He’s actually voted against or in favour of tax rises of £7,800 on working families.

But if you actually do check Corbyn’s voting record, no such vote seems to exist. Corbyn has, however, voted to increase tax for those earning over £150k – something which is entirely consistent with his and Labour’s policies. While Johnson could argue these were “working” people, using the word in this way is extremely disingenuous, at best. Because the clear implication is that Corbyn voted for tax rises on all “working families”, not just the wealthy elite. And given the average wage in Teeside in 2015 was £22,487, it’s hardly likely Johnson was being asked about those poor long-suffering high earners.

In fact, those earning over £160k are classed as being in the top 1% of all earners. Only 310,000 people in the UK fall into this category. And they are “disproportionately male, middle-aged and London-based”. So it’s highly doubtful that these were the “people like us” the questioner was asking about.

It didn’t stop there, though. Because Johnson then went on to lie number three:

They always say that they’re just going to point the finger at billionaires or whatever. And in the end, it’s everybody who pays.

But this is just an unsubstantiated statement. In fact, it could also be described as “meaningless”. Because there hasn’t been a Labour government with such a radical agenda for many generations. So Johnson can’t say something is “always” the case when it hasn’t been tried. Put simply, it’s a lie.

Moreover, Labour is clear that it is only planning to target the ultra-rich. As shadow chancellor John McDonnell stated:

Someone on the national minimum wage would have to work 69,000 years to get paid £1bn and a newly qualified nurse would have to wait 50,000 years. No one needs or deserves to have that much money, it is obscene.

All politicians lie, so what?

Many people don’t expect honesty from politicians. They expect them to manipulate and obfuscate, never answering a direct question. But Johnson’s ability to lie is unprecedented in UK politics. The lies just seem to drip off his tongue wherever he goes. Only the day before, for example, he lied about Labour’s plans for corporation tax during the leadership debate. And that’s after Channel 4 pointed out he got it wrong the day before that. He’s also lied about things he’s said in the past. And he’s repeatedly shown he doesn’t give a shit about democracy.

The even bigger problem, however, is that he gets away with it, with the mainstream press uncritically reporting his words. That’s why it’s down to us. Each and every one of us. We need to get angry, get active, and expose these lies every time they happen. This is vital work. Because lives literally depend on us getting rid of this Conservative government.