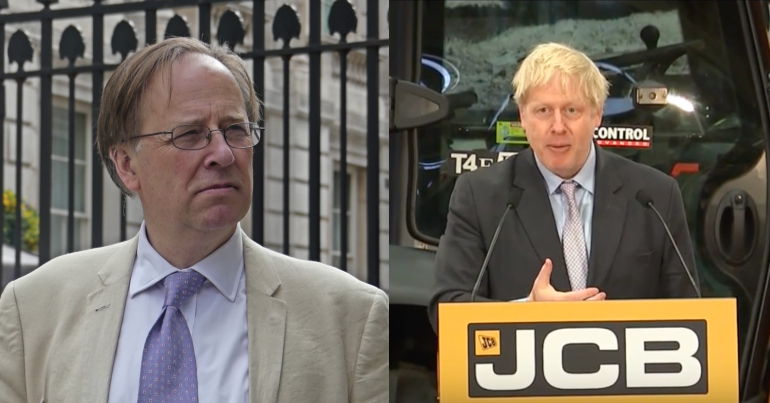 On 18 January, Boris Johnson was caught lying. He then repeated the lie. Three times. In one speech. Johnson then fled behind a closed door when Channel 4‘s Michael Crick challenged him about his statements.

The whoppers came during a speech in Staffordshire that was billed as Johnson’s bid to become PM.

I never said anything about Turkey. Ever. Honest guv!

Following his speech, Johnson faced a question about Turkey. During the Brexit referendum campaign, the discredited ‘threat’ of Turkey joining the EU was a key argument for Brexiteers. But this seemed to have slipped Johnson’s memory, as he replied:

Crick challenged him, saying that, as part of the Vote Leave campaign in 2016, he had:

suggested 80 million Turks would come to this country if we stayed in the EU, which was absurd then and is abusrd now.

He then posed the question many people would love to ask Johnson:

Doesn’t all of this show you’ll say anything just to win an election? In this case, a Conservative leadership election.

Apparently, the answer is yes. Because Johnson simply repeated the lie, insisting:

I didn’t say a thing about Turkey.

So Crick asked him if he “disowned” the remarks he’d previously made. Johnson replied:

Since I made no remarks, I can’t disown them.

It’s possible, of course, that Johnson just got confused. After all, there were times when he was foreign secretary that he was painfully noncommittal about Turkey; for example, he refused to condemn Turkey when it was raining down bombs on Afrin in northern Syria.

After Johnson had finished speaking, Crick followed him, reading out a quote he’d made about Turkey during the referendum campaign. But Johnson wouldn’t comment. Instead, he scarpered and shut the door on Crick.

Channel 4 News posted a video of the incident alongside footage of Johnson from 2016:

But this wasn’t the only deviation from the truth Johnson made during his speech. He has also claimed that he isn’t someone who “deprecates other countries and cultures”. This from the man who described women who wear burkas as “letter boxes” and Black people as “piccaninnies”.

There's just a chance that today Boris Johnson finally dug himself a hole he won't be able to get out of, even with that shiny yellow machine behind him. Maybe the day we can say #ByeByeBoris 👋 https://t.co/wtrguNjtiP

But Johnson has a history of lying and making offensive comments – and a history of getting away with it. So the fact that he still has a political career suggests he’s not going anywhere any time soon.

The Conservative Party may just be stupid enough to elect serial liar Johnson as party leader. But that shouldn’t stop us from exposing and shouting about those lies to ensure that the general public will never vote him into Number 10.