BBC denies mistreating Diane Abbott. But audience members disagree. And so does she. - Canary 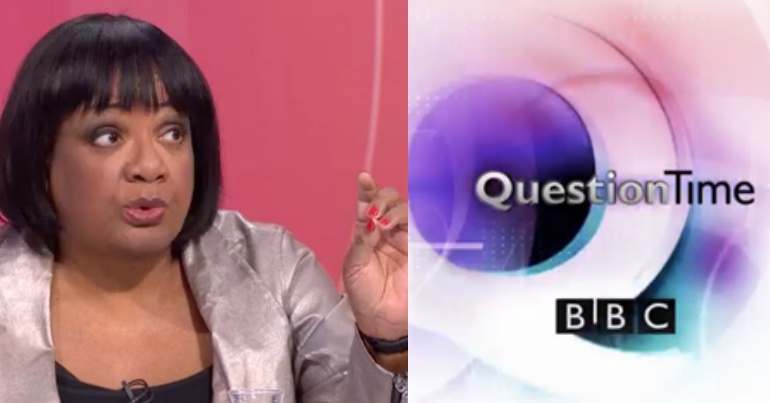 Shadow home secretary Diane Abbott appeared on BBC‘s Question Time on 17 January. A spokesperson for Abbott criticised the “hostile atmosphere” towards the Labour MP, in a broadcast that also stunned and angered viewers. The next morning, reports emerged alleging that this ‘hostility’ started before the show even aired.

Audience members claimed host Fiona Bruce ‘joked’ about Abbott in the ‘warm-up session’. The Canary has since spoken to one of those audience members. And despite the BBC‘s denial about this behaviour, both Abbott’s team and those present in the audience tell a very different story.

A spokesperson for Abbott told The Canary:

We are appalled by the treatment of Diane Abbott on BBC’s Question Time. It was clear that a hostile atmosphere was whipped up, propped up by reports of inappropriate and sexist commentary in the audience warm-up session.

Tonight I managed to wangle myself into the @bbcquestiontime audience. The way they stoked up the anti Dianne Abbott sentiment before hand was appalling – the BBC is in dire need of reform

Jyoti Wilkinson told The Canary what he witnessed. He described himself as a “battle-hardened activist” but said he wasn’t “prepared for the level of open hostility that was shown to the left”. Before the show, he claimed, Bruce had introduced Abbott in a different way from the other panel members:

She took it upon herself to instigate a roast. Comments such as ‘let her know what you really think’ and ‘some may think she is in the shadow cabinet because of her very close relationships with Corbyn, nudge nudge, wink wink’ were made… the carefully selected audience guffawed in delight as they had now been given licence to air their bigoted views in public. [One audience member] commented ‘I’m going to ask her to do a sum, but she will just claim its discrimination I’m sure’. This level of deliberate antagonism from the BBC is a disgrace, and the institution now desperately needs to be held to account.

Other people in the audience backed up Wilkinson’s experience:

I was in the audience of Question Time tonight – didn't feel like a balanced audience, though the Leavers were loud. The jeers against Diane Abbott were worse than could be heard on the broadcast; was some humour at Diane's expense from BBC staff before the recording.

Fiona Bruce basically made fun of Dianne Abott in the briefing before it aired and proceeded to do the same during the show, how is this presenter impartiality? 2/n

Was something relating to Dianne knowing Corbyn “really well” or they used to be “close” but can’t remember the exact words now! Then obvious jibes about Corbyn were made during the show too.

I’m told that prior to broadcast of tonight’s #bbcqt Fiona Bruce came out, introduced herself to audience and gave a 10 minute talk. Proceeded to make jokes about Dianne Abbott which were ‘in reality appaling’ then in rehearsal the floor manager did the same thing.

According to Wilkinson, Bruce’s introduction “legitimised hostility” towards Abbott for the rest of the programme.

The Canary contacted the BBC for comment. It denied these allegations, and said:

We firmly reject claims that any of the Question Time team treated any of the panel unfairly before and during the recording last night.

Last night’s programme generated strong views and opinions from both our panel and audience in response to recent developments on the Brexit story.

“The BBC should be ashamed”

But “a public broadcaster like the BBC“, said Abbott’s spokesperson, “should be expected to be a model of impartiality and equality”. They continued:

The BBC cannot claim anything of the sort when analysis of the programme shows that the only black woman on the panel was jeered at and interrupted more times than any other panellist, including by the Chair herself.

Given the ongoing racist abuse and harassment that Abbott endures, this point is vital. And the BBC has a role to play. As her spokesperson explained:

The media must stop legitimising mistreatment, bias, and abuse against Ms. Abbott as a black woman in public life. The BBC should be ashamed that their programming is complicit in such behaviour.

portrayed as a truly democratic spectacle… In reality, it is far from it. It is a farcical stage-managed state propaganda tool in which the BBC use and legitimise institutional racism, misogyny and bigotry to stoke up reactionary sentiment amongst the general population.

As The Canary reported, Question Time‘s supposedly unbiased panel also ganged up Abbott to claim that Labour was “way behind in the polls”. Bruce joined in the attack (led by right-wing columnist Isabel Oakeshott) and said: “No, you’re behind Diane – definitely”. The latest polls actually show Labour is ahead of the Tories.

Since Theresa May threw the country even further into chaos this week, perhaps there’s no surprise in this attack. The BBC and mainstream media have continued to attack Jeremy Corbyn and Labour since he became leader. But for the host and BBC staff to make ‘jokes’ about Abbott is simply unforgivable.

The BBC is in utter denial. But this time, it’s been well and truly caught out. It really should listen to Abbott and audience members who were actually there.

Featured images via screengrab and BBC/Wikimedia