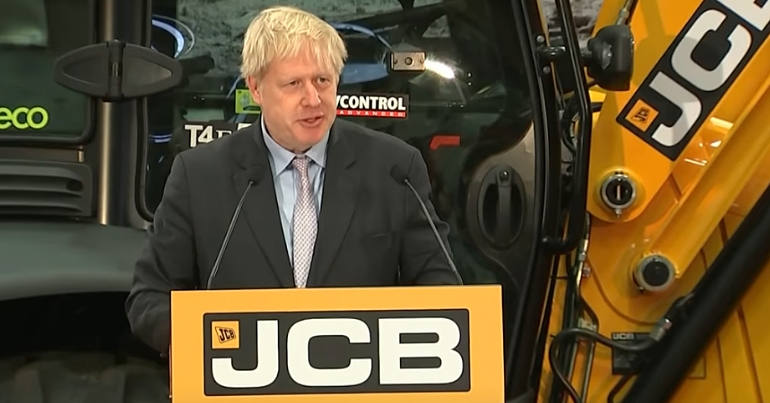 On 18 January, Boris Johnson went to the JCB factory in Staffordshire to give a speech about his vision for Brexit.

The chairman of the company, Lord Bamford, is a prominent Brexiteer and major Tory party donor. But Johnson’s advisers should probably have thought twice before allowing him to make a speech in front of a big yellow digger.

One journalist had some fun with this fitting oversight, much to the delight of the general public.

Johnson spent 25 minutes making fantastical claims about Brexit. The government hasn’t come up with an acceptable deal in two and a half years of negotiation. But Johnson appeared to think the whole thing is a cinch. He said that the EU would now be “flexible” about the Irish backstop because:

it’s only in the last few days and weeks of a negotiation that the big concessions are really made.

He also claimed that:

bureaucratic and logistical problems, that had previously seemed insoluble, are melting in the face of human creativity.

He went on to say that Brexit would lead to:

cheaper food, cheaper clothes… cheaper shoes and all that.

In fact, the Brexit vote has already caused “a significant rise in prices, especially food”. And a House of Lords report in 2018 found that, in either a deal or no-deal scenario, it is likely that the cost of food would further rise in the UK.

Johnson seemed to be on the verge of repeating his notorious claim that the UK would have an extra £350m a week to spend on the NHS after leaving the EU. He said:

Better hospitals. Use that three hund- I, I. There’s money now going into the NHS – fantastic.

But his most notorious lie came during the question and answer session at the end, where he denied that he’d ever mentioned Turkey joining the EU during the referendum campaign.

Johnson made his speech in front of a large yellow digger. And that triggered a memory for one journalist. Tom Peck, political sketch writer at the Independent, tweeted:

To be fair to the guy, he did always say he was going to "lie in front of a bulldozer."

And now he has, for forty straight minutes. pic.twitter.com/07mcrTDJDH

When Johnson was elected as MP for Uxbridge and South Ruislip in 2015, he said he was ready to lie down in front of bulldozers to stop the expansion of Heathrow airport:

Boris Johnson speaking after his election: "I will lie down with you in front of those bulldozers and stop the construction of that third runway." pic.twitter.com/6Pzvjfwehf

But in June 2018, when parliament voted on the expansion of Heathrow, then-foreign secretary Johnson went to Afghanistan instead and missed the vote. So it seems unlikely that he’s going to be lying down in front of a bulldozer anytime soon. Lying in front of a bulldozer, though – now that’s something he’s rather good at.