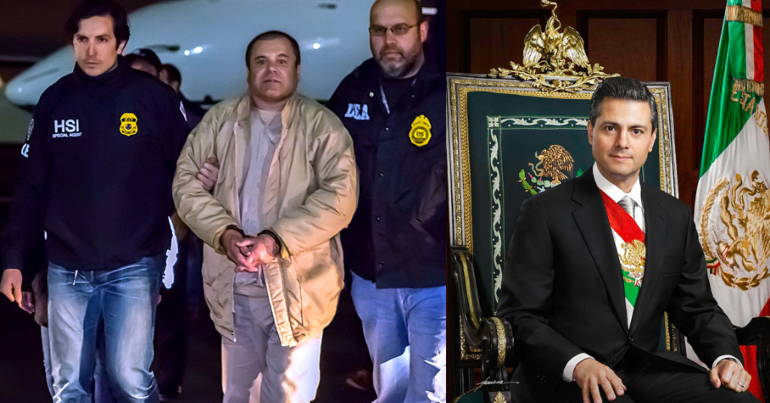 A former Mexican president has just been accused of receiving a bribe from a drug cartel leader. But while the US has used the ‘narco-state‘ charge to attack regional enemies like Venezuela, its silence over Mexico highlights its flagrant hypocrisy and self-interest.

On 14 January, Alex Cifuentes testified during the trial of his former partner in crime Joaquín ‘El Chapo‘ Guzmán. And he claimed that former Mexican president Enrique Peña Nieto accepted a $100m bribe from Guzmán.

Cifuentes was a close associate of the Sinaloa cartel boss, but agreed to provide state evidence against him in exchange for lenient sentencing.

Mexico extradited Guzmán after pressure from US authorities. They claimed he was the leader of the single largest supplier of drugs into US territory. A trial then began in New York on charges of trafficking heroin, cocaine and other illegal drugs.

The accusations currently remain unproven. And Peña Nieto has denied them. But they add to a growing sense that Mexico has degenerated into a narco-state. Investigative journalist Anabel Hernández, for example, has long argued that state-cartel collusion and bribery goes all the way to the top.

Yet the US hasn’t issued sanctions or any punitive measure against Mexico. Rather, it has been generously funding its drug war operations. The vast majority of the millions of dollars in aid, formalized by the Mérida Initiative, goes to funding Mexican military and state security forces. This is in spite of the fact that they have allegedly been responsible for countless human rights violations, including extrajudicial killings.

More hypocrisy – re Venezuela and Colombia

Meanwhile, Washington accuses Venezuela of being a narco-state. And it bases its sanctions against government officials on accusations of involvement in drug trafficking.

Yet the US government’s own intelligence documents accuse former Colombian president Álvaro Uribe – a close US ally – of long-time involvement with drug-trafficking organizations. A declassified 1991 intelligence report from Colombia-based U.S. Defense Intelligence Agency (DIA) officials described Uribe as a “close personal friend of Pablo Escobar” who was “dedicated to collaboration with the Medellín [drug] cartel at high government levels.” According to another declassified intelligence report, in 1993 a Colombian senator told the US Embassy in Bogota that the Medellín cartel had financed Uribe’s election campaign.

There have been no punitive US measures against Colombia. In fact, just like in Mexico, the US has long funded its ‘counter-insurgency’ campaigns. Allied right-wing paramilitaries, meanwhile, have frequently committed massacres and pushed people off their land. This has left Colombia with one of the largest internally displaced populations in the world. The ‘parapolitics‘ scandal led to the conviction of five governors and 32 congress members, including Uribe’s cousin, for collusion. And according to Prof John Barry, these right-wing paramilitaries have historically been the biggest players in drug trafficking in Colombia.

As Noam Chomsky and others stressed in an open letter in 2018:

Venezuela, unlike Mexico, Honduras, Colombia, Egypt, or Saudi Arabia, is targeted for regime change by the US precisely because of Venezuela’s leadership in resisting US hegemony and the imposition of the neoliberal model in Latin America. And of course, Venezuela holds the largest oil reserves in the world, attracting more unwanted attention from Washington.

US hypocrisy doesn’t stop there, either

The US state apparatus has itself turned a blind eye to, or even facilitated, drug trafficking. Investigative journalist Gary Webb’s 1998 book Dark Alliance, for example, exposed the CIA’s support for drug smuggling Nicaraguan Contras. The latter were a ruthlessly murderous paramilitary force. And their drug money helped to finance their war against the country’s Sandinista government.

While the US uses the drug issue as a cynical ruse in its propaganda war against unfriendly governments, it arms brutal narco-states to the teeth. As long as a country is loyal to Washington’s interests, it seems there’s nothing it won’t overlook.

The world must wake up to US hypocrisy. Because for many decades, the superpower has left a trail of blood and destruction across Latin America. And that must stop.