Mexico's new president set to pivot away from drug war, but Trump may stand in the way - Canary 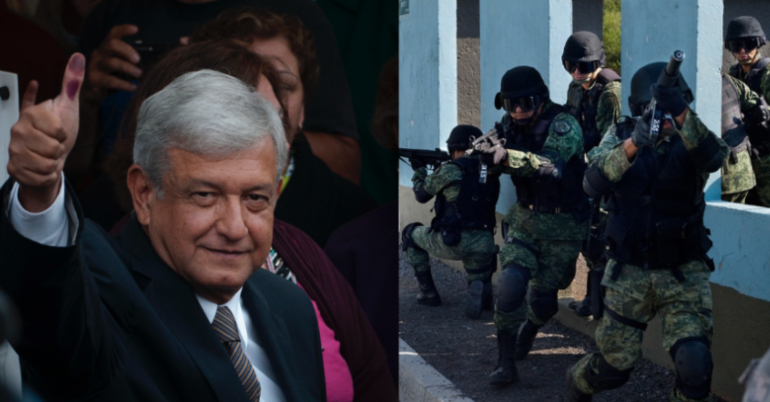 Mexico’s newly elected president, Andrés Manuel López Obrador (aka ‘AMLO’), has some bold new ideas for bringing Mexico’s spiralling violence under control. Recently, he proposed refunnelling US aid earmarked for state security forces into more benign projects. But his proposals might result in a rocky relationship with his country’s northern neighbor.

From quiet to chaotic

Beginning in the early 2000s, Mexico went from a relatively peaceful Latin American country to being one of the most violent places in the world. A report by the International Institute for Strategic Studies found that Mexico’s homicide rate in 2016 exceeded that of all but one of the countries officially considered to be in a situation of armed conflict. And things have only got worse since then. 2017 was Mexico’s deadliest year on record; and 2018 is already surpassing that, with May 2018 recorded as the bloodiest month in the country’s entire history.

The cause of the huge surge in violence, which started around the turn of the millennium, has been overwhelmingly drug war-related. A major factor was the victory of Vicente Fox of the National Action Party (PAN) in the 2000 presidential elections, which broke the decades-long one-party rule of the Institutional Revolutionary Party (PRI). Though PRI domination had serious problems, it did contain the violence stemming from the country’s lucrative drug economy and check the power of its drug trafficking organizations. When the PRI’s 70 years in power came to an end, however, there was a breakdown in the unofficial pacts between PRI officials and cartel leaders that had been negotiated to keep the violence at bay.

The cartels have become increasingly violent and out of control ever since, engaging in bloody battles amongst each other and against state forces. However, a huge amount of the violence has also been caused by the state security forces themselves.

Much of the funding that Mexico has received to wage the drug war has come from the US; in particular through the now infamous Merida Initiative. The treaty, which was signed between then-Mexican President Felipe Calderón and then-US President George W. Bush in 2007, has since provided Mexico with close to $3bn in counter-narcotics funding. The vast majority of this has gone to arming and training Mexico’s security forces.

Rather than reducing the violence (as it was claimed would happen), the introduction of the Merida Initiative has gone side-by-side with an escalating human rights nightmare across the country. Since the treaty’s implementation, security forces have been responsible for countless human rights violations, including extrajudicial killings and torture. Worse still, there is evidence that some of their members have been colluding with the cartels and even acting under their command.

AMLO pledged during his presidential campaign that he would rethink drug war policies and introduce bold new measures to help stem the violence. And on 3 August, one of his aides announced that he was going to rethink drug war funding, and in particular the Merida Initiative.

There are now signs that AMLO might redirect drug war funds toward social and economic development. That’s his preferred approach to handling issues such as drug trafficking and illegal immigration. And this path would address some of the conflict’s causes, such as the poverty and social exclusion that leads many to drug trafficking in the first place.

This move could also lead to even bolder action. For example, during the presidential campaign, AMLO pledged to enter into dialogue with the cartels to see if there could be a negotiated de-escalation of violence. He also stated during his campaign:

we will talk about granting amnesty so long as the victims and their families are willing… We’ll propose it. I’m analyzing it. What I can say is that we will leave no issue without discussion if it has to do with peace and tranquility.

AMLO seems willing to think (and say) what was previously unthinkable in order to break Mexico’s drug war deadlock. But he’s not alone in favoring a new strategy.

The son of Mexican poet, essayist, journalist and peace activist Javier Sicilia was amongst the tens of thousands of drug war victims. And Sicilia said in 2011:

Drug trafficking goes on. The United States doesn’t care and is not helping us at all… The mafias are here. We should make a pact [with them].

In a CNN article published in 2012, meanwhile, Sicilia wrote:

Declaring a war obliges one’s enemy to build up defensive armies. And if the principal tactic of that war is identifying and taking out crime syndicate leaders, it leaves their decapitated, but ever profitable, organizations adrift. President Calderón [2006-2012] went on the offensive against cartel “capos.” The result was a proliferation of criminal gangs…

The path of peace must be taken by both our nations in concert. We know that President Calderón would not have declared his war without U.S. sponsorship, money and military advice.

He also called for a bilateral US-Mexican agenda to decriminalize illegal drugs, which would treat drug use as “a question of public health rather than a matter of national security.”

Support for a change in strategy has even come from some sectors of the right. Former President Vicente Fox, for example, oversaw the initial escalation of the drug war. But he has been calling for the government to enter into negotiations with the cartels for almost a decade. And he has gone so far as to call for the legalization of drugs.

I am going to tell you something that I will get a lot of criticism for… But I would sit down to negotiate, to look for solutions with these cartels and these [criminal] types to see how we could reach an agreement so that they can stop killing one another and stop killing our youth.

Trump: a barrier to progress?

Unfortunately, however, US President Donald Trump previously indicated to AMLO’s predecessor – Enrique Peña Nieto – that he supports continuing, and even escalating, the warpath. The Progressive magazine reported in April that Trump has argued that, “U.S. military forces should get more directly involved.” According to a leaked transcript, Trump reportedly said to Peña Nieto:

You have some pretty tough hombres [in the cartels] in Mexico that you may need help with, and we are willing to help you with that big-league… Listen, I know how tough these guys [in the cartels] are… Our military will knock them out like you never thought of.

US funding of Mexico’s security forces has undoubtedly been a major factor in the escalation of violence. But it seems that Trump is unlikely to take this reality on board. Either he doesn’t understand this or he doesn’t care.

AMLO must hold steadfast to his principles and openly defy the Trump administration if need be. Because the US has consistently stood in the way of better policy; and a diplomatic rift might well be a price worth paying to bring Mexico’s drug war to an end.

– Take action to end the War on Drugs with Drug Policy Alliance.

– Join the Stop the Violence in Mexico Campaign! of the Latin America Working Group.

– Follow the Washington Office on Latin America‘s coverage of the drug war.