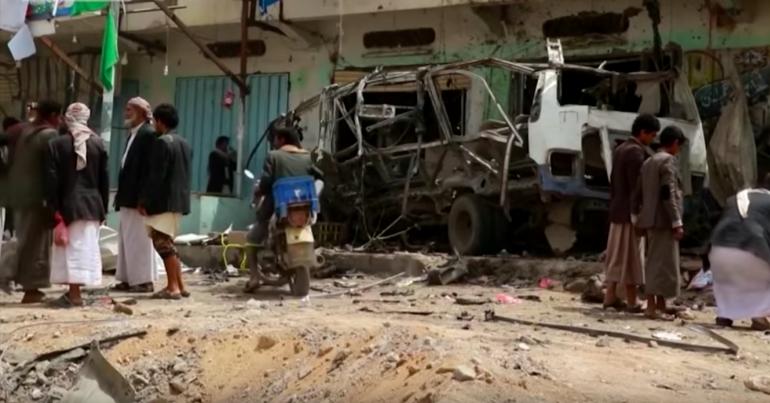 At least 29 children were killed in Yemen as the UK-backed Saudi-led coalition bombed a bus returning from a picnic.

As people continued to digest the horrific news of Saudi-led bombing runs in Yemen, the Ministry of Defence (MoD) sent out a tasteless tweet celebrating UK ‘defence’ sales around the world.

News of the Saudi airstrike on the northern Yemeni province Saada broke on 9 August. And the atrocity has led to renewed calls for the UK to halt arms sales to the Gulf state.

But just one day later, on 10 August, the MoD chose to celebrate an article showing the increase in arms sales from the UK:

Today’s defence-related news includes coverage of a significant increase in British sales of defence equipment around the world https://t.co/rXpNqEVF5v pic.twitter.com/O3Vdf6OOcb

The tweet linked to a webpage promoting an article in the Telegraph showing a 53% increase in UK arms exports, bringing the total to £9bn in 2017. The figures came from the government’s Defence and Security Organisation. But the Telegraph article omitted to name Saudi Arabia as a factor in this increase.

The tweet from the MoD received criticism immediately, with journalist Mark Curtis highlighting the reality behind the figures:

The Ministry of Defence is celebrating more UK arms exports as key recipients, like Saudi Arabia and Israel, kill dozens of people. https://t.co/93QMfu39UR

Since the Saudi-led coalition commenced bombing Yemen in 2015, the UK has licensed at least £4.7 billion worth of arms to Saudi Arabia. According to Campaign Against the Arms Trade (CAAT), this has included:

Andrew Smith of CAAT claimed that the UK has been “utterly complicit” in the Yemen attacks. He said:

Those responsible must be held fully accountable. Thousands of people have been killed in this terrible war, and many more will be as long as the bombardment continues.

The UK government has been utterly complicit in the destruction. It has armed and supported the Saudi-led coalition right from the start. The death toll has spiralled, and the humanitarian crisis has only got worse, and yet the arms sales have continued.

Reaction and calls to halt sales

There was widespread condemnation of the Saudi-led attacks on social media. Especially the UK’s complicity in them:

They are incompetent.
OR
The Saudis are deliberately targeting civilians in #Yemen.

Either way, this training should stop immediate. #StopArmingSaudihttps://t.co/aQkgP2sHjI

Despite the growing pressure, some sections of the UK’s political sphere have stayed silent. But many continued to get the message across:

If the bombing of a bus full of schoolchildren in Yemen disgusts you, but you continue to vote for "moderate" MPs who support selling UK weapons to Saudi Arabia, you have no right to be disgusted. You're complicit in the worst man-made humanitarian crisis of our time. #VoteCorbyn

The tweet from the MoD shows a real disregard towards the children and civilians killed this week. With atrocities being perpetrated by UK backed regimes, it is surely crucial to have an honest and frank debate about the UK’s role in global conflict.