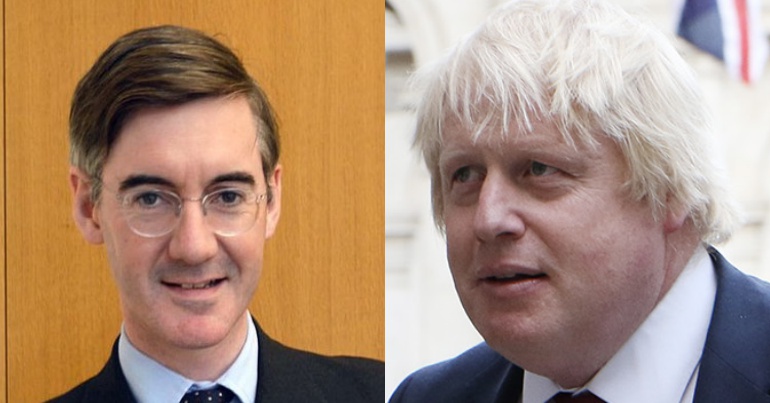 In an article for the Telegraph on 11 August, Jacob Rees-Mogg said he agrees “entirely” with Boris Johnson’s racist comments about burqa-wearing Muslim women. The former foreign secretary said that women wearing burqas or niqabs as look like “letter boxes” or “bank robbers”.

Some Conservatives – including PM Theresa May and Baroness Sayeeda Warsi – called on Johnson to apologise for his comments. An internal party investigation will examine the Islamophobic content of his remarks. But now Ress-Mogg has added new insult to existing injury.

According to Rees-Mogg, attacking Johnson only “helps the opposition”:

Ress-Mogg said that Johnson only:

went beyond the limits of intolerant liberals and criticised the appearance of the burka. He denied that it adds to the wearer’s pulchritude and did so in a typically forthright way.

But Rees-Mogg also used his diatribe to resurface some equally disgusting comments made by other Tories. He referenced Kenneth Clarke who called the burqa “peculiar” and a ‘kind of bag'”. Apparently:

At the time, this would have been the collective view of the government.

And he also dismissed the “howls of outrage” because Johnson was only saying “something that had been said before” and that no one had objected to. According to Rees-Mogg, it’s “absurd” to call Johnson’s comments “either victimising or harassing”.

The Muslim Council of Great Britain (MCGB) said Johnson’s “words have had a negative and potentially dangerous effect on Muslim women and Muslims generally”. It also reported:

On LBC radio, a Muslim woman recounted her experience of being abused on the street and mocked by being compared to a letterbox. A Muslim woman and her children were abused outside a medical centre. Another Muslim woman was called a “f***ing letterbox” by a lady in Parsons Green. Two pensioners began to loudly mock the niqab as they watched a BBC News interview in the waiting area in front of a Muslim woman wearing the hijab.

I've just seen a Burka wearing Muslim lady with her kids being abused outside the medical centre, youths were shoving envelopes in her face, and her kids were crying. Police had to be called. This is your doing #BorisJohnson and Rowan Atkinson thinks what you said is funny. 😡

A young mum boarded a bus with her two month old baby – and the bus driver demanded she remove the veil and insinuated she could "bomb the bus". This is the sort of hatred that the likes of Boris Johnson are legitimising. https://t.co/X613l1BDcq

Me & mum
One day she was walking to our local shop when 3 men URINATED on her
She has a crutch
She froze
She was thankful that they only urinated on her
She said ‘Fatiha,the urine can b washed out so plze dont worry’ as we hugged each other & cried #borisjohnson#islamophobia pic.twitter.com/qjwkcEnZ71

Rees-Mogg’s comments only add to concerns about Islamophobia in the Conservative Party and its persistent failure to take action.

MCGB has repeatedly called for an investigation into Islamophobia among Conservatives. Warsi, former Conservative co-chair told Business Insider that Islamophobia is “very widespread” in the party and that:

It exists right from the grassroots, all the way up to the top.

A recent report from Vice also revealed that Islamophobic comments are rife on the Conservative Home website:

comments… compared the burka to ‘SS uniforms’ and talked of the need to discuss ‘how to eradicate the cancer’ of ‘Islam and Middle Eastern cultures’.

Rees-Moggs comments are utterly indefensible. Although as campaigner and lawyer Peter Stefanovic pointed out, that’s not really a surprise:

What would you expect from Jacob Rees-Mogg, the man who described the disgraceful & abominable go-home vans that Theresa May introduced as Home Secretary as “a lapse of good taste!” https://t.co/9QtIeqH7zf

Rees-Mogg’s ludicrous defence is that he was preventing a “show trial” of Johnson. But both these Tories have actually perpetuated foul and vile racist commentary.

Both Johnson and Rees-Mogg are a disgrace and they need to go: now.

Featured images via LadyGeekTV/Wikimedia and Foreign and Commonwealth Office/Wikimedia