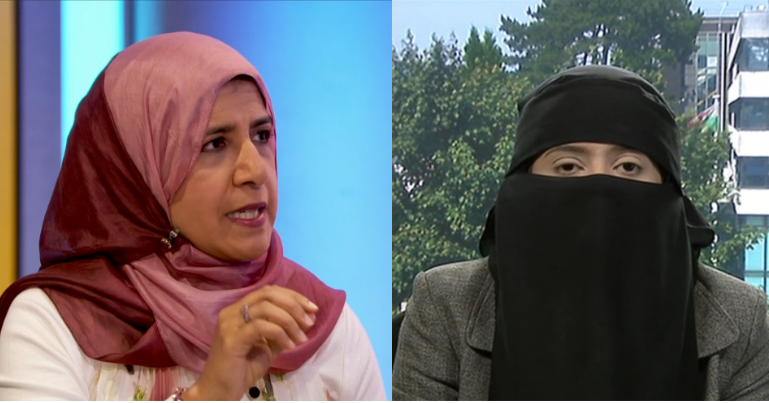 Controversy is still surrounding Boris Johnson over his comments on Muslim women wearing the burka or niqab. On 5 August, he claimed in a Telegraph column [paywall] that women wearing the niqab look like “letter boxes” and a “bank robber”.

But the latest response to his comments has seen him slammed by two Muslim women in a BBC debate.

Speaking as part of an “Is Islamophobia on the rise?” debate on the BBC’s Sunday Morning Live, Sahar Al-Faifi and Shelina Janmohamed laid into Johnson. Al-Faifi is a regional manager for Muslim Engagement and Development, and assistant general secretary for the Muslim Council of Wales. Janmohamed is a writer and author of Love in a Headscarf.

It’s very sad to hear these comments. They are clearly Islamophobic and racist. And let’s not forget that Boris Johnson is not a nightclub comedian. He is a member of the parliament. His comments will have consequences on us, on our daily life.

There definitely will be a spike, an increase in Islamophobic abuse and his comments does not help.

This perspective was also echoed by Janmohamed:

When we have a leading figure, a member of parliament, who is using his platform, who has ambitions to run our country, then it’s not just about the words he uses, it’s the fact that there is a context. This is a far right meme – the ‘letter box’ – that has been amplified by somebody whose job it is to bring us all together.

Islamophobia on the rise

During the discussion, Al-Faifi was explicitly asked if Islamophobia is becoming more prevalent. Her response was clear:

Definitely. Without a doubt. I mean, it’s been really difficult in the, you know, last year and a half since Brexit already. You know, one of the examples, it was just last week, in the area where I live, someone called me an “ugly terrorist”. You know, before that in the hospital where I work, you know, people calling me “go back to your f***ing country”.

Janmohamed went further earlier in the programme. She directly linked the words used by Johnson to Islamophobic attacks:

This is actually about the fact that we have now come to a time where it’s okay to hate on a minority, and use comments that have specifically, specifically led to women being abused on the streets.

There is a case of a woman in a doctor’s surgery who has had envelopes stuffed into her mouth. A mother who has gone on a bus and been refused to get on. A woman who has walked down the street and been urinated on.

This isn’t the first time that Johnson has caused outrage over his remarks. Earlier in the year, Nicola Sturgeon accused him of being “one of the least fit people to hold a high office of state that we’ve ever seen” after comments he made about Donald Trump and Brexit.

Also appearing on the Sunday Morning Live discussion, Owen Jones called Johnson out for a long string of offensive comments:

Jones went on to discuss the wider context of Islamophobia in the media, society and politics:

Both the media and politicians are whipping up hatred against Muslims – and non-Muslims need to speak out. pic.twitter.com/MMm3E5YrPH

Other commentators have criticised the entire way in which the “debate” on Johnson’s comments has been framed. On 8 August, The Canary‘s Afroze Zaidi-Jivraj argued:

In reality, the only reason white men are so keen to debate the burqa or niqab is so that they can impose their views on Muslim women. Men wanting to exercise their authority and control over women by policing how they dress is nothing new. White men in power publicly describing Muslim women as “bank robbers” and “letter boxes” is both misogynistic and racist.

More and more people are calling out Boris Johnson. And with even senior Conservatives now condemning him, it looks like his power and influence is in rapid decline.