In one statement, Trump clumsily sums up decades of empty US posturing on human rights - The Canary 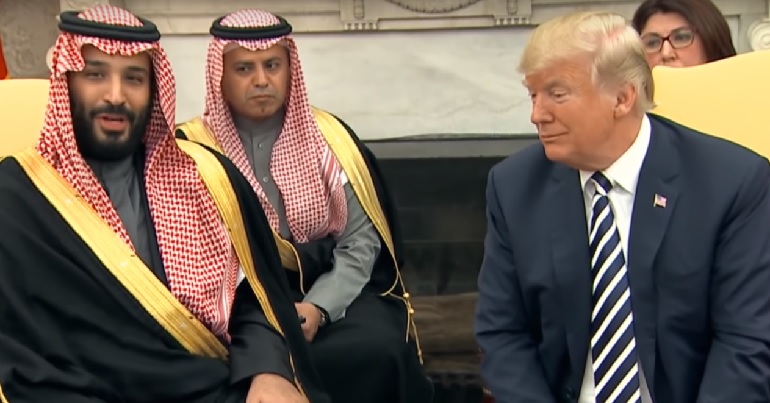 In a 20 November statement that began by shouting “America First!“, Donald Trump basically lifted the veil on decades of phony US concern about human rights around the world.

In what read like a propaganda statement right out of Riyadh (or Israel), Trump insisted:

And after rambling on about how Iran was apparently to blame for the destructive actions of the Saudi dictatorship in Yemen, Trump stressed:

last year, the Kingdom agreed to spend and invest $450 billion in the United States. This is a record amount of money… Of the $450 billion, $110 billion will be spent on the purchase of military equipment from Boeing, Lockheed Martin, Raytheon and many other great U.S. defense contractors.

In short, the US would be “pursuing its national interests”. Forget that the Saudis are currently decimating Yemen, causing the world’s worst humanitarian crisis and leading it towards the Earth’s worst famine in a hundred years. Don’t worry about their key role in the destructive escalation of the Syrian conflict. Ignore their human rights abuses and links to terrorism. And take no notice of the recent murder of a Saudi journalist – possibly on the orders of Saudi crown prince Mohammed bin Salman. Because there are billions of dollars in arms sales on the line and, you know, Iran. (For the record, the US once killed 290 civilians – including 66 children – in just one attack on Iran, which appears to be roughly 290 more than the number of US civilians that Iran has ever killed.)

Mainstream media outlets pointed out the inaccuracies in Trump’s Saudi “love letter“. And they called it “extraordinary”, with the New York Times labelling it “remorselessly transactional” and “founded on a theory of moral equivalence”. But in reality, there was little extraordinary about it. Because it simply summed up how US foreign policy works, exposing elite self-interest in all its ugly glory where previous presidents would try to conceal it.

A long, bloody list of double standards and empty posturing on human rights

And it also includes:

In fact, most of the world’s worst countries for workers’ rights are US allies.

Washington’s ugly secrets out in the open

When it comes to foreign policy, Trump isn’t exceptional in US history. He just walks around naked where other presidents would dress up in their Sunday best to hide the ugliness beneath. And that’s a good thing; because the more global citizens wake up to just how hypocritical and profit-centred US foreign policy is, and how little it truly cares about human rights, the less likely they are to fall for its lies in the future.