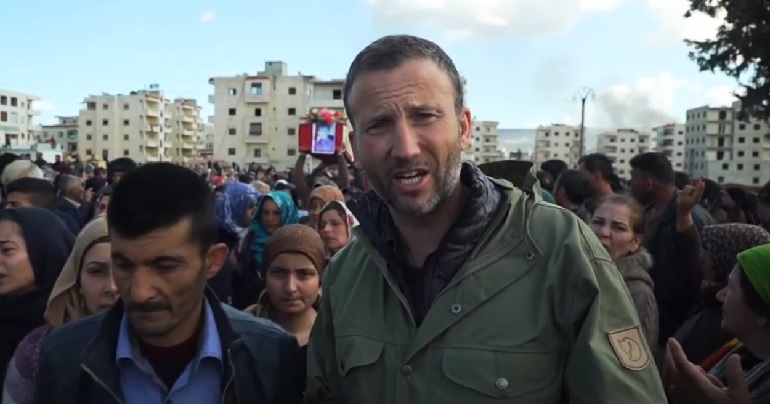 Turkey stands accused of “ethnic cleansing” in northern Syria. And after weeks of poor reporting from mainstream media outlets, even Sky is now repeating these accusations.

Turkey has the second-largest army in NATO. And for over 50 days, it has been attacking the Kurdish-held Syrian region of Afrin. The local Kurdish health authority reports that the assault has so far killed 220 people and injured 600.

Award-winning journalist Patrick Cockburn has slammed media reports of the invasion, saying that “there is no shortage of film of the suffering of civilians” in Afrin, but that:

because these events are happening in Afrin and not in Eastern Ghouta… they are almost entirely ignored by both media and foreign politicians.

He also criticised in general “the unbalanced way in which the Syrian war has been reported by the media”.

And currently, he insisted:

Syrian Arab militiamen leading the Turkish attack on Afrin… are threatening to massacre its Kurdish population unless they convert to the variant of Islam espoused by Isis and al-Qaeda. In the past such demands have preceded the mass killings of sectarian and ethnic minorities in both Syria and Iraq.

Afrin city is now surrounded. The UN believes 323,000 people are trapped there. Kurdish leaders claim the figure is closer to a million.

But now, even the international media outlets Cockburn criticised are highlighting concerns about ethnic cleansing.

Here is the full video of the report by @alexrossiSKY pic.twitter.com/rf4sHuj7VA

the mourners accuse Turkey of carrying out ethnic cleansing. Whilst the world is focused on Eastern Ghouta, Syria’s Kurds claim a massacre is taking place, but this time in Afrin…

The Syrian Kurds of the YPG were the West’s most reliable partner in the fight against the Islamic State [Daesh]. But now… they feel abandoned…

As the video states, Turkey’s aim is reportedly to ‘protect its borders’ and defeat the People’s Protection Units (YPG). But the YPG has received the open backing of the US and UK in the fight against Daesh (Isis/Isil) since late 2014. And only months ago, it defeated Daesh in its de facto Syrian capital of Raqqa. Both US and Kurdish officials, meanwhile, insisted at the start of the Turkish invasion that there was no evidence that the YPG had attacked Turkey. In fact, Afrin was one of the calmest areas in Syria before Turkey’s attacks, hosting tens of thousands of refugees with little international support.

Where is the West?

History's repeating itself: Kurds, Christians, Yezidis and others are fleeing for their lives from Afrin. Where is the international community? ☞ #SaveAfrin #DrWidad pic.twitter.com/filamr8p9K

There have now been numerous protests in solidarity with Afrin, from Paris to Düsseldorf, Stockholm to London, and Helsinki to Brussels. And politicians are also speaking out.

Horrendous scenes of barbarism and the slaughter of innocent civilians in Afrin. Erdogan is no ally of ours he is a tyrant and a despot. @BorisJohnson must condemn this atrocity and call on Erdogan to cease his attack on the Kurds. #DefendAfrin https://t.co/kiLhO0DYek

Theresa May's support for Saudis and Turkey makes the world a more dangerous place.The Wahhabist ideology of Saudi Arabia inspires #ISIS, the Turkish invasion and assault on #Afrin is giving #ISIS the opportunity to regroup. Her foreign policy is a catastrophe for British people pic.twitter.com/pqvfRyehw4

Approach to Kurds is 'thanks for fighting #ISIS but now can you die quietly instead of protesting and causing we British people inconvenience'. #KingsCross #manchesterpicadilly #Afrin pic.twitter.com/LzggRuUUjd

But since the invasion began, UK foreign secretary Boris Johnson has mentioned Syria numerous times on Twitter and Afrin only once, saying:

Watching developments in Afrin closely. Turkey is right to want to keep its borders secure. We share goal of reducing violence and keeping focus on most important task: a political process in Syria that leads to the end of the Asad regime.

As long as Turkey is a NATO ally, and as long as our governments sell it arms, we must all demand action from our politicians. Inaction is unacceptable. Resistance is a duty.