I’m sorry your train was delayed. But people are dying and no one is listening. - Canary 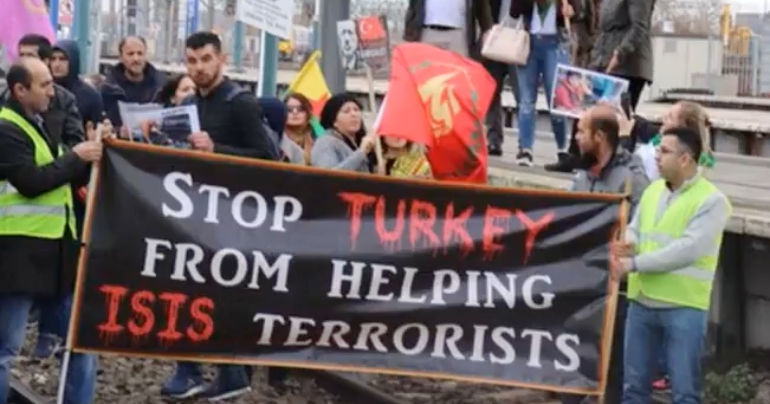 On 11 March, Kurdish protesters occupied Manchester Piccadilly and London’s Kings Cross train stations to highlight government and media silence over the Turkish invasion of Afrin in Syria. Protesters climbed onto the tracks and trains were disrupted and delayed.

Many passengers took to Twitter to complain. Some said they didn’t know what the protest was about; others complained they couldn’t get home on Mother’s Day; and further people couldn’t see the connection between the protest and the situation in Afrin.

I really am sorry if your train was delayed. This isn’t sarcasm – and it’s why I’m not going to embed any tweets into this article. This isn’t about making people feel bad for complaining. But it is about showing why the protesters were right and why this action was necessary.

For the last 52 days, Turkey has attacked the Kurdish-held Syrian region of Afrin. For 52 days, shells have rained on houses, and areas are under siege. The local Kurdish health authority reports that 220 have been killed and 600 injured. According to The Independent:

There are many such videos and still photographs from Afrin taken by Kurds and members of the Turkish forces showing the shelling and bombing of houses, the mangled bodies of children killed by the explosions and others of Kurdish civilians being herded away.

And things will get worse. Afrin city is surrounded by Turkish forces. Water is cut off and internet connections have been lost. It is unknown how many people are trapped in Afrin. The UN believes 323,000 people are there. But Kurdish leaders claim the figure is closer to a million.

Turkish President Recep Tayyip Erdoğan insists that he is launching the attack to defeat the People’s Protection Units (YPG); the very people who the US and the UK have openly backed in the fight against Daesh (Isis/Isil), and who only months ago defeated Daesh in its Syrian capital of Raqqa. Yes, the people who put their lives on the line to liberate Syrian towns and villages from Daesh are now under attack from NATO‘s second-largest army.

The silence from the UK government is deafeningly deadly. Foreign secretary Boris Johnson stated on 22 January:

We understand that the Kurds have been instrumental in taking the fight to Daesh, and everybody appreciates that. On the other hand, Turkey does have a legitimate interest in protecting its own border.

Both US and Kurdish officials insisted at the start of the Turkish invasion that there was no evidence that the YPG had attacked Turkey. And Afrin was actually one of the calmest areas in Syria until Turkey decided to increase its attacks, hosting tens of thousands of refugees with little international support.

But the UK government’s attitude is unsurprising. The Conservatives seem more concerned with selling weapons to Turkey than protecting Kurdish communities. In May 2017, Theresa May negotiated a £100m deal to help Erdoğan develop fighter jets and improve trade relations.

Meanwhile, Erdoğan stands accused of being a war criminal and committing systematic human rights abuses, including arresting the head of Amnesty International Turkey.

And it’s not just the British government that’s been silent over Afrin. While the media has covered the situation, it hasn’t often been headline news. You’d either have to be a bit of news junkie or particularly interested to follow the situation.

This is why the protests were necessary. Disrupting train services made an impact. It made people listen. It made headline news. Yes, Kurdish communities and their allies could have marched through the town centres. But they’ve done this on numerous occasions. Nobody listens. Nobody cares. And it certainly doesn’t get national news coverage.

So I’m sorry if you didn’t have the Mother’s Day you were intending because you couldn’t get home in time. But as a mother, I’m just grateful that my son and I live in a place where we’re both alive and not being bombed.

I’m sorry that it takes actions like this to get anyone to sit up and notice what’s happening. But the unfortunate reality is that this is what it took to get the situation in Afrin plastered across the media.

So yes, I am sorry that your train was delayed. But people are dying. And no one was listening.

– Support the Kurdistan Solidarity Campaign and attend one of the emergency protests.