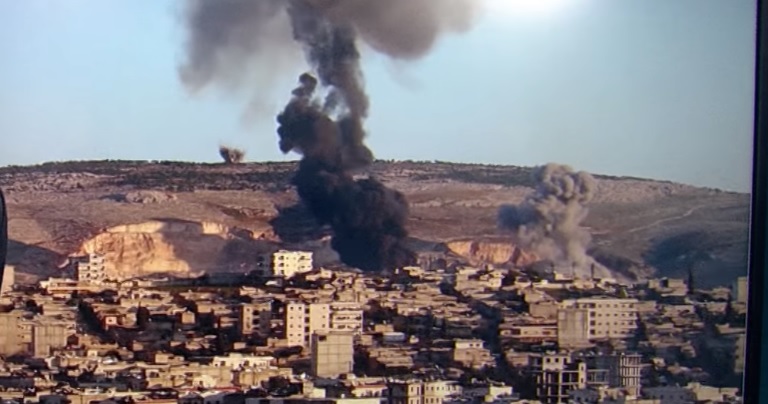 On 19 January, NATO’s second-largest army (Turkey) began to attack cities, towns and villages in northern Syria. This assault has reportedly killed over 100 civilians so far. But in the mainstream media, there has been little resistance. And together with an entirely insufficient response from NATO allies, this is allowing Turkish-led forces to get away with what one MP has described as “ethnic cleansing”.

A “fascist state” and its campaign of “ethnic cleansing”

In a press release on 22 February, South Down MP Chris Hazzard spoke about the Turkish attack on Afrin in northern Syria. He said:

The Turkish government has been escalating its policies of repression inside and outside the fascist state day by day… What President Erdogan is trying to accomplish in Afrin is nothing short of ethnic cleansing. However the EU, the UN, and most of the western world have so far failed to take clear measures to stop Turkey’s attack on Afrin which is breaking international and humanitarian law.

More than 30 schools, health clinics – including the Kurdish Red Crescent Health Centre – mosques, cemeteries and hundreds of residential areas have become the targets of the Turkish artillery in an attack that clearly disregards any notions of international law… Along with direct attacks on civilian settlements various water purification plants, bakeries and market places have been targeted by air-strikes.

The Syrian Observatory for Human Rights believes that the offensive has killed 112 civilians so far. Hazzard suggests the figure could be closer to 200.

Turkey’s targets in northern Syria are the Kurdish-led People’s Protection Units (YPG). These units have been leading the fight against Daesh (Isis/Isil) in Syria for years, while defending a progressive feminist experiment in direct democracy. Even Turkey’s Western allies have seen these forces as some of the most effective anti-Daesh ground forces. In fact, both the UK and the US have given them increasing strategic support in that fight since late 2014.

However, there are some media outlets that brush over those facts in their reporting. And others still have published pieces which essentially amount to Turkish propaganda.

Reporting the words of “Turkish officials” on 22 February, for example, Al Jazeera said:

Afrin was one of the calmest areas in Syria until Turkey decided to increase its attacks. And it hosted tens of thousands of refugees, with little international support.

The Al Jazeera article also failed to give any criticism of Turkey’s “military operation” (a neat way to avoid calling it an invasion). It even did the Turkish officials’ dirty work for them, without a hint of balance. It continued:

Turkey considers the Kurdish Democratic Union Party (PYD) in Syria and its armed wing YPG to be ‘terrorist groups’ with ties to the banned Kurdistan Workers’ Party (PKK).

The PKK has waged a decades-long armed fight against the Turkish state that has killed tens of thousands of people.

What media outlets like Al Jazeera often miss out of their coverage when talking about the PKK or other Kurdish-led political movements is the fact that they did not emerge in a vacuum. As indigenous rights group Cultural Survival points out:

Since World War I, Kurds in Turkey have been the victims of persistent assaults on their ethnic, cultural, religious identity and economic and political status by successive Turkish governments.

(The same was also true in other countries with Kurdish populations, including Syria.)

The PKK only formed in the late 70s, after decades of repression. And it only launched its armed struggle against the Turkish state in 1984, after a 1980 military coup which saw the army detain up to 81,000 Turkish Kurds.

Today, the PKK and its allies condemn all attacks on civilians. And they have never attacked Western targets. In fact, a peace agreement with Turkey looked increasingly possible in recent years; until President Recep Tayyip Erdoğan ended the process in 2015. Erdoğan’s regime has since: forged an alliance with neo-Nazis; turned Turkey into “the world’s biggest prison for the media profession”, according to Reporters Without Borders; organised massacres and destruction in majority-Kurdish cities and towns; arrested democratically elected politicians and thousands of political opponents; helped jihadi groups in Syria; and cracked down on human rights in Turkey.

Judging by Turkey’s recent and historical record, Hazzard may well be right; its current assault on Afrin may indeed be “nothing short of ethnic cleansing”.

But media outlets skirt around this issue. Or they suggest, like Al Jazeera, that the world will somehow be a better place because of Turkey’s invasion. And as long as media outlets keep failing to hold politicians to account, Turkey’s faithful NATO allies – the UK included – will continue to turn a blind eye. The more this happens, the more innocent civilians will suffer.

The need for a mass international response is urgent. And that means holding both politicians and the mainstream media to account. Now.

– Write to Theresa May and your MP. Ask them to urge Turkey to stop its war on Afrin; to resume peace talks with its internal opponents; and to release all political prisoners.

– Read more Canary articles on Turkey and Afrin; and watch our recent interviews with people who have witnessed the current situation in Turkey and northern Syria first hand. Also see more international reporting from us at The Canary Global.