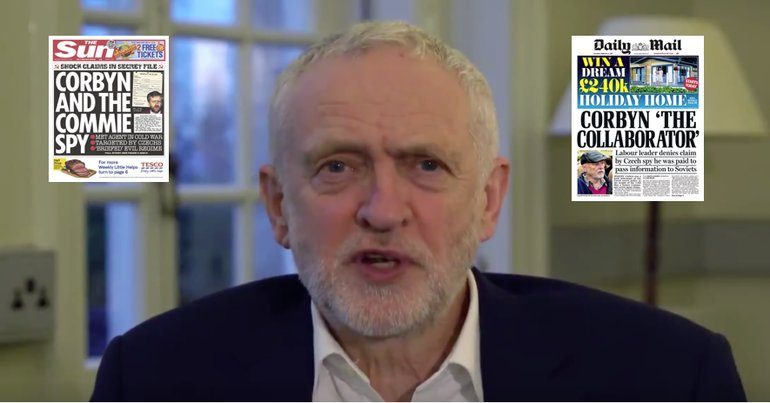 As allegations broke in the Murdoch press that Labour leader Jeremy Corbyn was a Soviet collaborator, one man was ready and waiting in the wings to help keep the story at the top of the news agenda for as long as possible.

The Canary can reveal that this same man worked on similar smear stories in conjunction with a Murdoch-funded bulletin some thirty years back. That bulletin, edited by an ex-MI5 section head, also ran smear stories against a number of Labour MPs, including a former Labour leader. And it was around then that Corbyn was targeted by MI5 and Special Branch.

Paul Staines, aka Guido Fawkes, played a key role in promoting from the outset the fake news story that claimed Corbyn was working for Czechoslovakian intelligence. For the next seven days, Staines’s output on the story was relentless, with more smears published a week after it first broke.

Staines’s involvement in smear campaigns can be traced to the 1980s, when he was an editor of British Briefing, which described itself as a “monthly intelligence analysis of the activities of the extreme left”. This newsletter was also known as World Briefing, and was originally called Background Briefing on Subversion. Its chief editor was Charles Elwell, the former head of MI5’s F Branch, which monitored ‘domestic subversion’.

In 1990, The Observer revealed that Murdoch was funding the publications to the tune of £270,000 – a considerable sum for a mere bulletin. Around the same time, Murdoch was promised an honorary knighthood. But after his role in funding British Briefing was exposed, that never happened.

According to former MI5 staffer Annie Machon, Corbyn and many other Labour MPs were also the target of MI5 surveillance. And former undercover police officer Peter Francis claims Special Branch surveillance of Labour MPs, including Corbyn, continued well into the 1990s.

The latest smear story against Corbyn began with The Sun. It claimed he was a “communist spy”. The Daily Mail dutifully followed up with more claims. And Tory MP Ben Bradley accused Corbyn of passing intelligence to the Czechs. Corbyn immediately issued a claim for libel.

The allegations made by former Czech spy Jan Sarkocy appeared ludicrous. For example, he claimed in a Slovakian tabloid that he was responsible for a concert to support Nelson Mandela (or was that Live Aid?). The claim that he met Corbyn at Westminster in October 1987 was also shown to be false, as Corbyn was in Derbyshire.

German authorities have since confirmed there was no Stasi file held on Corbyn. The head of the Czech Security Forces Archive has said that allegations are untrue. And an analyst with the defence ministry of the Czech Republic agreed, saying that Sarkocy was a liar.

You have to take it not just with a pinch of salt, but a wagonload of salt. It is a classic smear campaign.

Or as journalist Paul Mason succinctly puts it:

Today's right wing media scoops: "that day we said Corbyn met a Czech spy… it was a different day"; "that Stasi file we demanded he open up… it doesn't exist". "Please don't break up our media empires". Er, that's it.

You can argue that the role of the intelligence services is to protect the establishment at all costs. The ‘establishment’ is the Conservative interpretation of capitalism, the political order, and the right-wing media. Labour is tolerated, providing it sticks to a ‘moderate’ agenda. But Corbyn plays by different rules, and that makes him a target.

As such, you should expect more smears against Corbyn. And no doubt seasoned smear-retailer Staines will be involved in them.