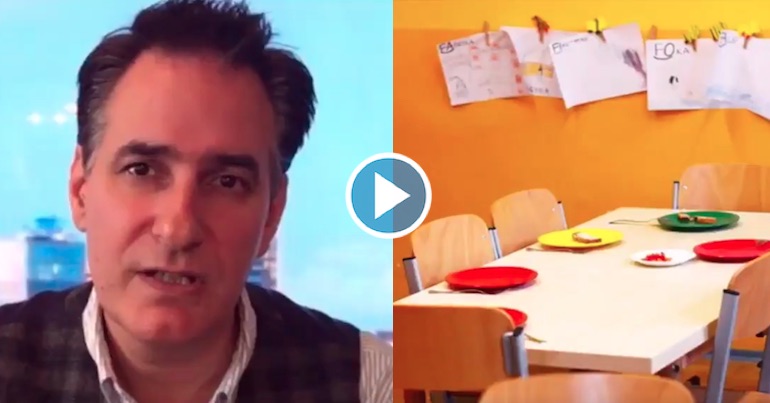 A campaigning lawyer’s latest video issues a damning indictment of Conservative MPs, who just voted to effectively stop free school meals for up to a million children in England. And it serves as a timely reminder that you can never trust a Tory.

Peter Stefanovic is becoming well known on social media for producing video shorts that cut through mainstream media bias. His latest film is no exception.

On Tuesday 13 March, the Labour Party tabled a vote in parliament. It was about an income threshold set in new welfare payment Universal Credit, meaning children aged seven/eight and over will stop getting free school lunches once their parents or guardians earn over £7,400. Labour tried to stop this going through because, as The Canary previously reported, it could see up to a million children eventually lose out. But Labour lost the motion by 312 votes to 254.

Work and pensions secretary Esther McVey accused Labour of ” scaremongering and misinformation”. She reiterated the government line that:

50,000 more children would benefit under our proposals when compared with the previous system.​

But Stefanovic disagrees. He has a stark message for the Conservative MPs “who now deny the consequences of their actions and say they would never… knowingly take a school dinner away from a child”:

That only last year… you all campaigned on a manifesto that actually wanted to take free school meals away from infant kids. You all actively campaigned for that…

Or are you now denying that, too?

Unfortunately for the Conservative Party, it did campaign on exactly this. As its 2017 manifesto clearly states [pdf, p53-54]:

We do not believe that giving school lunches to all children free of charge for the first three years of primary school – regardless of the income of their parents – is a sensible use of public money.

It planned [pdf, p54] to cut funding for free school lunches, and introduce breakfast clubs instead. This was, the Conservative manifesto said [pdf, p54], to make a “saving”. But after the election, the government had to abandon its plans, as it turned out they would cost around £100m a year more than it originally thought.

Pulling the rug out from under the poorest children in society seems to be the Tory way of working – from Margaret Thatcher snatching milk to McVey and free school meals. Very much like the leopard in the proverb, a Conservative never changes its spots.

– Read more articles on Universal Credit from The Canary.