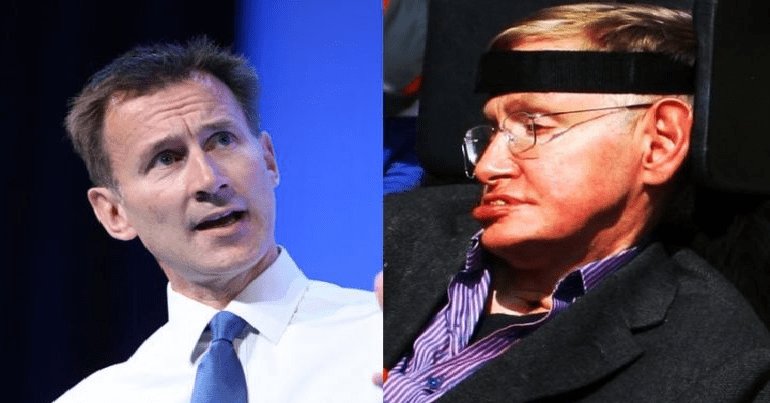 Before Prof Stephen Hawking died, the renowned physicist was preparing to take Health Secretary Jeremy Hunt to court for destroying the NHS. Hawking said the Conservatives’ privatisation agenda amounted to an “attack on the fundamental principles of the NHS”.

Hawking joined JR4NHS – a campaign group made up of concerned healthcare professionals. Together, they were carrying out legal action to stop “the introduction of accountable care organisations (ACOs) without full public consultation and parliamentary approval”.

ACOs originate in the US, and according to campaign group Keep Our NHS Public they will:

Labour’s shadow health secretary Jon Ashworth said ACOs were “potentially the biggest change which will be made to our NHS for a decade”. Still, the Conservative government is pushing ahead without a public consultation. And ACOs are just part of the alphabet soup of new structures the government wants to impose on the NHS.

Hunt loses attempt to stop Hawking and the campaigners

Hawking and the campaigners already won a major victory over Hunt. The Health Secretary and NHS England “fiercely” attempted to price out the campaigners [see ‘Case updates’] from bringing the legal challenge. But on 22 February, the High Court ruled that the costs would be capped. This means that, after a crowdfunding campaign, JR4NHS can have the judicial review into ACOs heard. It’s scheduled for 23 and 24 May.

“Towards a US-style insurance system”

The NHS helped Hawking on a number of occasions and the professor championed the service. Last August, the author of A Brief History of Time warned of the NHS becoming ‘Americanised’:

International comparisons do suggest Hawking is correct. In 2014, the US spent 17.1% of its GDP on healthcare – without providing cover to all Americans. In the same year, the UK spent just 9.1% of its GDP on healthcare, while providing universal cover. The major difference across the Atlantic is that private companies are making huge profits. Whereas if healthcare is public, privateers cannot siphon money out of the service as profits.

The NHS was a service close to Hawking’s heart. Now the legendary scientist is no longer with us, it’s all the more important we fight NHS commercialisation. Otherwise, the Hawkings of the future may fall by the wayside because they cannot afford decent healthcare.