Amid a worsening situation for workers' rights, an international union chief speaks out - Canary 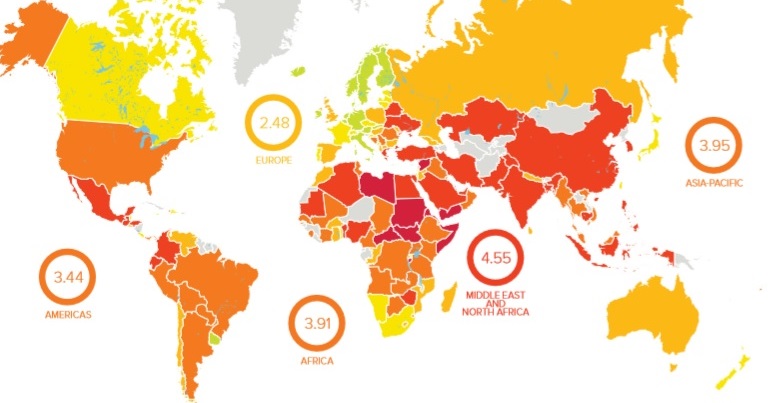 In its 2018 report, the International Trade Union Confederation (ITUC) signalled a worrying trend of deteriorating workers’ rights around the world. So The Canary caught up with ITUC general secretary Sharan Burrow to find out more. And she explained why “it’s time to change the rules”.

What are the biggest challenges facing trade unions around the world today?

Firstly, Burrow spoke about how democratic spaces are shrinking and “unchecked corporate influence” is increasing. In particular, she highlighted a rise in violent attacks against workers, denials of free speech, and violations of the right to strike:

Workers’ rights to form and join trade unions, collectively bargain and take strike action have also deteriorated. In five years, there has been a 41% increase in the number of countries which violate the right to strike – 87 countries to 123 countries, and violations of collective bargaining rights have increased by 32% from 87 countries to 115 countries.

Workers and their unions are the defenders of rights and freedoms and continue to organise to build the power of working people, to stop the violations and to end corporate greed.

Which countries are failing to protect workers’ rights in the most concerning way?

The top offenders that Burrow mentioned included none of the main enemies of Western governments; the regular targets for regime change were nowhere to be seen.

On the contrary, some of the world’s worst offenders are key Western allies – like Saudi Arabia, Turkey, and Colombia. Burrow highlighted in particular the Saudi system of kafala (or ‘sponsorship’), which makes it hard for workers to get away from exploitative employers:

The Middle East and North Africa remains the world’s worst region when it comes to fundamental rights at work. Millions of migrant workers in Saudi Arabia are trapped under the kafala system.

Which countries are protecting workers’ rights most effectively?

There were a few countries, meanwhile, for which Burrow reserved particular praise:

There have been positive legislative developments in Iceland, Canada and New Zealand. Iceland became the first country to take a concrete step to enforce equal pay for women and men. Canada put in place paid domestic violence leave. And New Zealand put in place pay rises for care workers and opened consultations to restore film workers’ employment rights and their ability to collectively bargain.

To give a full impression of the global situation, the ITUC shared the following image alongside its 2018 report: 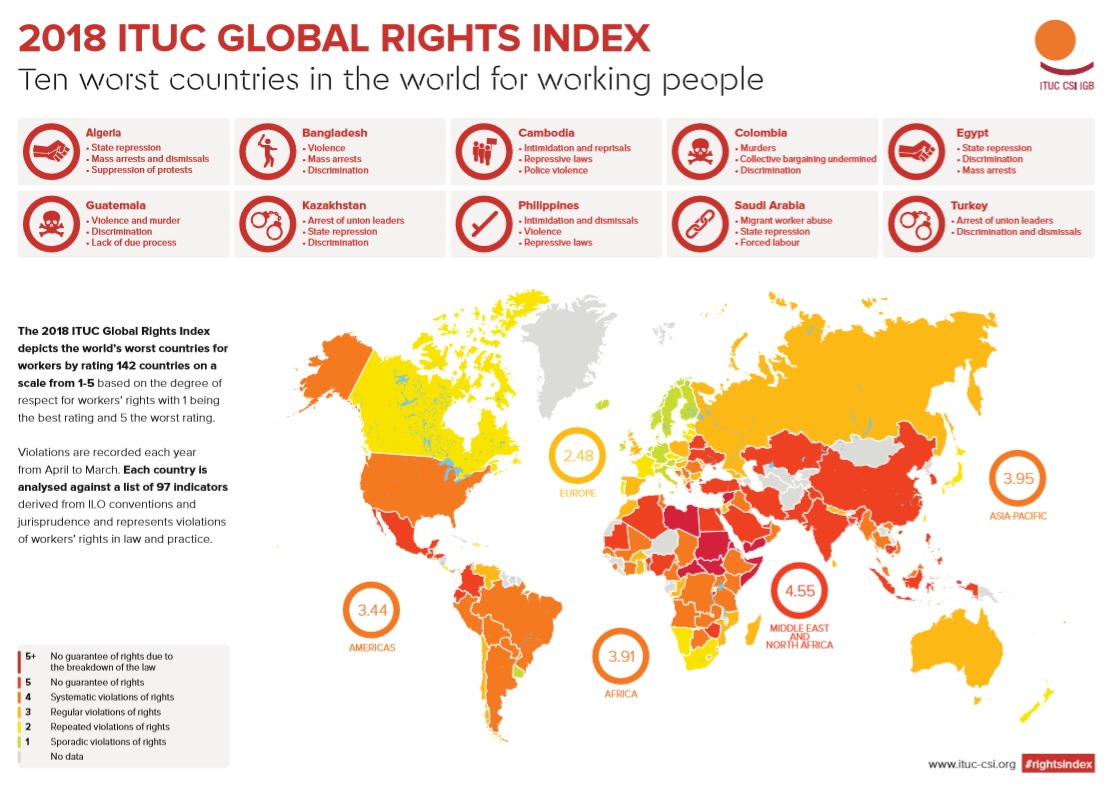 What are the challenges facing UK workers in the run-up to Brexit?

Turning to the UK, Burrow said:

In many countries around the world, workers and their unions face the challenges of not enough decent jobs, low wages and governments which undermine peace and democracy.

In the UK, many British jobs depend on easy trade with EU countries. If trade barriers go up, that puts lots of jobs at risk. And the risk is that it will stop new investment coming to the UK.

In addition, lots of important rights at work come from EU Directives, such as paid holidays, rights for part-time workers, time off for working mums and dads, equal pay for women, and limits on working hours.

The TUC are calling for a common rulebook on workers’ rights, to make sure that our existing rights are protected, and that rights in the UK keep pace with those in the rest of Europe.

And peace is at risk. We know how precious and fragile peace is. The Good Friday Agreement must not be put at risk. The TUC says the government still hasn’t provided any credible proposal on avoiding a hard border. Failing to do so would be catastrophic for communities across Ireland.

How can trade unions and individual citizens most effectively meet today’s challenges, both in the UK and abroad?

Burrow’s message for fighting back against a situation of deteriorating workers’ rights around the world, meanwhile, was simple. She stressed:

The recipe for reducing inequality for working families and ensuring decent work is simple: a minimum wage on which you can live, social protection, and companies paying their fair share of tax. This is what working people demand of their governments. It’s time to change the rules of the global economy and rebuild public trust in government and institutions.

In short, if you’re not already part of an organised workplace, what are you waiting for?

– In the UK, see the Trades Union Congress (TUC) guide to which union is most appropriate for you.

Featured image via ITUC (with permission)