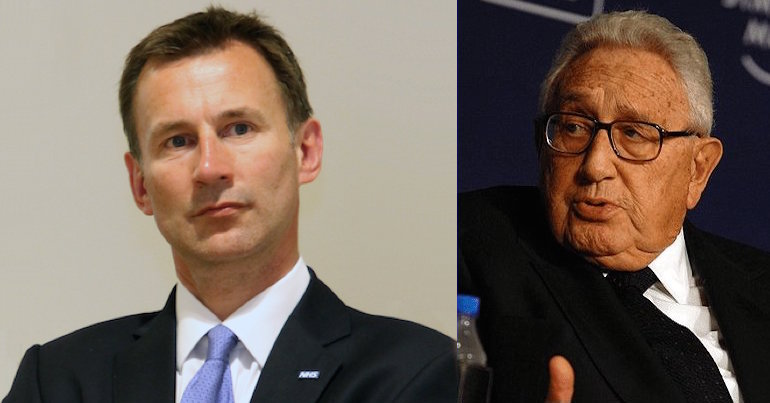 Former US secretary of state Henry Kissinger has been ‘tutoring’ UK foreign secretary Jeremy Hunt. And, despite Kissinger’s links to multiple genocides, Hunt bragged about receiving his guidance in New York:

What an honour to meet Dr Henry Kissinger just now. The world’s most experienced diplomat tutoring the world’s newest. pic.twitter.com/tVzqMWIcTo

Let’s consider some of Kissinger’s achievements during his tenure as Richard Nixon’s top foreign policy–maker. He (1) prolonged the Vietnam War for five pointless years; (2) illegally bombed Cambodia and Laos; (3) goaded Nixon to wiretap staffers and journalists; (4) bore responsibility for three genocides in Cambodia, East Timor, and Bangladesh; (5) urged Nixon to go after Daniel Ellsberg for having released the Pentagon Papers, which set off a chain of events that brought down the Nixon White House; (6) pumped up Pakistan’s ISI, and encouraged it to use political Islam to destabilize Afghanistan; (7) began the U.S.’s arms-for-petrodollars dependency with Saudi Arabia and pre-revolutionary Iran; (8) accelerated needless civil wars in southern Africa that, in the name of supporting white supremacy, left millions dead

This is the man Hunt is looking to for guidance in his role as Britain’s top diplomat.

Our media is a joke

Meanwhile, the corporate media has been hammering Jeremy Corbyn over his alleged associations day in day out.

The Labour leader has reported the entire right-wing media to press regulator IPSO for its fundamentally inaccurate coverage of the Tunis Wreath row. The media has been smearing Corbyn via association with terrorists who weren’t even buried at the cemetery he attended. Yet again, an establishment ‘story’ about the Labour leader collapses under rudimentary diligence.

A little later we have a man accused of playing a fundamental role in the deaths of millions counselling the present foreign secretary. And not a peep from the press:

So wait a minute; Corbyn gets condemnation for not laying a wreath at a cemetery where terrorists AREN'T buried, but Hunt is merrily parading his links to a coup orchestrating war-criminal as if that's a positive thing?

Hilarious. Just a week or two ago, Jeremy Hunt was lecturing Jeremy Corbyn on who he hangs around with… https://t.co/breyDWZwuk

Historian Grandin considers attributing three to four million deaths to Kissinger a probable understatement. Yet, this is the man Hunt is going to for ‘tutoring’ as the new UK foreign secretary.

But that’s all hunky dory for the mainstream media who are too busy systematically trying to destroy the Corbyn movement. We need to stand up, be counted, and fight this onslaught.

– Keep the pressure up. Discuss the key policy issues respectfully with family members, colleagues and neighbours. And keep organising! Join (and participate in the activities of) a union, an activist group, and/or a political party.