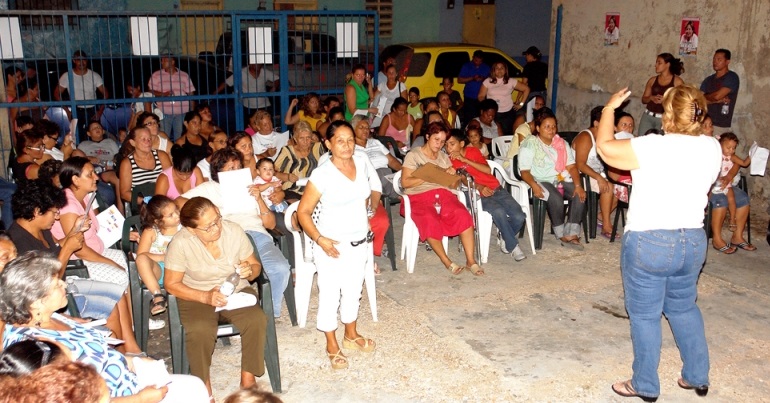 Venezuela’s back in the news due to its economic woes. But amid all the bad news, there are important stories that are not making it into the international media. So The Canary caught up with an expert on the Venezuelan political process to find out more.

The Canary spoke to Cira Pascual Marquina, a political science professor at the Universidad Bolivariana de Venezuela in Caracas and a staff writer for Venezuelanalysis.com. And with Venezuelan inflation making international news amid harsh US sanctions, she insisted that the problems were not a result of socialist measures. Instead, she stressed:

The crisis in Venezuela is an expression of the crisis of capitalism worldwide.

while Venezuela has moved away from free-market capitalism, its economy is hardly socialist. The private sector, not the state (and still less the social economy), controls the overwhelming majority of economic activity.

What has perhaps hit Venezuela the hardest in recent years are low oil prices. But what makes this worse is a decades-long system of oil dependency (which preceded the current government). International debt, meanwhile, has added to this situation; as have cut-throat US sanctions which are largely punishment for the current ‘Bolivarian‘ government’s insistence on independence from US interference.

But while the international media and political establishments continue their crusade against Venezuela – blaming its woes on ‘too much socialism’, commentators on the left like Pascual Marquina insist that the problem is not enough socialism.

What the media refuses to talk about…

But the argument that Venezuela’s economy is socialist is just wrong. Pascual Marquina, for example, stressed to The Canary that the non-capitalist forms of the Venezuelan economy are a tiny minority – highlighting that partial state ownership of some sectors is not the same as worker ownership.

You’ll rarely hear that in the corporate media, though. Nor will you hear about the part of the economy that actually is socialist. As Pascual Marquina explained:

a shoot of socialism would be the communes, and those are way below 1% of the economy

Having seen first-hand how this small part of the economy works, she believes the commune system is a key part of the change Venezuela needs today. She stressed:

only a radical change will get us out of the current crisis.

The international media and its ‘get Venezuela’ campaign

The international media obviously has a clear objective to undermine – and to finish, basically – the Bolivarian process.

And that apparent aim is clear to many outside Venezuela too:

Glaringly absent from @BBCNews coverage of #Venezuela is analysis of crippling US financial sanctions and Washington's aim to bring about a US-compliant government in Caracas. BBC 'impartiality' in action. pic.twitter.com/ujcudP7xRe

And she pointed out that Venezuela is:

With this in mind, she gave the example of the key role that corporate media outlets played in the 2002 right-wing coup attempt in Venezuela – which came a year after a new law allowed peasants to take over unused private land.

Another thing the media avoids talking about is the left-wing proposals for solving Venezuela’s current crisis. As Pascual Marquina explained regarding a lack of reporting on Venezuela’s communes:

Why should they do it? It wouldn’t satisfy any of their objectives – which are mostly, as I said, to finish this project.

But as she stressed, from a left-wing position:

And others think the same way.

Communal spokesman Angel Prado, from the El Maizal commune, recently insisted that “the commune holds the solution to the crisis we are living through”.

So what are the communes?

Pascual Marquina explained how Hugo Chávez made steps around 2006 to try and move towards socialism. New ‘communal councils’, for example, would allow communities to solve basic problems themselves, with financial support from the state. Communes, meanwhile, would bring these councils together so they could make decisions themselves about how to legislate and use communal property. Pascual Marquina stressed:

In a commune, the property that is developed through the commune is social. And through democratic processes of organisation, people decide what to do with that property and what to do with… the surplus.

But the communes aren’t under the control of the state. One commune Pascual Marquina knows well, for example, is in the 23 de Enero neighbourhood of Caracas. It initially got a lot of support from the state to build a factory, bakery, and other initiatives. Tensions arose, however, when the state built a factory that local people didn’t see benefiting the community; so they expropriated it. And the state accepted the expropriation.

In short, the communes are independent, and their relationship with the state isn’t always plain sailing.

Communes aren’t perfect, though. And Pascual Marquina recognises that. She described how people coming together and agreeing what to do isn’t easy, but that when communes work, they “really work”. As she explained:

In this context of crisis, it is true that many capitalist endeavours have actually come down… private businesses have actually had problems, and the communes have actually been able to overcome the crisis. So to me, it shows that it’s actually a better alternative for a country… which is going through a crisis…

The state should encourage popular organisation and popular production.

Let Venezuela solve its own problems in its own way

The international media consistently lets us down in its coverage of Venezuela. So one thing we must all do is to ensure we question the lazy ideological narrative of most Western media outlets. We must always question their bias, and seek out reliable alternative perspectives from people actually on the ground.

The attacks and bias of the corporate media will continue. There’s little doubt about that. But we can all play a role in fighting back against them.